What Do You Do If You're Bored? Build A Twin-Motor VW 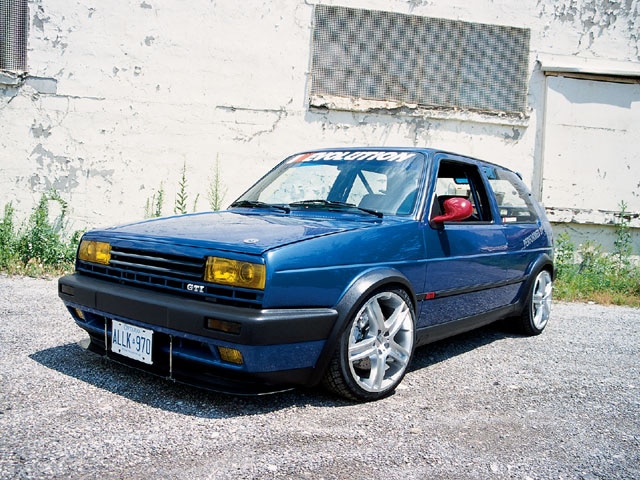 Let's play a little numbers game. Number one: to be at one with yourself, to indulge in a one to one, to be someone's one and only. Number two: It takes two to tango, the terrible twos, and as the Rob Base & DJ EZ Rock sample goes, "It takes two to make things go right." And if I may continue to paraphrase, "It takes two to make it out of sight!" Which brings me quite swiftly to this second-generation Volkswagen Golf.

It may not be as covert as some of today's Q-car Volkswagens, but it's still a mere lamb in comparison with what lurks under the hood-and as it happens-inside the trunk, too. At this point, I must point out that, as a child, both my mother and father would regularly accuse me of bending my findings, imagining the unimaginable, and blatantly lying through my teeth. Which is why I can just see my mother now, glaring at me, hands on hips, "What have I told you about lying, Jonathan?" But it's true mother, honest it is. For the first time in my life, I'm telling the truth. There really are two engines in that car.

My mother may continue her skepticism, not entirely convinced of my talk of two engines, two this and two that, all in one car-but you believe me, don't you? After all, it's not an entirely revolutionary practice to go and cram two engines into one automobile, but then again, it's not exactly commonplace either.

In America, it's a little like fighting talk, with not much else to back up the tall tale, while such talk of two into one in Canada adds up to nothing more than an urban legend. A bit like them Canadian Mounties, right? Anyways, I stupidly made a bet in a bar one night-up in Canada with some of the locals-admitting that I'd happily eat my own hat if I ever came close to either of these gross conducts of perjury. As it so happened, the very next day, there I was cruising downtown Toronto in such a car.

Did I eat my hat? Well, no-but I sure did take it off to salute the tuning firms behind this amazing creation, a combined initiative of Eurospeed, Fast Lane Motorsport, and, the brainchild of them all, Evolution Racing. Situated on the corner of Dupont and Dufferin in Toronto, Evolution Racing is run by brothers Fernando and Tito Tora, the latter being the man behind the myth. A myth that has since been turned into a howling 400-horsepower all-wheel-drive rolling reality.

Truth be known, I would have not only eaten my hat, but also my shoes, jacket, and underpants just to spend another hour in the passenger seat of Tito's twin-engine Golf. If anything, to find out how on earth he got a whole bunch of clashing parts to work in true harmony. Tito could write a whole book on how the concept came to fruition, how he set about convincing his team that he hadn't totally lost his marbles, and how he lavished his life's savings on what others claimed to be a total waste of time. But we only have four pages, so a condensed explanation is to follow.

The main ingredients were a Forrest Green Golf II, already fitted with a 2.8L VR6 lump up front, a huge box of components, and a second VR6 engine, sourced from a crash-damaged Golf.

I don't really have to explain the huge amount of time and energy involved in parking a second motor in the rear, but the level of craftsmanship does deserve endless recognition. Both motors are pretty much stock, with EIP cylinder heads, stock transmissions accompanied by two ACT race-derived clutches, and a duo of custom headers, both of which trail into one silencer and tip.

Although two identical tailpipes exit at the rear under the red Mattig diffuser, only one acts as a silencer. The other pipe acts as a duct for the PRM cold-air intake, inspiration drawn from Porsche. Custom-made aluminium radiators, complete with modified fans, provide separate cooling for each of the engines; the combined power of which is calculated at 400 hp. No slouch by any means, especially when you consider the extra weight this Golf has to haul around.

Aside from the rear VR6 occupant, the inside of the CP Auto Body-painted Porsche Blue Mk II Golf is dominated by two cloth limited-edition Recaro front seats, an airbrushed Corrado dash complete with liquid crystal Stack cluster, a JOM quick-release Raid HP steering wheel, and a sexy-looking bootless VW Motorsport gear shifter. Shifting through the gears with this setup is a tender operation, with four cables being employed to run both five-speed transmissions. In time, Tito will surely be able to fire through the tranny with lightning dexterity, but current confidence is conservative. After all, it's in the early days and the boys at Evolution are taking this shake-down time very seriously indeed.

Intense attention was also paid to the potential passengers of this VW, the lucky two are shackled by Sabelt four-point harnesses, not unlike the Golf that is braced together by a Eurospeed four-point custom rollcage. Outside, the clean lines of the '91 Golf have been unsettled, Tito kept the appearance pretty much as Volkswagen intended-aside from a few obvious trades here and there. Gone are the stock mirrors, replaced by red Mattig RS items, sparking off the flurry of other subtle body mods. The '90-spec factory bumpers are now accompanied by rolled G60 arches and a full European Rallye front end, lit up by funky yellow JOM fog lights. Down below you also find an ABD front splitter. Outback, Tito's twosome Mk II has been treated to upper and lower ABT spoilers, tinted rear clusters, a smooth trunk, resituated number plate, and a hybrid badge-blending Audi and Volkswagen. Tito has also removed the door handles, added solenoid-entry, homemade pop-out rear windows and repositioned the aluminium motorcycle gas cap and filler neck. As such, a purpose-built fuel cell was required, located where the feet of rear passengers once dangled. The battery also up and left its conventional residence and can now be found in the back quarters of the Golf.

The cleanliness of this environment really does make the rear-engine upgrade look easy, a simple modification, but isn't it always the way with perfection? So we've got two motors, two of everything else; how does it handle, stop and go? In response, it goes very well, very well indeed-and stopping, it does that pretty well, too.

Behind the 205/40-17 Kumo Ecsta coated 17x7-inch MOMO Italy rims, you'll find 11.3-inch Brembo discs, EBC pads, and Neuspeed braided brake lines. Tito has also fitted a trick hydraulic line lock-the adjustable red lever found between the two front seats-which pretty much acts as an emergency brake. As for the handling, with a Weitec coilover suspension kit (modified fronts for the rear) and Neuspeed strut braces on hand, how could you honestly go wrong? Actually, the only aspect of this incredible conversion that went wrong was the part where everyone aside from Tito thought two into one wouldn't go. How wrong were they, eh?

As you can imagine, Tito is one happy man. He proved a whole bunch of people wrong, set yet another benchmark for quality and craftsmanship, and became, quite possibly, the first to ever successfully execute a twin-engine Golf in North America. For this alone, Tito Tora, we salute you-not once mind you, but twice. 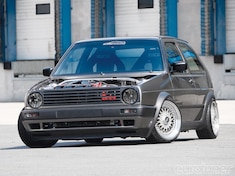 While being open for only a few months, the crew of Phantom Autowerke were able to transform a beater car into this 1991 Volkswagen Golf GTI VR6. Currently it produces 235 whp thanks to the all-motor VR6 engine. Find out more here at Eurotuner Magazine