Not Afraid Of A Challenge, Amir Rosenbaum Decided To Attempt A New Land Speed Record In His Ferrari F40 By Reaching 225MPH.

Established in 1972, the annual Virginia City Hill Climb (VCHC) is one of the oldest and quirkiest club races. Begot by the Ferrari Owner's Club, the 5.2 mile race snakes through 22 turns from Silver City on Route 341, ending at the door of the sheriff's department in Virginia City, NV. Few of the 22 turns have guardrails, but there have only been a handful of fatalities... 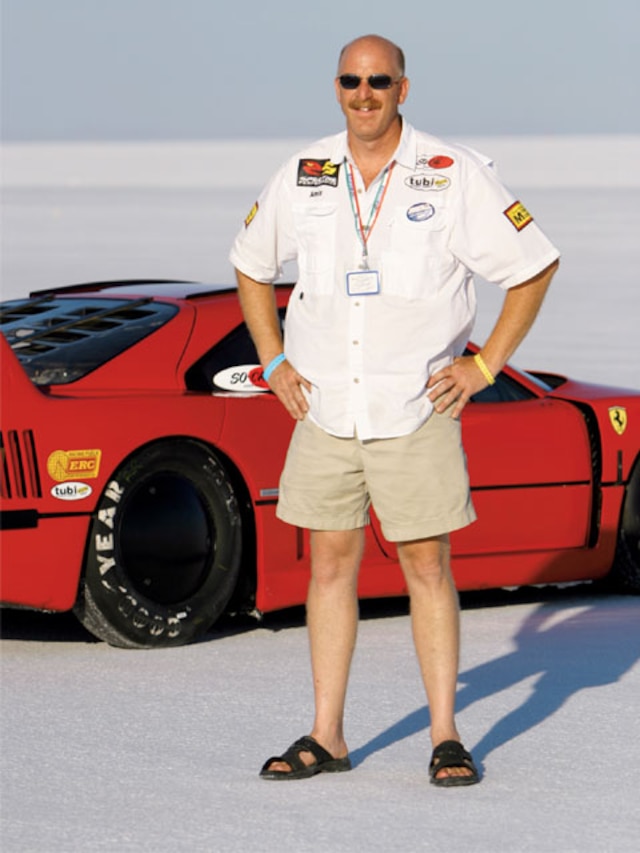 Only 70 entrants are allowed and while originally it was exclusively for Ferraris, the last 10 years have seen other makes allowed, from supercharged Vipers to Ruf Porsches.

The drivers compete in multiple runs but the times are kept secret until Sunday night, when the fastest are finally announced to all. For 13 years, Amir Rosenbaum battled this hill in an '86 Testarossa, a '93 512TR and, for six years, a leased '92 F40. Finally, he set the fastest time ever of 3:10:53 with an average speed of 98mph in 2002 driving the F40. At one time he was even radar'd entering a 25mph-posted turn at 140mph!

According to Amir, his secret was focus.

"I'd gone to enjoy myself so many times, but in the end I wanted the fastest time, so that's what I focused on. When you're in the groove, everything is silent and happens in slow motion, and that's exactly how it was."

Amir's never been afraid of a challenge. He panned for gold for three years until that get-rich-quick scheme panned out. He then attacked the VCHC for 13 years until he was king of the hill. Now, Amir Rosenbaum has set his sights on a land speed record at the famed Bonneville Salt Flats: all in a day's work for the owner of SpectrePerformance.com 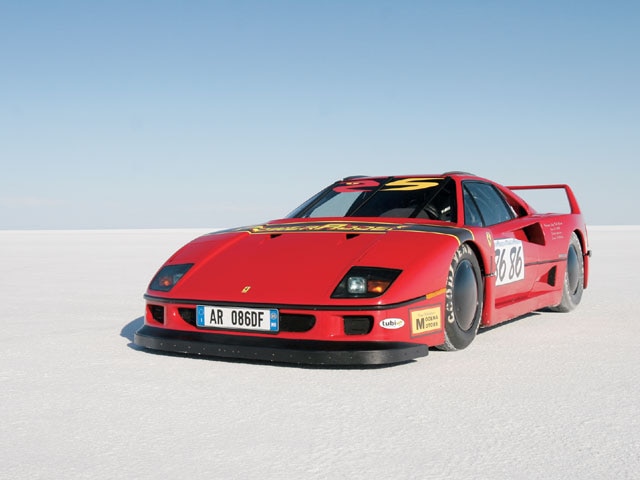 So Amir decided to head west; 120 miles due west of Salt Lake City, to be precise, to the Great Salt Lake at Bonneville.

People have been setting speed records on the salt almost since the automobile was invented. Ab Jenkins made it famous in the '30s in his Duesenberg-based Mormon Meteor. The Southern California Timing Association (SCTA) arrived in 1949 and almost every outright land speed record has been set there ever since.

Bonneville Speed Week is the place to set a record and hopefully gain entry into the famed "2-Club." According to the SCTA, there have been more people in space than have gained membership of its 200mph Club. 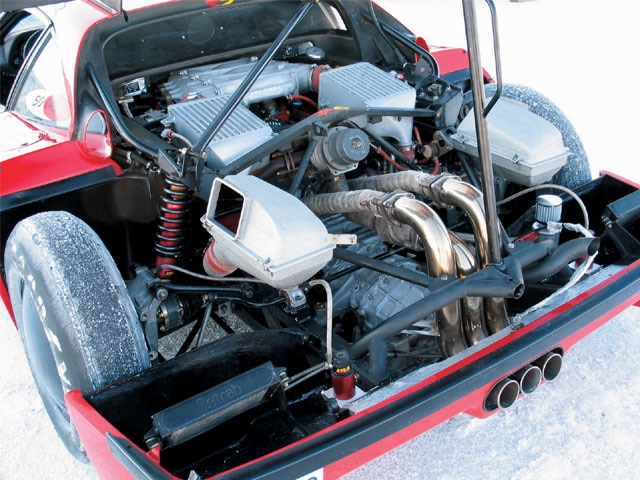 Photo 3/20   |   Bi-turbo 2.9 liter V8 was fitted with bigger turbos to reach 650hp but Spectre air filters equally as important to keep salt out of the motor - it gets everywhere

Two-twenty-five isn't all that fast when you say it quickly, but as any old salt racer will tell you, "Bonneville ain't easy."

The course is "mostly" hard-packed salt, but as the sun rises and the salt dries, the consistency changes. It's blisteringly hot, sometimes 120F, but it can rain just as quickly and on top of that, you can wait all day to make one run and if something goes wrong, you have start over.

We're getting ahead of ourselves, though.

To prep the F40 for Bonneville, Amir (who now owned the car, rather than leased it) turned to salt racing legends So-Cal Speed Shop in Pomona, CA. 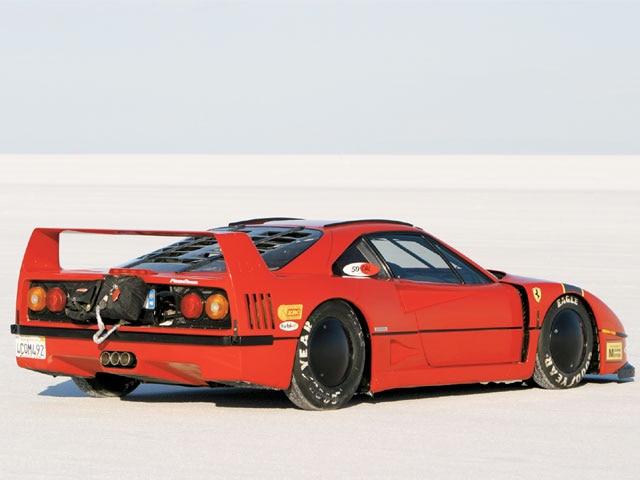 Under the guidance of founder Alex Xydias, So-Cal has been setting records since 1947, most recently with a fleet of Ecotec-powered GM racecars. To comply with the SCTA rules, So-Cal built a seven-point rollcage for the F40, complete with Hans device. They also added dual fire suppression systems: one for the driver and one for the motor, along with a solid aluminum firewall. They then added twin parachutes.

Why the 'chutes? Well, big, wide Pirellis don't work on the slick surface at Bonneville. Experience has shown that records are broken on skinny tires made tractable by weight - and lots of it. In this case, 136 lb of ballast was added. Next year, Amir admits, as much as 1000 lb may be used to prevent the car from "floating" on the surface.

High-speed, skinny tires are hard to find, so 15" Goodyear drag tires were mounted on steel wheels with Moon disc covers. Small wheels mean the F40's 15" brakes had to likewise be trashed; big brakes are worthless with slim tires on a slick surface. Hence the parachutes...

To get the feel for flat-out speed, Amir made some trial runs at El Mirage dry lakebed, 100 miles northeast of Los Angeles. Hot rodders have been racing there since the '30s and still do. The record for the 1.3 mile course is 305.809mph. The surface of the dry lake is similar to a pie crust: a hard, thin surface with soft dust underneath. This was a great opportunity to test Spectre's High Flow Air Filters, which worked extremely well, despite the rather abysmal conditions.

On his first runs, Amir managed 180mph in less than three-quarters of a mile and practiced popping the 'chutes. The dust gets everywhere, even in places you've only seen with a mirror. It makes a complete mess of your car.

It ain't as bad as salt, though. Salt is worse because unlike dust, it rots your car; especially if the Bonneville lakebed is flooded, which it often is. In August '06, however, the salt was good for racing: hard and smooth.

New gears had been installed, giving the F40 a theoretical top speed of 300mph at 8000rpm. And, because of the high gearing, a push-truck is used to get the car up to speed and accelerating fast. Even though you have a lot of room, you need to get up to speed.

Rookies, newbies to the salt, have to run on a short 3-mile course and make a safe run exceeding 175mph in the first timed quarter mile. Amir soon graduated to the 7-mile course, only to discover the front suspension geometry was wrong. Not anticipating this problem, precious hours were lost finding the necessary parts and equipment to affect the correction. Finally, after a frustrating weekend, the eight driven wheels of Spectre's Dually were churning up the salt, pushing Amir's butt and the F40 across the salt. Once the Ferrari was up to 50mph, the truck peeled away and Amir was on the gas. The puck was proverbially smacked.

Photo 16/20   |   The push-truck peels off the course and the F40 is away, target 225mph. The course is so long and the lakebed is so flat that the cars disappear out of sight over the curvature of the earth

Because of the steep learning curve at Bonneville, his speed was down on Tuesday, but on Wednesday he hit 217.950mph and by Thursday his exit speed was 221.005mph. And suddenly, it was over.

Amir felt he'd achieved as much as he could at that time. Basically, he needed more horsepower, so the winter was spent going through the motor. It had been fatigued by hillclimbing and bumped from around 425hp to something in excess of 650whp without so much as a rebuild.

Oh, we almost forgot: He purchased a proven 350mph streamliner record car that he hopes will reach 400. What a guy!