There Was A Time When Frank Hart's Oil-Burning Corrado TDI Coupe Would've Been Ridiculous, But Now It Doesn't Sound So Bad

Within any group of brand-loyal diehards, there are always smaller sects who stick to a certain model or engine within that range. Audi has its five-cylinder loyalists and BMW has E30 fanatics, while VW has diesel engine and Corrado enthusiasts. And it follows that somebody who's infatuated with both and has the mechanical ability to combine his passions means you've got a sure-fire winner. 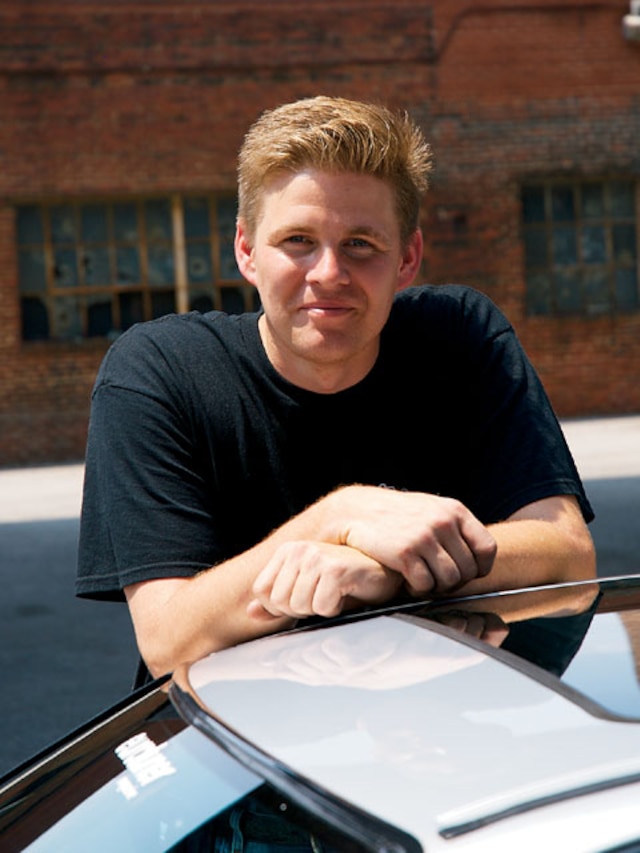 Frank Hart is just such a person to tackle this uniquely juxtaposed engine/chassis swap. He's a Corrado guy through and through, who's owned no fewer than 15 of these coupes over the years. However, his conversion to the TDI religion occurred in 2001, when a friend's chipped Mk4 TDI kept pace with a worked Corrado G60 and still returned 50mpg.

However, the ultimate Corrado has always been the VR6 model, so when presented with a great deal on a '92 SLC VR6, he jumped at the chance to own it. Yet things weren't quite as they seemed.

"I bought it in the middle of winter and it had what I thought was condensation coming out of the tailpipe. Little did I know it was actually oil," Frank told us.

Efforts to correct the problem went from bad to worse, with each more complicated repair yielding zero results. A warped block was ultimately diagnosed as the culprit. 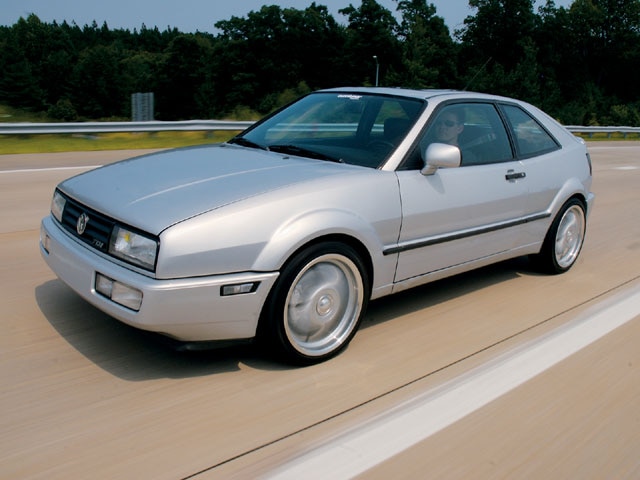 "In the end, I was tired of working on it," Frank reported. "I could have easily swapped in another block, but I sold off the powertrain parts and left the car to sit while I concentrated on a 20v G60 conversion with stand-alone engine management."

In the meantime, a TDI swap had been playing on his mind, but the scarcity of low-mileage motors and the high price of anything with a TDI badge meant it was a costly dream, at best. However, fate would intervene when Frank planned a big step for his primary project. "On the day I planned to take all my money and put it towards SDS for my 20v G60 project, I found a great deal on a TDI," he said.

The '99.5 Mk4 Jetta TDI was damaged on all four corners and he had to tow it home. After the VR6 fiasco, the Mk4 powertrain was thoroughly tested.

Some might consider it overkill to repair a car you don't plan to use in order to check the motor, but as a bean counter for the city of Norfolk, NC, Frank always plans ahead. 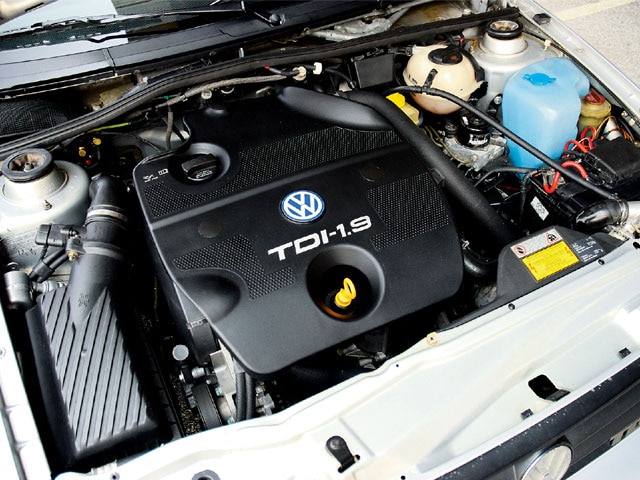 Photo 3/17   |   Looking like it belongs, the 1.9 TDI took ingenuity and perseverance to get it there

Once everything checked out, the complex task of installing the TDI engine into the Mk2-based Corrado began. As you might expect, wiring proved to be the biggest obstacle, especially since Frank didn't want to cut any additional holes.

"Whenever I got fed up working on the wiring, I'd work on the mechanicals," Frank continued. "Bolting the motor into the car was probably the easier part of the process, but whenever I thought I had it figured out, there would always be an obstacle. I built the pedal cluster twice because on my first attempt, I built it with the Mk4 brake booster, but it turned out to be too large and interfered with the Corrado clutch master cylinder. There were so many different issues like that."

Some of those "little" problems included matching a variety of brake lines to install ABS in the SLC. "I had a tough time figuring out the lines going from the G60 master cylinder to the Mk4 ABS module. You have a 10x100 fixing on one end, and 12x100 on the other, so you have to make a hybrid line. Fortunately, I decided to go rummaging through a junkyard and I eventually found a Passat I was able to pull lines off," Frank said.

"The ABS works great. The Corrado's older ABS, when it would engage, would feel like you had square tires. But this new ABS just gives a light pulsation and actually keeps the car straight," he enthused.

Fueling was also an issue, since the stock VR6 tank and pump wouldn't work. The fuel pressure would be too high, and the diesel pump nozzles wouldn't fit the filler neck. With limited options, it was time for a little ingenuity. "I removed the tank, cleaned it out and used a Dremel to enlarge the hole so the fuel nozzle would fit," Frank said. "I tried locating a Mk3 TDI fuel sender unit but ended up using the VR6 sender and regulated the pressure down."

An intercooler was sourced from a Corrado G60 (what else?) and Frank fabricated the piping. The intake manifold was cut in half and re-welded so the inlet pointed toward the driver's side, while the downpipe was extended to prevent it rubbing against the heat shield.

With all this going on, one of the biggest issues involved the rear motor mount. It was fouling the turbo, so a VNT-20 Variable Nozzle Turbo was installed. "The rear mount was the biggest mechanical obstacle. The VNT actuator had to be bent out of the way so it wouldn't rub on it, and you have to cut a crescent in a Mk3 2.0 motor mount bracket so the turbo has clearance. Working all that out was incredibly frustrating," Frank continued.

A billet aluminum piece will eventually eliminate the modified 2.0 bracket, since the TDI's massive torque has already broken it during a track session.

"I had been planning to upgrade the chip and injectors anyway, but the turbo upgrade came about as a result of other issues," Frank explained. However, the result is a dyno-proven 140hp and almost 250 lb-ft to the wheels.

The turbo itself is a hybrid Kerma VNT turbo, consisting of a VNT-20 compressor wheel and a VNT-18 turbine resting inside a machined VNT-15 housing. Kerma PP520 injector nozzles and an Alligator chip ensure a proper fuel mixture, while spent diesel exits through a stock TDI exhaust and SLC muffler.

Keeping the torque in check is a G60 flywheel, VR6 clutch and a B4 Passat 02A transmission with a 0.68:1 fifth gear, plus a Peloquin differential. Other upgrades, such as the classic 17" Abt A23 wheels shod with 205/45 Yokohama AVID H4S rubber, provide an updated look for the daily driver.

H&R coilovers keep the handling crisp, but were also crucial to support the weight of a full tank of fuel.

"There are some good body kits for the Corrado, but most make 'em look like cheap hookers," Frank stated bluntly.

Inside, the Mk4 TDI cluster was used, but only when no other options were available. "I'm one of the few people who likes the green lights in the Corrado dash, but I'm not a huge fan of the blue Mk4 lights," he said. However, a Becker Traffic Pro head unit provides an OEM look, and matches the red and blue illumination.

Looking over the car, it's hard to believe VW didn't build it this way. The well-planned and executed swap has stood the test of time, and Frank plans to put miles on the car just as fast as he can. "I've put about 20,000 miles on it since I completed the swap," he said.

At the end of the day, why do a swap? After all, you can buy a factory TDI and save yourself a mountain of trouble. "You just don't get the same Dub-love when you drive the newer cars as you do an older Mk2 or Corrado," Frank explained. "I get waves from other VW guys and you just don't get that in a Mk4 or newer cars."

Frank must be feeling the love, because he's already begun a second TDI swap, using a G60 shell and Mk3 motor. With gas prices the way they are, he might just be on the cutting edge of the latest trend in motor swaps.

Thanks: "The Wife," Sonny and Kev Lowe (www.sloweracing.com), Will and the guys at Checkered Flag VW, Kolton and all the www.sevenfivesevendubs.com peeps