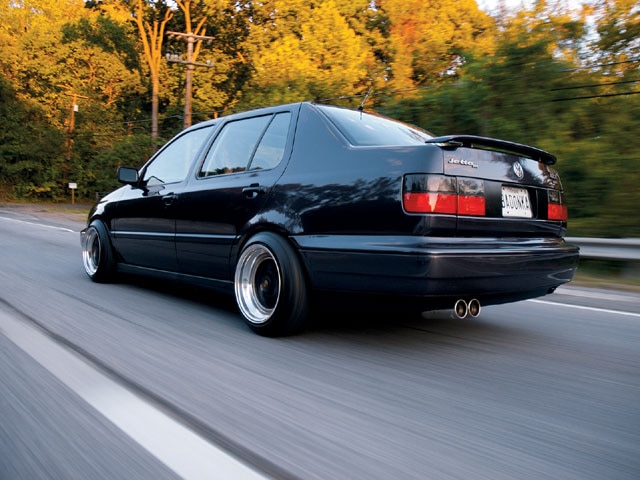 There are two ways to build a project car. The first way is with money. Depending on your hopes and dreams, this can easily surpass $10,000 in parts and labor. The second is to do it yourself. Most of us can turn a wrench and read a manual, but what about the more complicated tasks, like an engine build or bodywork? And let's not forget about the time you need to learn and complete these jobs.

Not all of us are masters of such crafts, but gentlemen like nate baugher give us hope. He had the courage and patience to dedicate an enormous amount of time to his project cars in order to create something marvelous with his own bare hands. 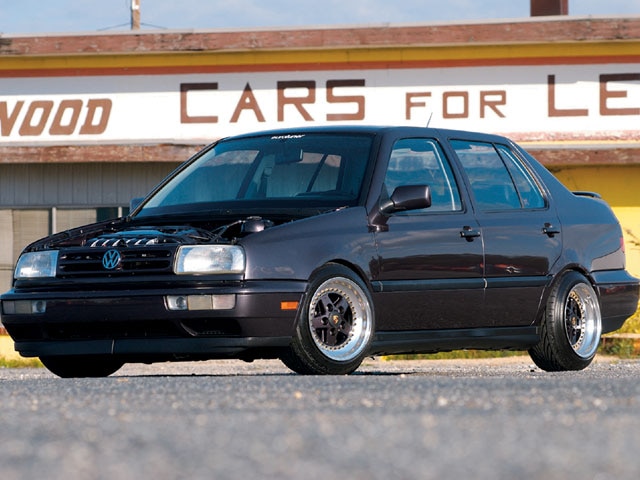 His latest masterpiece is this rare dusty mauve '95 jetta glx. And the most surprising thing about it is it only cost him $6500, and that includes the price of the car! Working on your own car can go a long way and nate's story proves it.

His tale begins years ago when he used to work at ngp racing in aberdeen, md. At ngp, he helped with marketing and design work but also developed an aptitude for powdercoating and advanced mechanics. 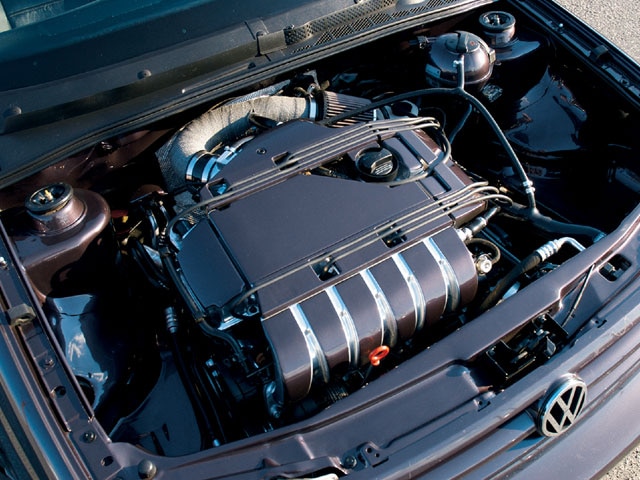 He used to drive an audi a4 everyday but was plagued by unfortunate crashes. So while the audi was in the shop, he'd borrow his dad's mk3 jetta, which wasn't really driveable at the time. Nate repaired it so he could get around, but in the process he fell in love with it and eventually bought it down the line.

Coincidently, one of the reasons his father bought the car was that nate's previous project was also a tuned mk3 jetta. And while this new project started as a commuter, things eventually snowballed. "it was just a means of transportation at first but once i got into it, i started to appreciate it more," he explained. "it was also my dad's car so it meant a lot to me, as he was the one who got me into vws." 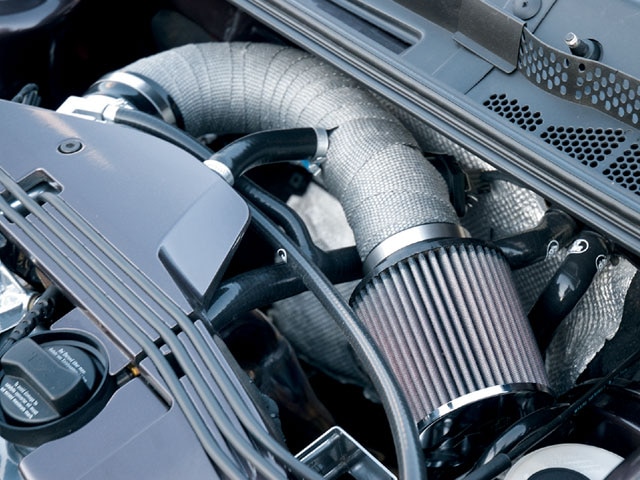 Working at ngp had its benefits. Free shop time and tool access allowed him to work on the car without wearing a hole in his wallet. All nate had to buy were the materials. Another benefit was the support he had during the build. Whether it was sharing ideas, helping with an install or receiving advice, the experts at ngp made the project easier.

The madness got started with a simple cylinder head job. "i had the resources to rebuild it, so i sent the head out to a machine shop," he told us. "then one of the guys helped me with a full bottom-end rebuild. I took a grinder and removed all the screw holes and casting marks. The sides of the engine block and head are now ground flush, making it look like one piece."

Nate followed the same pattern on virtually everything in the bay. "anything that wasn't mandatory was shaved off and cleaned up to give it a sleeker look. I did a bunch of stuff the average person wouldn't know."

On the intake side, the gasket and runners were matched to both the head and the upper intake manifold. Even the plastic trim pieces were smoothed to remove any hard lines. "unless you put two vr6 engines side by side, you'd never know."

The stock battery occupied too much space so nate relocated it to the trunk, using a slim odyssey battery to save space. 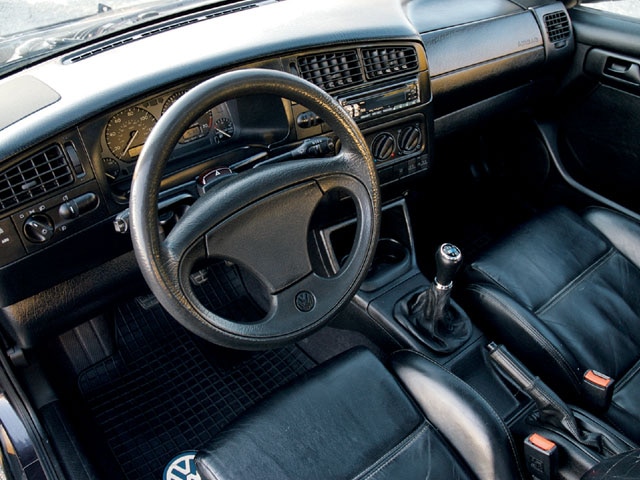 The next order of business was to relocate the power steering. Since it mounts to the battery tray, which had been removed, he placed the steering reservoir sideways on the outer frame rail to hide it. Various coolant hoses were connected to keep it running right. Other things deleted along the way included the egr valve and secondary air pump.

Perhaps one of the most difficult aspects of shaving an engine bay is the wiring. "a lot of people with smooth bays end up spending lots of time re-routing all the wiring," he noted. "they usually lengthen it and run it through the frame rails but that's a pain in the ass if you ever need to get at them. So i tried to make the factory harness go where it needed to be, but stay hidden. I only had to lengthen three wires in the whole engine bay, which saved me a great deal of time, and i can still unplug the harness if i need to."

If nate couldn't hide some things, he'd find a cover to hide the untidiness; hence the latemodel corrado thermostat cover.

All that smoothness without performance modifications wouldn't be righteous, so an obx header, fk exhaust and custom intake were installed to gain a little extra power. And rest assured, more upgrades are on the way

The transmission components received similar shaving, getting sandblasted, ground and powdercoated. While the transmission was out, nate rebuilt it with a new clutch, lightened flywheel, smaller corrado shifter weight, mounts and bolts. Even the side-mount arms were shaved.

Once all the work on the tranny was done, it was powdercoated in superchrome. The axles were also powdercoated, and the starter motor was color-matched to the body.

The abs module was cluttering the engine bay, so the control box was tossed. Nate then ditched the original brake booster, slave and master cylinders for g60 parts that don't require abs. As for the booster reservoir, a smaller corrado part was sourced.

The remaining brake components were showing age, so the lines, rotors, wheel Bearings and anything else on the front-end were replaced.

Next came the suspension: nate removed the front subframe mounts and installed new polyurethane parts all around. The subframe, control arms and steering components were then powdercoated, making the jetta even more perfect, while vogtland coilovers gave the jetta its slammed stance.

With all the detail underneath, you might wonder why the exterior remains fairly stock, except for a golf cl front lip. But like the power upgrades, nate has more plans in store for the outside, particularly custom fenders and a full respray.

For now, the real drama comes from the wheels. "i knew the bay was going to be the focus, so i went with 15" wheels to keep the car as low as possible," nate revealed. "i wanted a wheel that wasn't a dime a dozen."

After two months of searching, nate uncovered a set of gotti wheels that were conventionally used on porsche racecars in the '80s. "they were sold online as 15x8" front and 15x9" rear, which would have been perfect. However, they were actually 9" and 11" wide when i got them and turned out to be way too big for the car. So i took them apart and swapped the barrels around, which made them 15x10" all round." Nate also refurbished the wheels to look brand new, and used 25mm adapters to fit the vw hubs.

Finding tires wasn't an easy discovery either, but nate came across a set of 215/45-15 toyo t1r tires that barely stretched over the 10" wide rims.

Although nate's jetta remains under construction, he's reached a level many of us only dream about because we don't have the skills or time to get there. And let's not forget, he's spent less than $7000 to buy and create this mk3 masterpiece. Imagine that.

Read all about a Custom 1995 Volkswagen Jetta, brought to you exclusively by the experts at Euro Tuner Magazine.