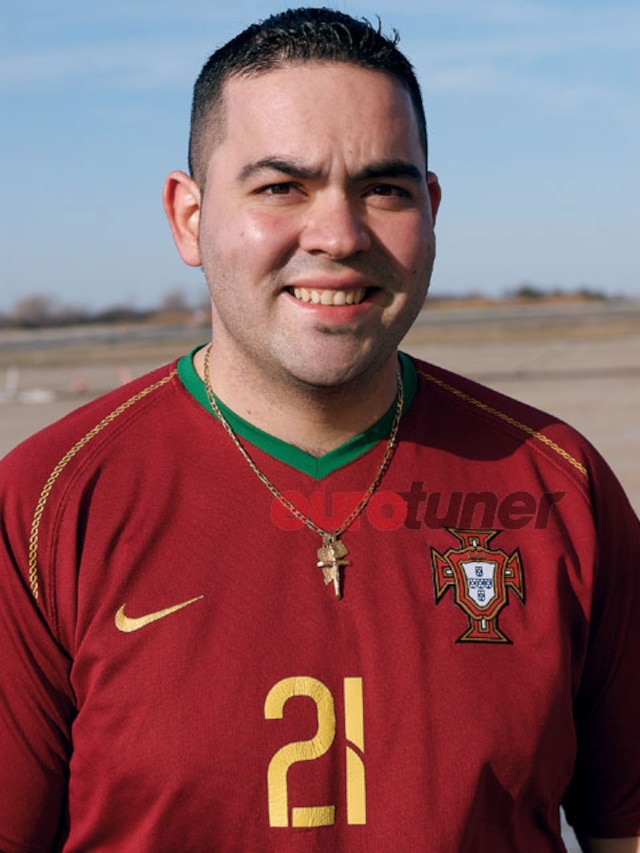 It pays to know people. As much as your college wants you to think that getting an MBA is what will give you an edge in the world, at the end of the day it's all about who you know. This counts for everything in the business world, but when it comes to your personal life, it's a little different. Who you're friends with determines who helps you move, who you BBQ with and who helps you wrench on your car.

Take Jose Silva from Newark, NJ for example. He happens to have a pretty awesome friend whom he's known for many years; he grew up with Diogo Azevedo, who should be no stranger to regular readers (et 2/06). Diogo and his brother Rui (et 12/04) are owners of Azevedo Motorsports and have had a hand in many Euro creations that have graced our pages. Most are pretty wild and Jose's '96 Mk3 VR6 turbo is no exception.

The 29000-mile four-door 2.0 8v was purchased in '99 as a daily driver for several years. "One day I was leaving work and some guy in a pickup blindsided me, damaging the whole right side of the car, from the windshield to the quarter panel. And that's how it all started," Jose said. 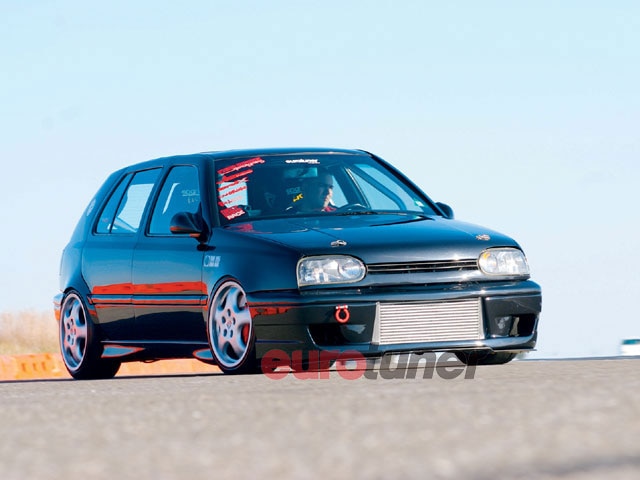 Because the accident occurred on private property, the police wouldn't file a report, which meant a battle to get an insurance payout for the extensive damage. "Luckily the insurance paid but I got really frustrated and decided I was going to build this one, so got a hoopty to drive to work," Jose continued.

Another point that sets his '96 apart is the fact that it is a four-door Golf rather than the more common two-door GTI. "A four-door is nice because people underestimate it," Jose confides. "It's a sleeper."

Knowing the quality Diogo was capable of, he was naturally the first choice when the time came to take Jose's wreck to the next level. The work happened in stages over the past six years, with the first step involving the removal of the stock four cylinder and swapping in a complete VR6 from a '95 Passat. 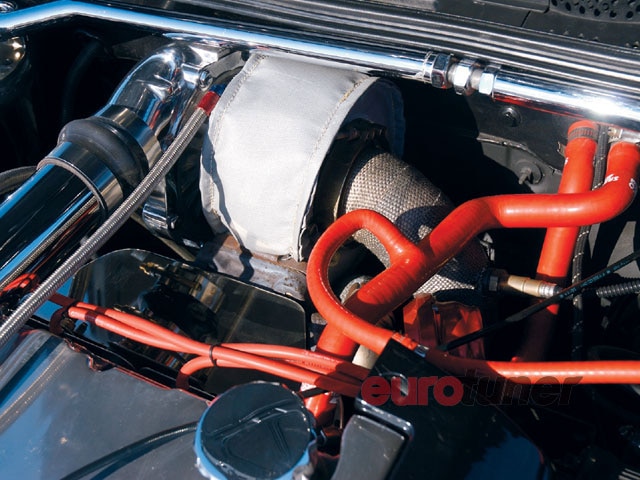 From there, it progressed to a stage 3 Vortech supercharger with a front-mount intercooler, 15psi and 380whp. "The 'charger was great, don't get me wrong, but a turbo has unlimited power," Jose explained. "And for shows, the turbo has wow appeal." It must be a common reaction. The first time we popped the hood on Jose's car, a resounding "wow" was our immediate response as well.

The 2.8 VR6 12v was adorned with an enormous Garrett GT40R turbo and massive Spearco intercooler. The compression was lowered with a C2 Motorsports head gasket spacer and ARP hardware kept everything together. A 44mm Tial wastegate controls boost levels, while a 50mm blow-off valve keeps the turbo spooled between shifts. 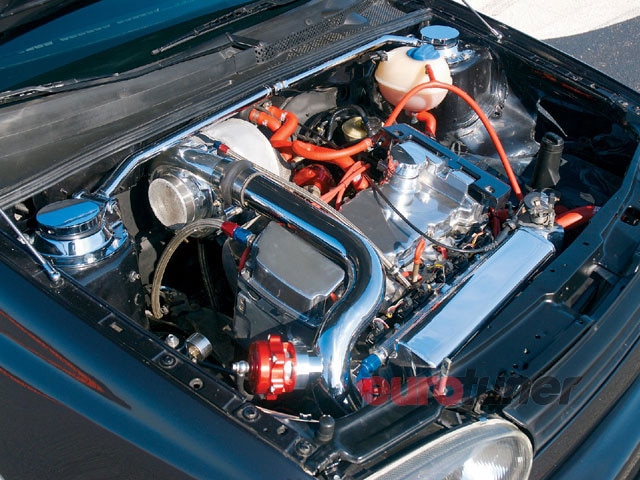 For fueling, an Aeromotive system feeds 550cc Bosch injectors, while combustion is controlled by an EIP turbo chip. Chromed intercooler piping and a C2 Motorsports short-runner intake manifold not only look great but contribute to the massive performance as well.

It hasn't been dynoed in this exact form, but running 18-22psi, Jose estimates over 500 horsepower to the crank. A change to TEC 3 engine management should see even bigger gains in the future.

"The chip is great," he said, "but with the management we can play around with it more. There are certain things you can't tweak at present, but the management can so I'd rather go all out."

The transmission has naturally been upgraded to cope with the torque. It features a Peloquin diff, lightened flywheel and a Clutch Masters race clutch.

With so much horsepower, you'd be crazy to ignore the brakes, and Jose chose some of the best: Porsche 993TT calipers clamp down on 13.1" Brembo rotors up front, while drilled Brembo discs were installed on the rear. Mintex race-compound pads were also fitted all around for the best performance."The brakes do miracles," Jose told us.

Bilstein PSS9 coilovers brought the Golf down to the tarmac, while H&R sway bars keep it flat in the turns. The stock fenders were also flared to keep the wide wheels and low stance from causing pain over bumps or in the turns. "It's nothing crazy like a touring car, but it does have a widebody in the back," Jose explained.

The overall styling choices reflect the same sort of race-inspired approach but with a custom touch. First, the front bumper was replaced with a modified Rieger R-RX part. The giant Spearco core is plainly visible within the front section, and the lower splitter sits inches away from destruction on a bump or driveway ramp. He drives it this low, too!

A JOM badgeless grill and European headlights replaced the stock parts, while Rieger skirts transition into a Mattig rear diffuser and a smoothed Euro bumper. The rear hatch has been completely smoothed, flushed and filled, while Magnaflow tips from the custom Azevedo exhaust poke out from openings in the rear. "We originally shaved the rear door handles, and did A4 handles in the front. I think I showed it once but didn't like how it was so decided to shave them all,'" Jose continued.

A door popper was installed on the driver's side to allow Jose to enter without hassle. And once the work was completed, everything was coated in BMW M3 Cosmos black. The result is a look that's aggressively in yer face, yet smooth at the same time.

Turning our gaze inside, it's pure racer with a dash of show car thrown in. A custom-welded ten-point NHRA-spec rollcage dominates the cabin, with Sparco Evo 2 seats providing maximum support for the occupants, while Momo parts are at hand for driver interaction.

Every beige panel was either swapped out or covered in new fabric - black and red suede now adorns most of the acreage inside, including the headliner. "The headliner is a plush suede material," Jose said. "I did the red and black to match the seats, which had red inserts in the middle."

A wideband 02 sensor display has replaced the temp dial on the heater controls, and along with five more VDO gauges in the center console, it keeps Jose informed of the activity under the hood. To reinforce the race-theme, an ATL fuel cell was mounted in the spare wheel well, and the filler has been flushed into the upper quarter panel.

In order to be a contender at the numerous shows Jose attends, an entertainment system was essential. "If you don't have audio, you won't win," he explained, "so I had to add audio. It's killed the motorsport theme but I needed it for the shows. And it sounds nice."

The equipment and speakers are from Pioneer, Kicker and Farenheit, including an in-dash DVD receiver, PS2 in the glovebox and a trick front/rear enclosure with four monitors that was built onto the rear hatch - with one of the screens fed directly by a small camera mounted in the hatch so people can admire themselves while they are admiring Jose's VW.

Just to be clear, Diogo and the Azevedo crew didn't work on Jose's masterpiece pro bono. Just like any other customer, Jose had to pay to play. But when it came to inspiration and ideas, it certainly didn't hurt to have Azevedo on the team.

Luckily, Jose knew to say "stop" once he had a unique combination of power and style that can just as easily fit in with a VW crowd as attract attention at an import show. Two things that are typically mutually exclusive, but proof that when you know the right people, anything is possible.

Read all about the 1996 VW Golf GTI, brought to you exclusively by the experts at Euro Tuner Magazine.