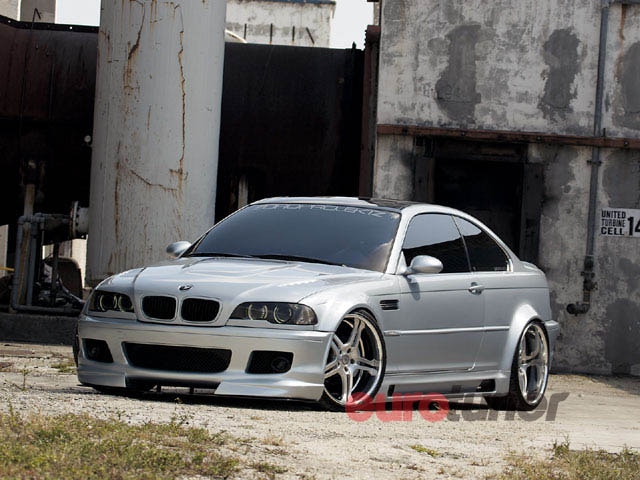 Luis had contemplated a carbon hood because he wanted vents, but opted to create his own based on carbon rain covers from a Vorsteiner part since he'd already invested so much work.

Miami is a city of beautiful beaches, year-round heat, gorgeous women and wild nightlife. In fact, it's one of the only cities in the States where nightclubs are open until sunrise. It's also home to some of the best dance music in the world. Electronica often tops the local charts and that's where Luis Duran uncovered his passion and his career.

With the Rieger side skirts, the center slits were removed to clean up the overall lines. Luis then added material to blend the skirts into the rear fenders. 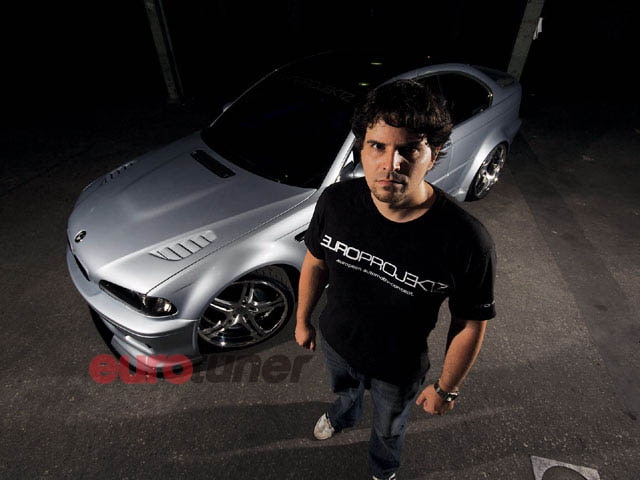 Born in Puerto Rico, Luis moved to Miami at an early age and acquired an infatuation with electronica music. He started playing a synthesizer at 12 and wrote his first song by 14. Throughout his career, he's worked in many recording studios and released over 40 tracks in the mid-'90s. Today, his music has evolved to cater towards TV, radio and advertising agencies, but his creativity remains. "I switched from dance music to more professional music," Luis explained. "I needed an outlet for my creativity so decided to mod this sucker myself."

The sucker in question is this '03 BMW 325ci, his first and only project car. To the untrained eye, Luis' E46 looks like any other modified 3-Series, with an OE M-Tech body kit, five-spoke wheels and lowered suspension. But in reality, there's a plethora of subtle changes to the body to enhance its poise. "I used a lot of Photoshop to help me visualize every move," Luis told us. "It took three years to complete the bodywork." 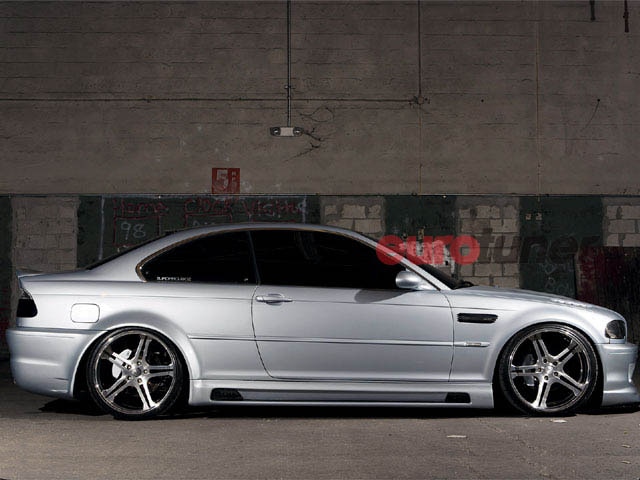 Without any history of working on cars, Luis dived in headfirst with the support of a local bodyshop. "I saw what they were doing and I thought I could do it as well. They taught me the ropes, helped with things like the plasma cutting, but I did the rest, including the welding."

The exterior was completed in two stages since it didn't come out quite right at the first attempt, but an ill-advised encounter with the police hastened the rebuild. "The cops hated my car, especially the window tint," he reminisced. "One day, I was hauling ass, trying to get away from them and drove over a railroad track. The impact destroyed the whole widebody."

Returning the injured 3-Series to his garage, Luis rebuilt the body using a combination of parts from BMW M-Tech and Rieger, plus raw materials like fiberglass, wood, clay and metal. 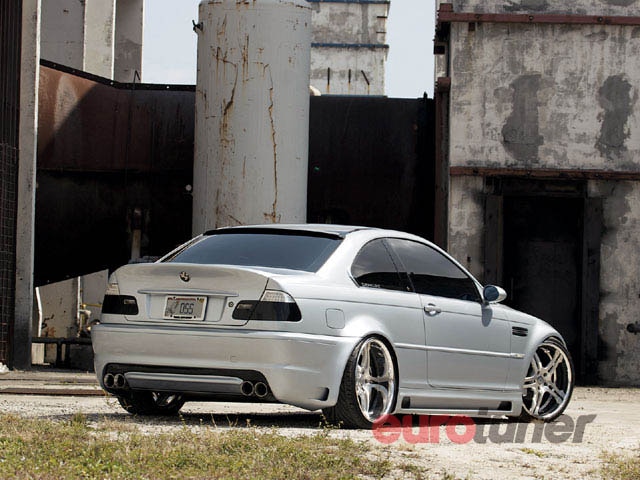 The front fenders came first. These were switched for the more pronounced M3 fenders. Luis then reshaped them to fit his coupe and personalized the side gills to include his own OSS logo - his stage name.

The rear fenders started as two rear fiberglass flares bought from DTM Autohaus in California. Unfortunately, one side was slightly off. "It was a different angle, so I had to slice and dice the fenders," he recounted. "From there I lifted the pieces to change the radius to match the other side."

The craftsmanship of rookie Luis continued to the bumpers and side skirts, which required customization to flow with the new fenders. The foundation is M-Tech parts with a Rieger front lip and side skirts.

Luis then added his own twist. Starting with the foglights, the housings were enlarged to match the mouth in the front bumper. The bumper was then extended down with the new lip. "I made two cuts in the lip that flow with the lines of the headlights," A splitter was added under the front lip and the side markers were shaved to finish the bumper.

Luis proceeded to the E46 M3 hood and widened the kidney grilles. Metal was also added over and under the headlights to create a subtle bser expression.

At this point in the interview, Luis caught his breath after describing all the modifications he'd done. Since he spent countless hours learning the trade and prototyping his own bodywork, he knew every stage and incident like it was yesterday. The rear came next.

"The whole bumper has been extended by 2.5-3 to meet the wide fenders"," he said. "The section from the exhaust pipes to the rear tires was built downwards. The diffuser was then extended to hug the custom quad exhaust."

Luis added vents originally modeled from clay into the bumper to correspond with the openings in the side skirts.

Work commenced on the CSL-style trunk. Using a metal extension, Luis molded the spoiler into the stock trunk to give the rear a sportier appearance.

The final tasks included a Schnitzer roof spoiler on the Jet black roof.

Although exhausted from the bodywork, Luis needed to learn about wheel offsets in order to fill the larger fender wells. "I dialed in the offset and ordered wheels from DPE. They fit like a glove." The rivetless LS5 rims arrived 20x8" in the front and 20x10" in the rear with brushed aluminum faces. Custom offsets allowed impressive polished lips, especially the 5" of lip in the rear.

Finding the right set of tires would also prove challenging. "When you do 20s on an E46 the car can look raked," Luis said. "I had to figure out what tires would allow it to look right. So I used 25-series profiles to keep the circumference the same."

Luis recognized he had to address the performance but also understood the project was limited by its 2.5 liter inline-six and automatic transmission. "If I would have known what I do now, I'd have bought an automatic," he confessed. "But right now, I don't have anything to prove. I just wanted to have fun with my visual ideas."

To liberate some horsepower, a custom quad exhaust was installed along with a carbon cold-air intake. Luis fitted UUC pulleys to underdrive the accessories and uploaded Jim Conforti software to improve the overall power curve. Dinan transmission software provided more aggressive shifting points for the five-speed automatic as well.

Photo 13/17   |   M3 steering wheel and seats, plus suede upholstery butter up the interior

Suspension came next, and Luis used F2Autolife coilovers to lower his 323ci. He then adjusted the camber to improve cornering and combined Turner Motorsport sway bars to reduce body roll.

After Luis felt comfortable with the performance, he focused on the interior. An M3 SMG steering wheel was cleverly retrofitted, allowing use of the paddle shifters.

Looking inside, your eyes are drawn to the silver gauges and silver panels, followed by the comfortable M3 seats with suede centers. The headliner, door panels, pillars and dash were also reupholstered in suede for extra elegance.

With Luis' music background, the electronics weren't going to be anything short of spectacular. "I tore apart the interior and built the whole system out of wood and plexiglass. The components are unbelievable. Music sounds better inside my car than in my studio, which costs thousands of dollars!"

Luis' original vision and craftsmanship have attracted the attention of national car club Europrojektz, for which he now directs on the East Coast. And for his first project car, he's certainly discovered something else he's good at besides making music. 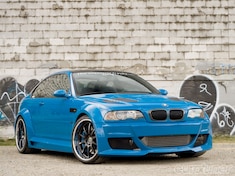 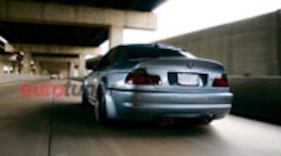