You might not have expected Lloyd Field's aggressive widebody Volkswagen to be a TDI model, and that's exactly the point! 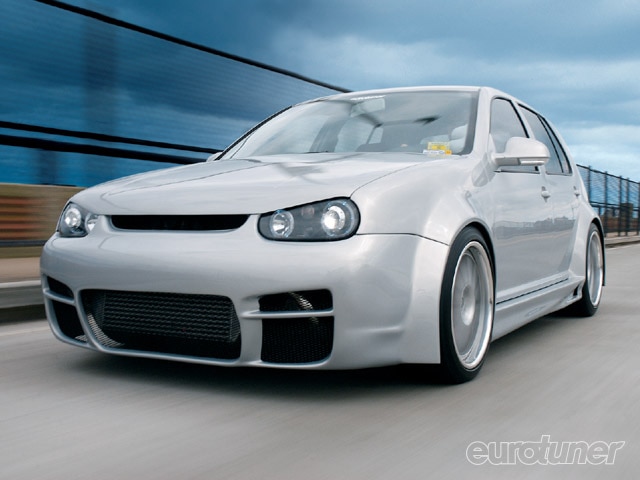 Back in the days of World War 2, the German U-boat submarine was a lethal machine, feared by any sailor unlucky enough to be caught in its periscope. Yet the standard Golf TDI, in the performance world, typically won't provoke the same response. That's because nobody fears it except for gas station owners, who survive on lumbering and inefficient SUVs. And much like a U-boat in the North Atlantic, a four-door Golf can probably slide past most people completely unnoticed.

Lloyd Fields, a government analyst from Sanford, North Carolina, is on a one-man mission to change the perception of the humble TDI, ensuring that nobody will miss his four-door oil-burner. And if you're unlucky enough to go against it at a stoplight, you'll know to fear it if you ever encounter it again. 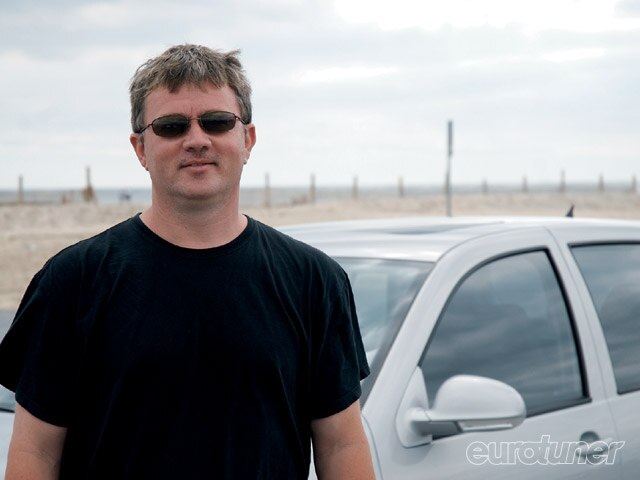 Like so many others, Lloyd started his quest without intending to turn a wrench except for basic servicing needs. Working in Washington DC at the time, he purchased this 2000 Reflex silver Golf TDI from a friend. "I bought the car because it was a Volkswagen and a TDI. I was looking for fuel economy and the convenience of a four-door. But then I was online one day and saw some of the things I could do with it and ever since then it's snowballed," Lloyd told us.

On his way to work each day he'd drive past Electrodyne in Alexandria, VA. So he stopped by, bought a body kit, and the rest is history.

The slow jog of modifications - a body kit here, a paint job there - turned into a full-on sprint in the summer of 2006. After being transferred to Huntsville, Alabama, Lloyd hooked up with car club H2O Tuning. "Once I moved to Huntsville and saw what I could do with the body kit I decided to see what else was possible." 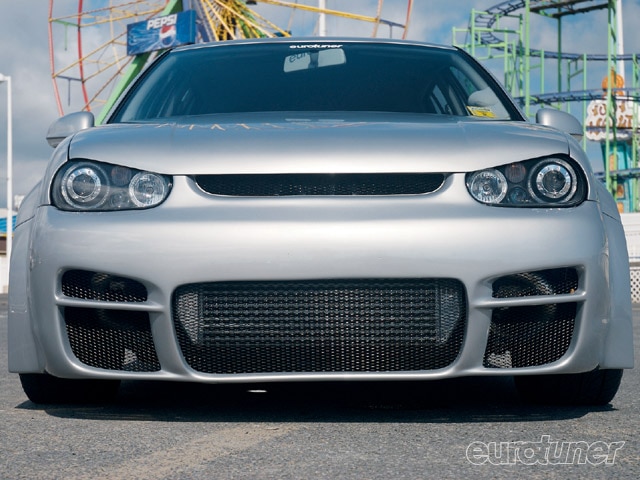 Lloyd was soon deployed overseas for work, and his cohorts at H2O Tuning, headed by club president Matt Bounes, transformed his car into the beast you see here. "I told them to do whatever they wanted with my car. I paid for it and they installed everything. They sent me daily emails so I could follow its progress," Lloyd enthused.

The Dubtechnik kit and humble hatchback were dropped off at Hugh's Paint & Body in Albertsville, AL, where the front bumper, wide arches, side skirts and rear valance were molded to the car. The side moldings were also smoothed, along with the rear VW badge, wiper, and anything else that could be jettisoned. 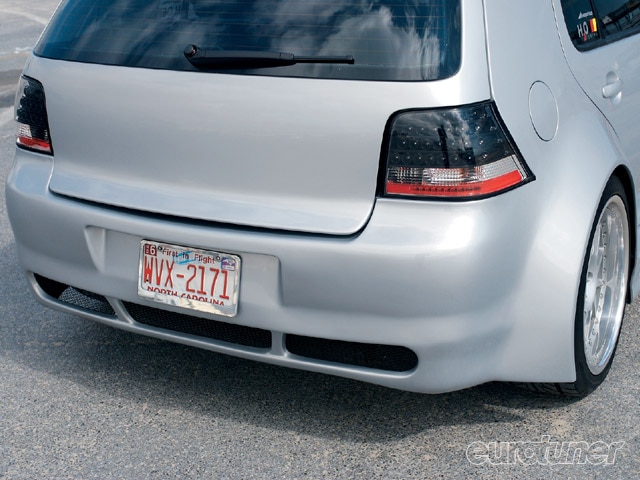 Then a TM Tuning hatch extension found itself molded to the rear, along with an R32 spoiler, while Mk5 mirrors were modified to fit the doors. A RaceOnUSA Bser Blick hood provided an aggressive attitude to match the rest of the body modifications.

Everything was then coated in a smooth silver-blue metallic paint, a shade just noticeably different from the stock color, especially as sunlight hits it at many different angles.

If you look close enough, Lloyd had the Eagle insignia seal from a German U-boat ghost-painted on the side of the car, just behind the front wheel on either side. After seeing the seal on an encryption device displayed in a museum, he added it as a final touch. "I'm still contemplating whether I like it or not," Lloyd said. "I might even take it off, I'm not sure. But I thought it made it a bit different."

Despite his uncertainty over the graphic, Lloyd is more than pleased with the results, "For some reason, certain people absolutely don't like the widebody, but I love the car. I'm 100% satisfied with how it looks."

Obviously, with the super-wide fenders and low fitting spoilers, wheel choice was crucial. So Lloyd didn't skimp on the inches either and went for HRE 448R forged wheels, which were procured direct from the company, measuring 18x9.5" front and a massive 18x10" rear, wrapped in 245/40 and 265/35 Nitto 555 tires, respectively. "I'm sure most people say this, but the wheels really set the car apart," he said.

Big wheels need big brakes, and with the planned motor modifications plus possible track days ahead, Lloyd went for some of the best. An ECS stage 3 brake kit landed up front, with massive Porsche 993 Turbo calipers, 12.7" discs and Hawk pads. The rear didn't escape either, and an ECS rear brake kit uses 337 GTI calipers and 12.1" two-piece rotors.

The same crew of guys from H2O Tuning also tackled upgrades to the Turbo Direct Injected diesel - a stage 4 RocketChip ECU upgrade was installed, along with an AEM intake, larger Bosch mass airflow meter and a KermaTDI Stealth 17 turbo, all of which serve to maximize airflow and increase the torque significantly.

To keep plenty of diesel fuel flowing, a set of PowerPlus 520 injectors replaced the stock units, while a TDI Racing boost controller holds the power in check when Lloyd wants to keep things low-key. A Eurojet FMIC kit helped fill the massive opening on the Dubtechnik bumper, and chill the incoming air more efficiently than the puny stock intercooler.

The stock transmission remains but is a serious weak link. It's a Tiptronic unit and can't handle the power, or more specifically, the immense torque his TDI is making. "It's amazing how much you can do with the 1.9 liter," Lloyd gushed. "Right now, I'm pushing 200hp, and it's all bolt-on."

Though he can run 30 pounds of boost all day long, he limits it to 22psi to save the transmission. "I'm wary about pushing it to the max with the automatic," he confided.

Such weakness won't be tolerated and since he's about to be deployed overseas again, another round of upgrades in the works. This time the car is heading to Black Forest Industries in nearby Cary, NC, and will be treated to a five-speed conversion, complete with a Peloquin limited-slip diff, upgraded axles and a taller fifth gear for maximum mpg.

Lloyd had an air ride suspension fitted before the photo shoot, but because of frequent problems, it's since been replaced with Koni coilovers. Eibach anti-roll bars are at both ends and an APR Motorsport carbon front strut brace keeps the uni-body tight.

All the suspension upgrades are soon to see a real workout, as Lloyd's been watching the TDI cup and getting a few ideas."Seeing those guys on the track is amazing," he said. "I've got a friend who's into Porsche racing at the Charlotte track and has convinced me to set up my car for track days."

While cruising to track days, Lloyd needed to be comfortable, so combined a number of OEM interior upgrades, such as European silver-faced dials and Passat W8 lighting conversion.

The only real let down for Lloyd is the European cluster, which hasn't been the easiest thing to integrate into the car. "It's a big pain in the butt," he griped. "I still haven't found anybody to convert the kilometers to mph... but it's on my list to do." (Should have got a cluster from the UK in mph - Ed)

An OEM VW nav unit was sourced from an overseas supplier, and a complete audio system was installed by Scott Newton of Radio Active in Sanford, NC. JL Audio speakers, subs and amp comprise the meat of the system, and provide a solid audio experience for the PS2 hidden in the dash.

Lloyd will be back from his deployment in time to attend the next Southern Worthersee - an upcoming show held by H2O Tuning and scheduled for the middle of May (see our events listing elsewhere).

"When I get back I'm gonna have something to look forward to... I can't wait," he said. "2009 is going to be a bad-ass show. I'm getting back in time, and it'll be my first time showing the car with the new tranny."

With everything that's been done, this TDI can no longer pass unnoticed. But just in case it could ever happen, an even bigger turbocharger is schedule. No doubt he'll be able to torpedo many unsuspecting victims on his way to the Southern W?rthersee event.

Thanks: H2OTuning for all the hard work

Read all about a custom supercharged 2000 Volkswagen Golf 2.0L, brought to you exclusively by the experts at Euro Tuner Magazine.

Read all about a custom 2000 Volkswagen Golf GTI 1.8T, brought to you exclusively by the experts at Euro Tuner Magazine.