A 10sec Mk2 Jetta Coupe With A Big-Turbo R32 Engine And Drivetrain From Canada. 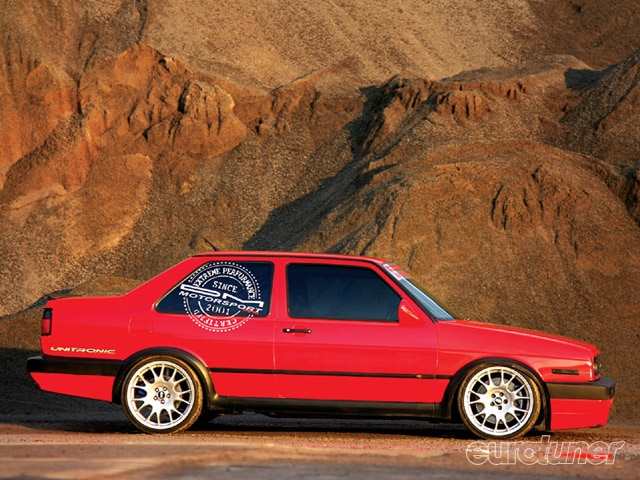 When "bench-racing" two vehicles over a quarter mile, every tenth of a second equates to roughly one car length. The red rocket that you see before you has eclipsed the quarter mile in just 10.7sec while spinning all four tires through third gear. And considering it recorded a Suzuki Hayabusa-humbling 147mph trap speed, this '90 Jetta should be deep into the 9s if it finds enough traction.

The E92 BMW M3 rips the quarter mile in just 12.7sec; while the 911 GT2 crosses the line in 11.8. So assuming that one-tenth of a second equates to roughly one car length, this Jetta will have 11 car lengths on the GT2 in just 1320 feet. That's about half a football field!

When asked how fast this Jetta really is, shop employee David Dumas laughed and replied, "It's incredible. I can't explain how fast it is. I mean, it spins all four tires on dry tarmac through third gear and it makes my 400whp VR6 turbo feel like a Toyota Echo." 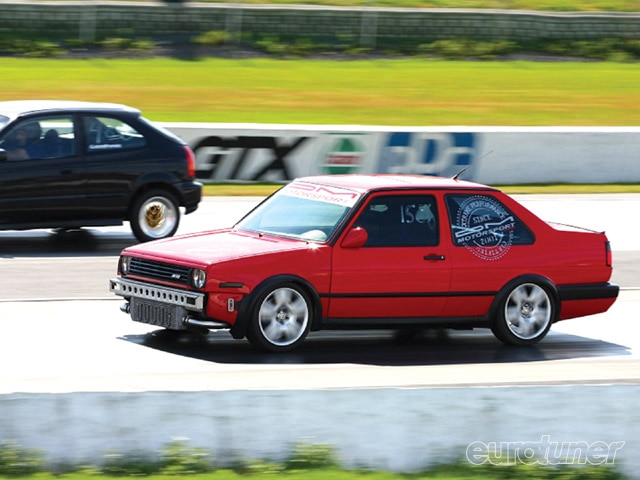 Before explaining the path this car has taken to reach its present state, let's get the rest of the hard numbers out of the way first. While the car has only seen 742hp to all four wheels on the dyno at 22psi on pump gas, that figure was attained on an aborted run. You see, the fuel pump maxed out, but with the fuel kinks worked out and the boost up to 28psi, the car hasn't visited the dyno again. However, it's now maxing out the 1000cc injectors, telling us more than 800hp at the wheels isn't out of the question.

And considering the turbo isn't even in its efficiency range until at least 30psi, we'd say the 1200cc injectors they'll soon be trying might net more than 1000awhp.

As you'd expect from a car that traps 150mph in the quarter, and belts out over 700whp, it's been an interesting trip to the top. Danny Bourgault, owner of DM Motorsport (DMM) in Quebec, Canada, was in the market for an old-skool Jetta when he happened upon this mint '90 Jetta Coupe. Like all projects, he bought it to "toy around with" and never imagined it would reach its current level of insanity. 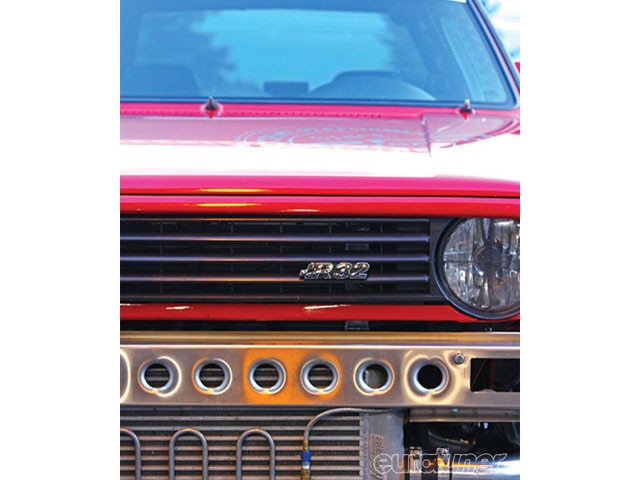 The car's rich history has seen many chassis upgrades. The first iteration saw it wearing a Mk3 VR6 drivetain and interior. The next phase gave it a Mk4 VR6 12v, followed by a 1.8T swap. The last swap was a 225hp Audi TT 1.8T motor and its AWD Haldex drivetrain.

"To make the Haldex fit, we had to use a combination of the older Syncro system as well as the Haldex electronics and hardware. The beam suspension was replaced by a custom independent rear with Peloquin LSD units on either end as well," Dumas said.

Shortly after, the 225hp motor was deemed inadequate, so DMM fabricated a custom turbo kit with a GT28R turbo and custom Unitronic software. When that wasn't enough, they stepped up to a GT30R and swapped in an Mk4 interior to match.

When the big-turbo 1.8T began giving Bourgault problems, he looked for more propulsion. And since there's no replacement for displacement, he found a wrecked Mk4 R32 online. "Since the R32 wasn't available in Canada, we had to buy a wrecked one from the US and ship it up," Dumas said.

Determined to see the job well done, Danny spent every free weekend swapping the electronics into the Mk2 Jetta from the headlights to the tail lights.

Along with the electrical gadgets came the R32 motor, trans, brakes and interior. When the last bolt was tightened and the engine fired it had working ABS, ESP, Climatronic and all the creature comforts you wouldn't expect in such a swap.

Since a turn-key R32 swap wasn't quite enough, the 3.2L block was filled with forged internals, a knife-edged crank and was then balanced 'n blueprinted.

As you might have guessed, the snowball continued rolling, and DMM built a one-off turbo kit around a ball-bearing Precision T76 turbo with custom 96mm turbine. The GT42-sized snail blows through custom 3" piping, into an HPA manifold and out through a custom 3" exhaust. When the car maxed out the 870cc injectors, Unitronic stepped up with a custom program for the 1000cc replacements that are currently maxed out as well...

Since earth-spinning power doesn't come without pitfalls, DMM eventually designed reinforced axles after breaking countless aftermarket units that were allegedly up to the task.

In keeping with their exploration of uncharted waters, the Jetta is currently receiving a custom clutch, since it eats through aftermarket stage 5 twin-disc units in less than 1000 miles. "We can't find a clutch strong enough. It ate five clutches last year -- each lasts through a dyno session and a couple of passes before they're toast," Dumas said.

Along with the Peloquin diffs, they also changed transmission ratios. While the current ratios aren't exactly suited to the drag strip, they've managed to withstand the high-boost launches at least. "The ratios are too tall for the strip. We finish the quarter mile in fourth gear, but redline in fifth is good for an honest 185mph, and we've still got sixth for more," Dumas said.

Along with countless custom pieces, this Jetta sports a one-off ten-point rollcage, as well as R32 brakes to keep things safe.

Since DM Motorsports wanted the car to be well-rounded, they outfitted the Coupe with Bilstein PSS9 coilovers, 18" BBS CH wheels and various upgraded suspension components.

As it sits, this is the most badass Mk2 Jetta we've ever seen. Who can argue with its timeless lines, optimum stance, circa 800hp and 9sec quarter mile capability?

While we were speechless at its current development, DMM is quick to mention they'll soon be tuning for more boost, adding bigger injectors and addressing the stock valvetrain. Stay tuned to see whether he can beat the Autoxtrem MK3 drag racer featured elsewhere in this issue!