Not Afraid To Be Noticed, We Check Out The Latest Widebody M3 From Studie Ag In Japan. 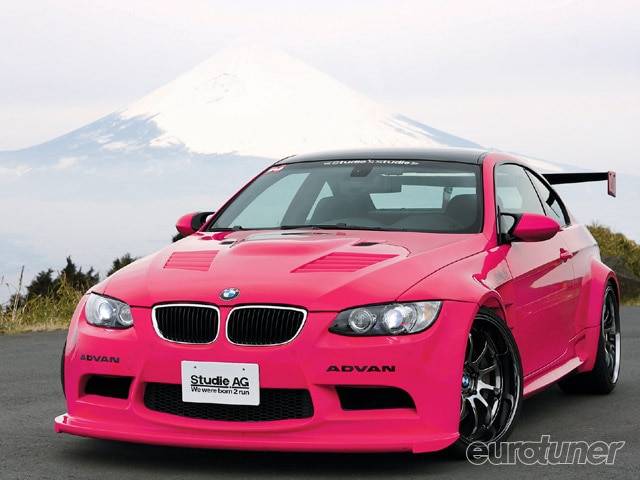 Afew months ago the internet forums and our inbox lit up with questions about an unusual pink BMW. Ordinarily, such a proposition would cause panic and vomiting, but it soon emerged that the E92 M3 in question was the work of our old friend, Yasuaki "Bob" Suzuki, the CEO of Studie AG.

Based in Yokohama City, Japan, the company has created a worldwide reputation with a series of colorful and superbly executed BMWs. In fact, regular readers probably recognize his work, since we've covered a number of his creations in the past.

The company first came to light when we had the chance to drive its bright blue BMW 130i hatchback at a Yokohama track day at the Tsukuba circuit in Japan (et 5/07). Behind the retina-jarring paint it wore a genuine BMW Motorsport carbon fiber widebody used by the official endurance racecars.

This was followed by a bright orange and bright green pair of BMW Z4 M Coupes (et 7/08). Both similarly wore dry carbon widebody conversions built by BMW Motorsport for its endurance racers, not usually available to tuners. 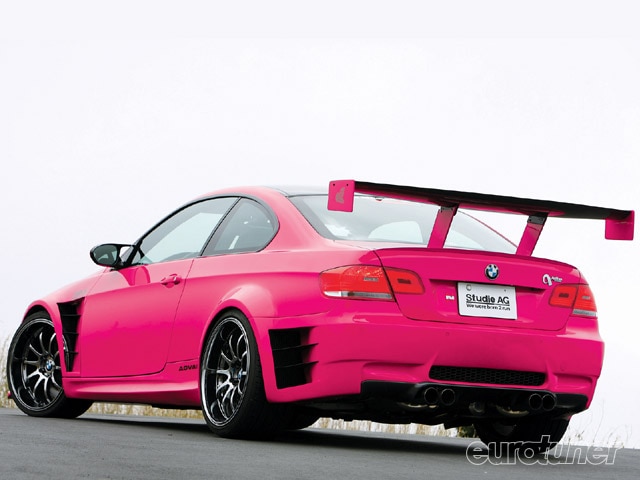 And let's not forget Studie's bright orange E93 335i Convertible (et 5/08). It had been converted to M3 spec ahead of the official M3 Convertible's arrival and created quite a stir, as you can imagine.

As soon as we saw photos from the 2009 Tokyo Auto Salon (featured elsewhere in this issue), we knew the pink M3 could only be the work of Studie AG. Its bright color and aggressive fenders had become the signature of Japan's leading BMW tuning specialist.

Don't imagine these are catwalk models, though. Studie builds all its cars to perform on the racetrack, and has an annual event at Fuji Speedway for its customers. Several hundred BMW owners turn up to drive on the circuit or take chauffered rides in Studie "taxis" - where all the project cars are put to work scaring customers on high-speed laps of the track. 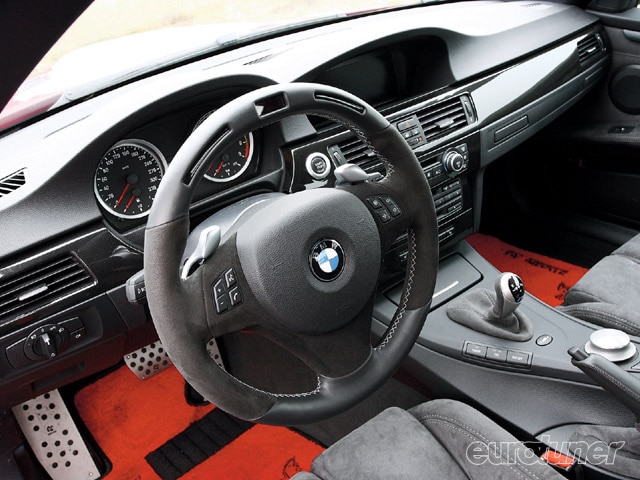 One of Yasuaki's greatest inspirations is the famous Nurbrgring and particularly the 24-hour race that takes place there. He frequently makes the trip to the German circuit and this was the inspiration for his widebody 130i and Z4s. Similarly, the E92 M3 you see here also owes its existence to the famous race.

The widebody kit is the same one used by the Black Falcon racing team in the 24-hour race and was sourced directly from Flomann Auto Design (Flossmann) in Germany. It's also a derivative of the parts used by the Rahal-Letterman M3 currently competing in the GT2 class of the ALMS series.

The body kit comprises a front spoiler with integral splitter, front fenders with rear vents, side skirts, rear fenders and a rear bumpers with more vents behind the rear wheels. The Flomann parts list includes several other items but Studie decided to source its own carbon rear diffuser from 3D Design. They also went to Varis for a custom vented hood and carbon rear wing.

Finally, everything was painted in-house using a custom mix based on Porsche's Rubystone red that was extensively "modified to be brighter," according to Yasuaki.

Filling those motorsport fenders wouldn't be easy, but Studie works closely with Yokohama tires and used its 20" RS-D wheels from the Advan range. Measuring 9" wide at the front and 10.5" rear, they were fitted with 245/30 and 275/30 Advan Sport tires, respectively. Although that's not much more rubber than stock, the wheels are wider so create a larger footprint, while the wider track inevitably produces greater stability and cornering prowess.

And since this car is destined for the track, Studie equipped it with a "home-made" Brembo race system. Rather than taking parts off the shelf, they used 380mm (15") two-piece Brembo front rotors, clamped by six-piston forged monobloc calipers from Brembo's race division - these were described by a Brembo specialist in the US as "very high-end, very exclusive and very hard to find." The rear has equally enormous 370mm (14.6") slotted rotors with similar race-spec four-piston calipers.

Additionally, Studie installed ball joints front and rear, as well as strut tower bars to reinforce the chassis in preparation for track days. They also added a Yamaha body damper, which is designed to push against any flex in the body and keep the shell rigid.

Under the hood, the tuner has always been rather conservative, preferring to enhance BMW's engineering rather than transform it. In this instance, they teamed up with Active Autowerke in Miami to fit its stainless steel Signature exhaust system that claims to offer an extraordinary sound with noise canceling technology to eliminate drone. Active also supplied its billet Signature pulley system as well as performance software for the ECU. Both the exhaust and software are said to add an extra 15whp each to the 414hp 4.0 M3 V8. When used in unison, a figure of 35whp is quoted by the Florida tuner.

To create the complete package, Studie AG worked its magic inside the car. The first thing you notice is the pair of Recaro TS-WS seats up front. These Japanese-market racing buckets have no adjustment for the carbon fiber backrests, fixing the driver in the ideal position. They were trimmed in grey alcantara, along with the rear seats, door cards, armrest and both boots.

The team also fitted 3D Design pedals and a footrest, but the real star is the BMW Performance steering wheel with its shift lights, g-meter, oil temp and lap timer. You can read how to install this wheel elsewhere in the issue.

After marveling at his pink creation, we tried to extract from Yasuaki what his next project would be. He remained tight-lipped, promising only that it would surprise us once again. So whatever he has planned, you can bet it'll grab everybody's attention.