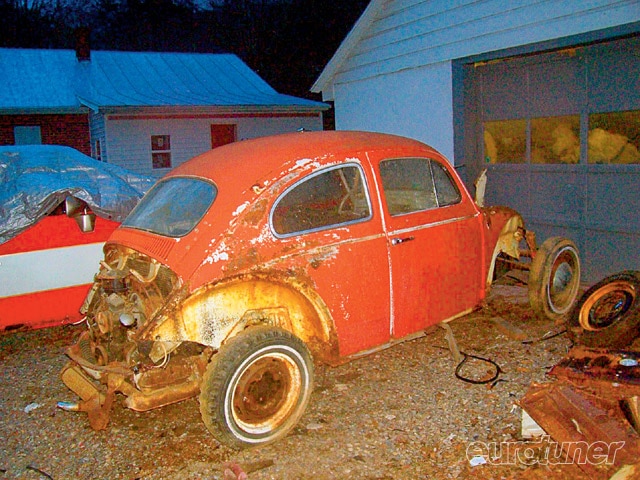 Drag 1
Did you make the 3/09 issue just for li'l ol' me? I think you did. You shouldn't have, but I'm glad you did. An issue with Mk1s and Mk3s as well as VWs drag racing - short of putting me on the cover in a thong and pasties - could be no better. If you also would like to include more photos like the sunglasses girl on p84, please feel free to do so as often as you'd like. Just try to refrain from the usual over-tanned bleached blondes. I think Paris Hilton has taught us that peroxide and fake tanning products used together kill brain cells.

Anyway, I've sent some photos of our latest project. I previously sent some of my VW rod but I haven't worked on it for a while. Instead, I got involved in my brother's project. It was to be a four-week project, but we've passed that deadline, so it's become a six-week project. I just wanted to show you that if you fear no rust, any $100 car is fair game. It will eventually be sold and the money will finish his '84 four-door bagged Dually.

I've also included a shot of the "doo-doo box library". I'd like to see if other readers have a larger "personal library". Maybe I'm the only freak but it's the best place to read as long as you don't get paper cuts. I've even got some VW manuals in there for longer sessions.
Rhudy Williams
Email 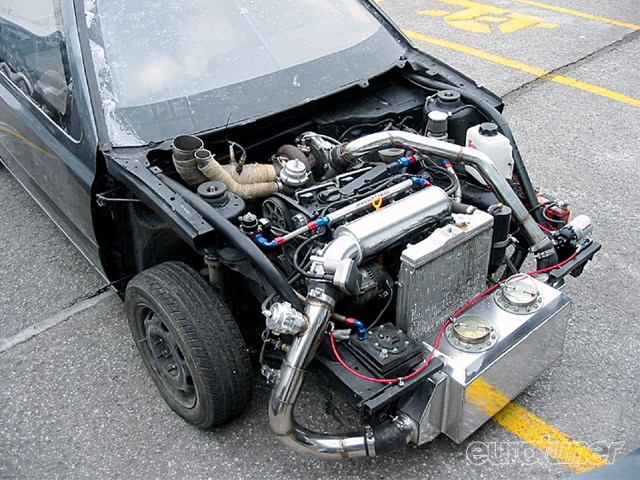 Drag 2
It was good to see your coverage of the Show & Go drag racing (et 3/09). We've worked our butts off in the last five months and the car has a new look with loads of new parts. We dynoed it yesterday and saw 715whp, 528 lb-ft which makes it the most powerful 1.8T on gasoline and the stock Bosch ME7.5 ECU. So we'll see how it does at the Spring Show & Go, and thanks again for the coverage, everybody is very happy. I'm sure the sales went up becuase it took me forever to find copies around here because they were all sold out.
Marc Hubert
Canada

We'll have coverage of the Spring Show & Go drag racing in the 8/09 issue.

ETGP
In reference to the writer of "etGP3" on the 3/09 letters page, did he even read the GP article to discover why the Ford Focus was included?

Don't get me wrong, I'm not a big fan of domestic cars, but after living in Germany for two years in the Army, I came to realize that US cars in Europe are not "American" at all. They might be made by a US manufacturer, but most of them have a Euro-feel unlike anything made in America. So as long as its Euro or has Euro roots, keep 'em coming! 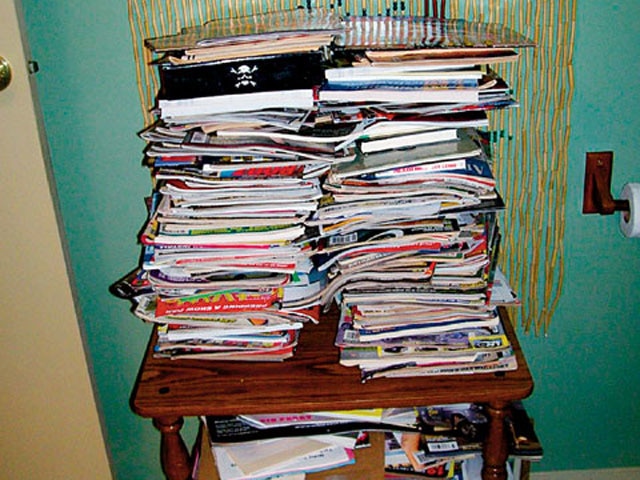 On another note, could you please stop featuring cars like the BMW 135i. I'm starting to fall in love with it and may have to look into getting one. And my Dubber friends may not like that. Although I guess that contradicts my first statement. Oh well...
Dave Bahrns
Baqubah, Iraq

CC-D
Thanks for a great mag. I've been subscribing for years and look forward to my monthly fix. I'm writing in regards to comments in your 4/09 issue made by Justin Mann on the Letters page. It's apparent he's lacking sufficient historical knowledge about VW and its challenging entrance into the luxury car market. Otherwise, he wouldn't have accused VW of "copying" MB's CLS. As a veteran 18-year Dub owner, I've followed VW's water-cooled design and business strategies. So it's important to note that in 1999, VW introduced the Concept D, which laid the foundation for the Phaeton (Concept D1) and today's CC. The Concept D boasted an incredible 5.0 V10 direct-injection diesel, 313hp, 553 lb-ft at 2000rpm; or a 6.0 W12 petrol with 450hp. While MB's innovative engineering has led to many of the safety features found in today's cars, the company can't be fully credited with the shape of the CLS. In fact, I'd say MB was inspired by (copied) the Concept D design. And given that they were already well positioned in the luxury car market, consumers wouldn't question its MSRP.

Unfortunately, the VW brand wasn't associated with luxury vehicles, and the "volks" weren't prepared to pay $75000 for a VW, regardless of the technical advances the car may have offered. Nevertheless, not all was lost. It's apparent that the R&D performed on the concept was considered in the design of other VW and Audi vehicles.

So I think it's fair to say VW didn't copy "whatever is out there"; instead, it remained true to its innovative traditions and continued to inspire other manufacturers.

Thanks for a great publication. I look forward to having one of my Dubs grace its cover one day.
Jose Melendez
Long Branch, NJ

Diversity 1
To all the people who whine about their favorite cars not being featured in the magazine (et 3/09), please feel free to drink a big mug of "shut the F up" and realize it's not all about you. I think the mag is going in a good direction, with diverse cars and better tech articles.

This isn't a VW-only magazine. So to all you whiners, go cry some place. Buy a Mustang and read 5.0 or some other one brand-only 'zine. That's my opinion.
David Malesky
Coopersburg, PA

Letter of the Month
Sock Mystery
I've been enjoying your magazine for years and would like to have an article in one of your issues one day. I have a pretty interesting story you can write about...

To begin, I have an E46 M3 in Alpine white with lots of tasteful mods including BBS rims, supercharger, GTR carbon hood, CSL carbon trunk, etc.

A friend and I installed the supercharger and finally had it running after countless errors in tuning and fixing EML and check engine lights, etc. We couldn't find an intake filter but were very anxious to drive the car, so we decided to temporarily clamp a sock (yes, a sock) to the piping.

After the first test run, we popped the hood and realized the sock was no longer in place. But we figured it fell off on the street, so at 2am we went up and down the street looking for the sock. Little did we know the sock had been sucked in and had bent the blades on the 'charger.

For about a month, the car hadn't been boosting. We tried many things to rectify it but never understood the problem until we took it to local BMW tuning shop, RMS. Even they had difficulty identifying the problem until eventually, Osh, the owner of RMS said, "it's as if there's a cloth stuck in the system somewhere." And that's when I mentioned, "oh wait... there might be a sock in there!"

So now we'll replace the Rotrex blower with an ASA, steam-clean the kit and see what happens. Hopefully, it will be over the 400whp!
Armand Wassilian
Los Angeles, CA

Congratulations to Armand for being selected as our Letter of the Month with his cautionary tale... As LOTM, we're sending him a T-shirt from Dub Korps. Check out the website at www.dubkorps.com and choose any of the ultra-cool designs, which include plenty of retro-style VAG-themed goodness.