Don't Let The Sunflower Paint Fool You; This VW GTI Is An Undercover Killer Bee With A Budget-Built 2.0 Turbo. 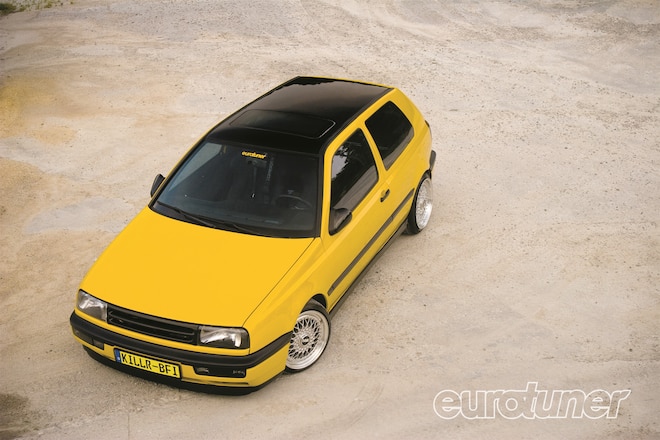 1998 VW Golf GTI
The warmth of the '98 Volkswagen GTI 2.0 seen here is like a serene mid-summer's afternoon. The fresh Ginster yellow paint looks alluring across the perfectly sculpted Mk3 body with its shaved accents and Jetta front-end. Matched with timeless BBS RS wheels, this GTI is as easy to admire as an Ansel Adams photograph. 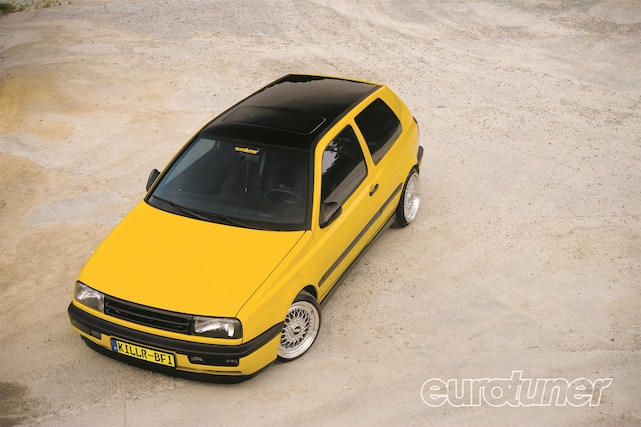 Pop the hood and you'll find this two.slow isn't so innocent after all. The black and yellow engine bay houses a hybrid turbo setup that produces over 300hp, nearly triple the stock output. Combined with the lightweight chassis, motorsport-themed interior and balanced chassis, this cute yellow two-door can leave you black and blue, especially if you think your chipped Mk5 or modified BMW 330i can outshine it on the street or track.

The masterminds behind the Killer Bee GTI are Joe Flaherty, Daniel Coop, Adam Ligon and Paul Carr. They're the four musketeers at Black Forest Industries (BFI) in Cary, NC. Founded in '01, the tuner originally focused on BMW platforms, but has since shifted its attention to the VW/Audi market, mixing in a little Porsche as well. Developing its reputation, BFI continues to manufacture and offer parts such as bushings, mounts and wheel spacers.

But the achievements of this bumble-bee are hard to ignore. It's been the company's baby for a couple of years, yet took the team only 40 days to finally complete.

Perhaps, the beauty behind the BFI bee isn't its charm or impressive power output, but the overall budget and long-term reliability. The plan was to incorporate aftermarket parts that would perform well above the car's factory potential. However, they wanted to do it without jeopardizing the vehicle's daily drivability and their credit balance as well.

"We put as many of our own off-the-shelf parts as we could on this car. It was a build designed for somebody with a reasonable budget - an everyman's project," Joe Flaherty explained. "The car gets attention but it isn't that expensive. Even if you earn a small salary, you could build this car."

According to Black Forest, a person who can wrench could recreate something similar for around $10k. And that even includes the price of the car!

BFI started the project with the engine. Not having the displacement of the VR6, the four-cylinder 8v produced a mind-numbing 115hp and 135 lb-ft of torque from the factory. And with over 100k miles on the odometer, you can bet it wasn't running as efficiently either. So the guys at BFI devised a game plan to maximize the motor without spending too much out of pocket.

"Somebody isn't going to spend money on machine work, rods and pistons as part of a budget build. So we tested the limits of the stock motor," Joe said.

Using the stock bottom end, BFI fitted a C2 Motorsport head spacer and ARP head studs to prepare for boost. An affordable forced-induction kit came from Kinetic Motorsport. But instead of using the regular turbo, a T3/T4 50-trim turbo was fitted because it has a larger compressor housing. Also included was a 38mm TiAL wastegate, GReddy blow-off valve, exhaust manifold and 2.5'' downpipe. Uprated Bosch 440cc injectors and a larger fuel pump would feed the thirstier motor, while exhaust flow was improved with a 2.5'' stainless Jetex system and 42 Draft Designs test pipe.

The hybrid setup was enhanced with an air-to-water intercooler designed by BFI. While it keeps intake temperatures cool, a modified USRT short-runner intake manifold decreases the distance the air travels to the cylinders, thus improving the power at the top-end. BFI had to modify the manifold to reposition the throttle body in the optimal location.

Not done with the motor, a G60 cam was sourced. Coordinated with a Eurospec adjustable cam gear, this improved throttle response and helped build boost quicker.

With its extra power, the engine would run hotter so BFI installed a Mocal oil cooler and thermostat plate, along with a 3'' radiator to address any issues. BFI's oil catch-can would also guarantee excess oil wouldn't be trapped in the boost pipes. BFI's motor and tranny mounts were another fine touch. And for better weight distribution, the battery was relocated to the trunk.

C2 custom-tuned the software to achieve the best fuel map without over-working the turbo or motor. When all was said and done, BFI strapped the car on the dyno and measured 266whp and 284 lb-ft.

Since the engine was built on a budget, so was the drivetrain. There wouldn't be a six-speed swap or LSD, but BFI updated enough to ensure traction. The five-speed manual was disassembled and fitted with BFI's stage 3 clutch kit and flywheel; the extra clamping force eliminating clutch slip. Paired with a USRT smart shift kit and Peloquin 80% shim kit to remove torque steer and wheelspin, the balance of the GTI was almost perfect.

Suspension tuning followed the same theme, with BFI replacing the control arms and bushings with its own replacements to ensure the handling could withstand aggressive behavior. After trying Spax springs, BFI updated to coilovers that allowed both ride height and damping adjustment.

The most surprising element of the car was the braking. The 11.3'' front and 11'' rear Eurospec rotors brought the Mk3 to a stop without any effort, reinforcing the car's stability. BFI's stainless lines increased the sensitivity of the pedal feel.

Next on the Killer Bee hit-list came the exterior, where a European OEM sensation is felt throughout, starting with a Jetta front-end, European bumpers, duckbill spoiler, E-code headlights and textured moldings.

A few subtle elements can also be found if you have a good eye, such as the deleted washer jets, shaved antenna, rear wiper and emblem, BFI's badgeless grille and DTM-style mirrors. When the car finally came together, Performance Autobody took care of painting the car with a fresh coat of Ginster yellow, while the roof was painted gloss black.

Wheels would be the GTI's X-factor, so BFI ditched the four-lug bolt pattern in favor of a VR6 five-lug conversion. This opened up a world of wheel options. And after testing a set of black HRE wheels, one of BFI found a set of BBS RS wheels on eBay.

You might wonder how BFI was able to fit Acura wheels on the car. The solution was to manufacture wheel adapters to accommodate the Japanese bolt pattern.

Finally, the interior has a functional, motorsport-inspired look. The first thing you'll notice is the Momo Champion steering wheel, upholstered in leather and suede. Next, a pair of suede-upholstered Corbeau seats take the spotlight. Obviously, BFI couldn't get enough of the furry fabric, so the headliner was done in suede to match.

With all the dark suede, BFI had the pillars dyed black to avoid contrast. The steering column features a 42 Draft Design gauge pod to let the driver monitor boost, while a custom gauge panel in the center console displays EGT, oil temp and oil pressure.

With the GTI built strictly for performance and shows, rear seats wouldn't be needed so they were ditched in favor of an FK roll-bar and a sound system built into the false floor.

This Mk3 GTI 2.0 has the total package - undeniable good looks, turbo power and daily drivability. Nothing was overlooked in its build, yet it's amazing to consider that any enthusiast could build a similar car on a reasonable budget. It just takes hard work, the right formula and patience.

Put this VW next to 99% of the cars on the road with a comparable budget and Killer Bee takes the win. Or is it honey?