Introducing One Of California's Hottest Mk5 Gti's Created By Derick "The Real" Mccoy. 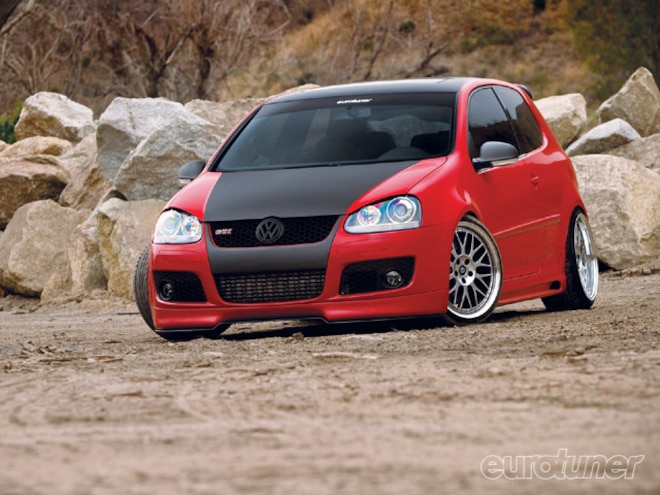 For the past few years, the cool kids in the VW scene have been preaching shaved bodywork, flat colors and air suspension. But forget that notion for the next five minutes because Derick McCoy's '08 GTI embodies a proven style that looks stunning time after time. 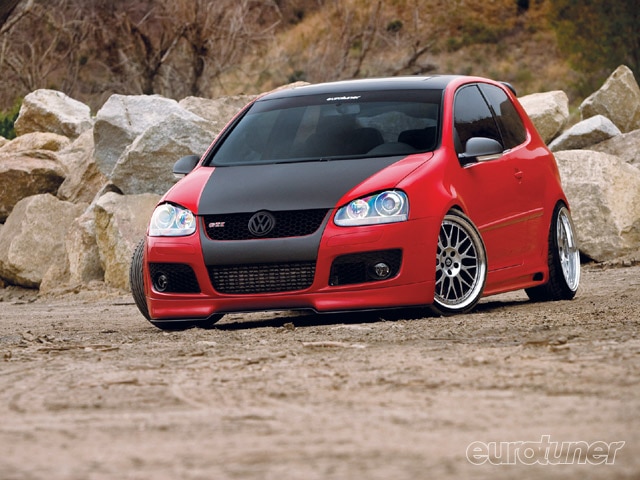 The overall package is eye-catching, gaining respect from not just European car enthusiasts but thumbs up from the domestic and import guys, too. Derick's Volkswagen is an all-round show-stopper with a daily driving personality. We can't help but admire its simplicity.

Now why would we call this Mk5 GTI simple? Because the recipe uses a handful of ingredients - classic rims, big brakes, matching body kit, carbon accents, et voila! Anything else would make the car too flashy for the road and too heavy on the pocketbook.

Sitting down with Derick, we quickly learned how down-to-earth he is. Currently residing in Santa Clarita, CA, Mr McCoy works as a retail manager during the day. Outside work, he spends lots of time with family and friends. How about his hobby? You guessed it; he's an old-school VW enthusiast since before his foot could reach the gas pedal.

His first car was a '74 Bug. Apparently, owning an air-cooled wasn't life's most enjoyable pleasure, since it deteriorated with each day that passed. "Typical Volkswagen," Derick laughed.

After that, he graduated to water-cooled platforms with a Mk2 GTI, Corrado, Mk5 Jetta and B6 Audi A4. However, he must have had a brain fart when he left the Euro family for a Toyota truck a few years ago!

"I never owned a truck before and I liked the way the Toyota looked. But after owning and even modifying it, it was still a truck."

Eager to get back into a Dub, Derick wasn't convinced when the Mk5 GTI hit US dealers in '06. But after tuners and enthusiasts got to work, Derick saw its potential and knew the GTI was his perfect match.

He drove home his Tornado red GTI in late '07 and already knew what he wanted to change. From the wheels, body kit and suspension, it was all crystal-clear. Talk about a guy who knows what he wants...

To begin, he enlisted the help of a few good companies and friends. Supreme Power Parts sourced almost all the parts. All the carbon is from ZMax Autosport. And, good friend Lou Kourounian, was responsible for all the installation at his VW repair shop.

Wheels ultimately make or break a car, so that's where Derick jumped in. "My first wheels were BBS LM replicas. I think it's the best looking wheel out there, but I wasn't a big fan of reps. I then found some photos of the AutoArt wheels online and liked them," he admitted.

The AutoArt wheels were similar to the LM but with a step lip. AutoArt also offered custom offsets, so Derick could configure the amount of poke and lip he wanted.

The conservative body had to be changed next. Yet Derick wasn't going to spend all his pennies shaving the car or going widebody. A straightforward add-on kit would be sufficient. "I've kitted every single car with the exception of the air-cooled," he told us. "There weren't a whole lot of kits made for the Mk5 GTI but I liked the Rieger best."

Ordered directly from North American Motorsport, the front and sides gave the car a speed-hungry look. For the rear, Derick stayed OE, opting for a R32 valance. But that brought a new predicament with the R32's center-exhaust cutout. Luckly, Eurojet Racing makes a turbo-back exhaust with downpipe intended for this bumper conversion, so everything came together seamlessly.

At this point, the exterior was wheels and a body kit. It looked decent but needed some attitude. So Derick entered the world of carbon fiber. "I've never been crazy about carbon, but I met Kelvin at ZMax Autosport and he had some matte carbon from Osir Design on his VW. I didn't even have my GTI at the time but knew that was what I wanted." Carbon brought the exterior to life with the grille, mirrors, rear wing and diffuser. For the hood, Derick had the sides color-matched to flow better. The roof was then painted matte black to resemble the carbon.

The chassis was upgraded with the basics, more for looks than anything. KW Variant 2 coilovers provided the slammed stance, while camber plates on all four corners allowed the wheels to tuck more and reduce the rubbing.

Sitting behind the front wheels were a set of Brembo big brakes. The 355mm drilled rotors with four-piston calipers look outstanding but unfortunately Brembo didn't have a matching rear kit. So Derick drilled a pair of stock rotors to resemble the pattern.

The interior remained dignified with an Osir gauge holder and shift knob. However, release the rear hatch and gaze at the color-matched sound system!

Pioneer head unit with Osir shift knob and gauges are a nice touch "I had my good friend at Pacific Stereo in Woodland Hills do systems in the past in my Audi and truck. He had a vision in painted fiberglass and I had three amps I wanted to use but there wasn't a huge amount of trunk space." Although diverting from the original plan, the extravagant trunk display showcased a single JL Audio W10 sub with the three amps surrounding it.

Sound quality in the cabin was provided by three-way Dynaudio components up front, while Focal two-ways hit the rear. With extra juice pumping the music, a second battery was required and mounted under the system in the trunk.

You might think Derick's car was all show, but rest assured he didn't leave the 2.0T untouched. "The stock engine was pretty fast but after the Eurojet Racing exhaust and front-mount, Carbonio intake and APR software, it was a night and day difference."

The combination of parts should easily grant an extra 50hp, not to mention the improved throttle response and rush of boost. "At some point, I might upgrade to a big turbo but right now I'm content with the power."

So there you have it - one of California's most tastefully modified Mk5 GTIs. Derick's owned the car 18 months and future plans include driving it since the car only turned 7k miles after our photo-shoot! So if you're cruising SoCal and happen to see Derick, show this Real McCoy some love.