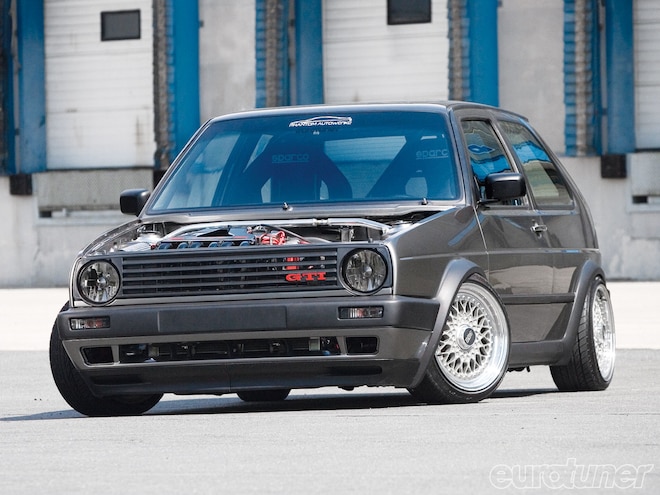 Walking through the vendor row at Waterfest 15, it's easy to start seeing things with a jaded eye. Many of the cars follow similar trends and soon everything can begin to look the same. That was until we came across Phantom Autowerke's booth. All we could do was stop and stare. 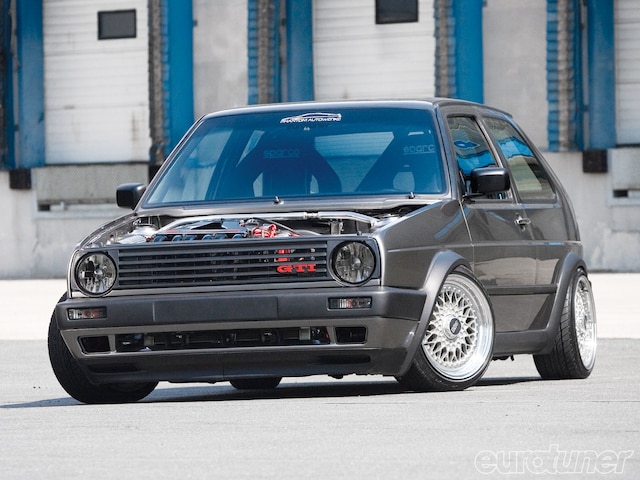 Co-owners of Phantom, Anthony Foster and Chris Carrea, along with lead tech Loucio Davella debuted their bread 'n butter project - this '91 VW GTI. This Mk2 stopped everybody in their tracks with its glorious engine bay and hardcore old-school flavor. To our surprise, the friends-turned-business partners only started Phantom in April '09, just three months before the show.

"We're a startup shop from Westchester County, NY," Anthony stated. "We have a background in autobody and mechanics. So we'll do anything from a full-blown restoration or show car, all the way down to regular maintenance."

"We acquired the car as a running GTI 8v without a sunroof. So we stripped it down and sandblasted it inside and out to repair the rust. In fact, the engine bay has about 175 man hours in it." And after seeing the bay, you can immediately appreciate the time and craftsmanship that went into it.

Phantom began by fabricating plates to cover the chassis rails. Every hole was then welded over and smoothed. The shock towers were also tidied up.

Phantom continued by deleting as much as possible to give the bay its heavenly form. The coolant bottle was thrown out, along with the rain tray, air conditioner, EGR and air pump. The ECU was relocated under the passenger's airbag panel on the Mk3 dash, where it's hooked up to an actuator so the team can easily reach it. Then the alternator was relocated to where the A/C used to be.

Good luck finding any loose wires because everything was run through the rails. "Every wire was cut or extended to reach the ECU and is the perfect length to reach wherever its components are," Anthony explained.

Photo 4/15   |   Smooth as butter, this shaved bay has it all with 3.0 liter VR6, modified Schrick intake manifold, custom airbrushing and more

For improved airflow, Schrick 268° cams opened the top-end, while a modified Schrick intake manifold improved the powerband. The cylinder head was port and polished before bigger valves and throttle body were added to the mix.

For the tranny, a Corrado five-speed was fitted with a Centerforce clutch, Autotech lightweight flywheel and Quaife limited-slip.

Before mounting the rejuvenated motor and tranny into the chassis, Phantom had some show-stopping touches, which included painting the intake manifold, brake booster, alternator and subframe, as well as the trans, head and block. The attention to detail can even be seen in the bolts, where everything was changed to polished steel.

The intake manifold and valve cover also showcase custom airbrushing, which Phantom executed in-house. "We just tried to do something different. Bring it back to the old school," explained Anthony.

The all-motor VR6 is estimated to put down 235whp and is arguably the most extravagant element of the car, but the exterior is equally outlandish. As previously mentioned, rust had damaged the body and there was some rear-end damage that couldn't be fixed. So the team took several months to lock down brand new bumpers, fenders, doors, hatch and moldings.

"The overall look we were going for was to make the body look as retro as possible, almost like a Mk1, and totally OEM." So they started by deleting the swage line in the rear quarter panel to mimic the Mk1 Rabbit. The rear seams were also smoothed and welded. Furthermore, they deleted the rear wiper and front banana lights, then added the sweet Porsche 944 Turbo handles, which Phantom admitted were a pain in the ass to find.

Once the body and bay were done, it was time for color. Phantom specified a combination of House of Kolor paints and mixed it themselves to create a unique shade of graphite. "We didn't want it to stand out too much; keep it simple but have people know it was custom," Anthony said.

Chassis upgrades followed, and as you'd suspect, almost everything is new. This included fresh A-arms with Audi TT bushings, set of B&G coilovers plus sway bars and polished front upper, lower and rear stress bars from Autotech. And if you ever take a look under the car, you'll see the underbody was coated in rust prevention material and Rhino Liner.

The brakes were upgraded to VR6 spec with Brembo rotors, while the wheels were sourced from a German exporter. The refurbished 16x8" BBS RS had an Audi bolt pattern, but once the Falken tires were mounted, H&R adapters made them fit.

The interior is the least retro part of the makeover, with an assortment of Sparco parts such as the race seats, steering wheel and pedals. There's also the Mk3 dash with tilt column to update the cockpit. The upholstery is inviting as well, with grey suede and black leather all around.

Behind the seats, an Auto Power four-point roll-bar was color-matched and a stereo system recessed into the false floor. It started with approximately 100sqft of Dynomat being laid down to improve the overall vibration and reduce sound quality. Then the rear panels were molded in fiberglass and covered in black leather. Finally, Pioneer equipment was installed, including the shallow 12" ib-Flat sub in the spare tire well.

From top to bottom, this amazing Mk2 VR6 is 99% complete, although Anthony and Chris admit to a few odds and ends that need finishing. The car is a work of art and a great beginning for Phantom Autowerke thanks to this trio of friends.