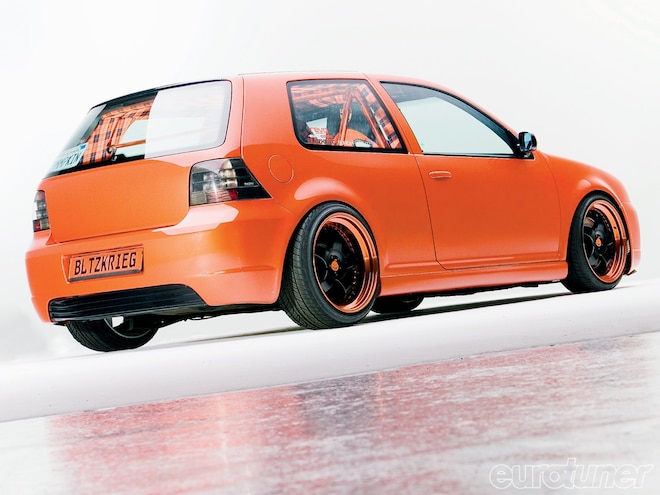 Apologizing for his late arrival at our photo studio, Juan "Pumpkin" Vega explained how the police had stopped him en route. Driving a vehicle like his '00 VW GTI inevitably attracts the attention of law enforcement, but fortunately this one seemed more curious than vindictive. In fact, after overlooking numerous mods, Juan escaped with just some lost time. 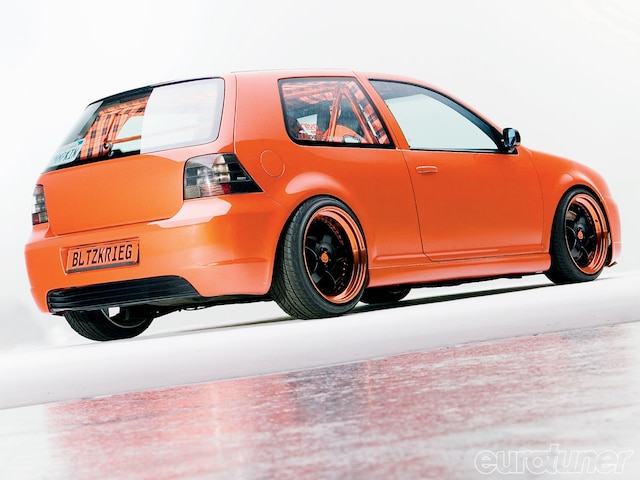 Undoubtedly, there's something arresting about this GTI and inevitably the color is a big factor. "I never imagined I'd own an orange car," Juan confessed. "I'd been looking for a GTI and this one looked red in the photos. But it was a good price and local, so I bought it anyway."

Prior to the GTI, the 24 year-old from Inglewood, CA owned a Mk3 Jetta 2.slow that got the regular bolt-ons, but its unwillingness to relinquish more power persuaded him to replace it.

Complete with Bistein PSS9 coilovers and RS4 replica wheels, the Mk4 was a breath of fresh air. In fact, he didn't immediately start work on the GTI but grew fond of it, nicknaming himself and the car "Pumpkin".

When he did get the urge for additional modifications, it was all about power. "I just wanted it to go fast," Juan laughed. "I didn't care how it looked and never used to wash it. I was just about speed."

With its newfound performance, Pumpkin became a regular among Southern California's canyon carvers, making full use of everything under his right foot. But it ended in tears 30,000 miles later when something broke on his intake, which was ingested by the turbo, damaging the turbine.

Like all good tuners, Juan turned adversity into opportunity and had Eurocode build his motor. Addressing the bottom end, they bored the block to accept 82mm JE pistons on stronger Integrated Engineering rods, creating 2.0 liter capacity. The head was also rejuvenated with Ferrea valves, springs and titanium retainers, allowing the motor to spin to 8500rpm.

A larger GT3076R turbo with a V-band kit from Pag Parts was installed along with a Eurojet Race intercooler, for which David Sarabi at Eurocode fabricated custom piping. They also fitted a 2.5" Eurojet exhaust with turn-down tips, as well as an ITG filter on the ATP intake pipe.

With everything bolted down, the 20v motor delivered a healthy 380whp on 91-octane fuel, but Eurocode is hoping for even more once it gets new software to exploit the higher rev limit.

During the course of the engine mods, Juan became tired of looking at his neglected exterior and took a sander to the rear quarter, forcing himself to address it. He also ripped off the side moldings, rear wiper and antenna with the same intentions.

At this time, a friend donated a cracked R32 front bumper, which Juan was able to repair. He also removed its coachline, smoothing the bumper in the process. He then removed the badge notch from the bumper and hood, replacing the grille with a badgeless JOM part. A Seat Cupra splitter was also added to the front end as a finishing touch.

Along the flanks, 20th Anniversary Edition side skirts were fitted, as well as stubby European mirrors. He also shaved the repeaters from the fenders and the reflectors from the bumper, so added in.pro door handles with LED indicator bulbs, but being orange they're not easily seen.

At the rear, an R Line bumper was fitted, although the diffuser part subsequently melted after a two-hour tuning session. He also added Hella Magic Colours tail lights as the black 'n orange theme started to evolve.

Having done most of the preparation himself, the car was eventually delivered to M1 Autobody for paint, where it was sprayed in its original Tropic orange, with gloss black on the roof, mirrors, grille and rear valance.

To this end, a set of Tracer Tech 1 wheels was powdercoated black. Measuring 18x9" front and 10" wide on the rear, they had orange bolts but something wasn't quite right. So Juan investigated different finishes before deciding to have the wheel lips stripped, polished and given an orange clearcoat. With their pumpkin center caps, the wheels are the perfect compliment to the paintwork, although Juan admitted they were susceptible to stone chips.

The same technique was used on the Weichers roll-bar in the rear of the cabin, which was also polished and clearcoated orange. "I'd removed the rear seat years ago because I don't take passengers," he told us. Looking for something to fill the space, the roll-bar fitted the emerging motorsport theme nicely.

The interior was originally beige, but that would never work. So black cupholders, glovebox, door panels and carpet were sourced from an R32. He then added Eurojet seats with Schroth harnesses.

What the interior needed now was a splash of orange, so Juan spent three hours scouring the Fabric District of Downtown Los Angeles before discovering the perfect orange 'n black plaid cloth. This was given to a local shop, which covered the headliner, pillars, door cards and e-brake boot in the fabric, creating a wonderful Halloween environment for the owner, who coincidentally celebrates his birthday in October.

In keeping with his original performance aspirations, the GTI is devoid of stereo equipment, with the exception of a JVC head unit that plays through the stock speakers. "I didn't want the extra weight," he told us. "And although I don't track the car, I do enjoy the canyons, switching to 17x7.5" Enkei RPF1 wheels with 245/45 Falken RT-615 tires when we go out."

Both sets of wheels precluded the use of his preferred R32 front brakes, so he swapped back to 12.3" 20AE front rotors and painted the four calipers orange. However, this could again change if Pumpkin follows through with his plans to overhaul the car again: "I'm tired of the stretch 'n poke look, and of cleaning these wheels," he admitted. "I want to do it differently, possibly with lightweight, one-piece wheels; then add a carbon fiber roof, hatch and hood. But I'll paint them, and change the rear bumper. I want to go for a motorsport look but it took me two years to create the current style, so nothing's going to happen overnight," he laughed.

Frankly, it's unusual to find a car this well presented that's dedicated to performance driving. Usually they become show queens and never turn a wheel in anger again. However, Juan's determined to continue enjoying his Tropic terror for a few more years while attending shows around the SoCal area.