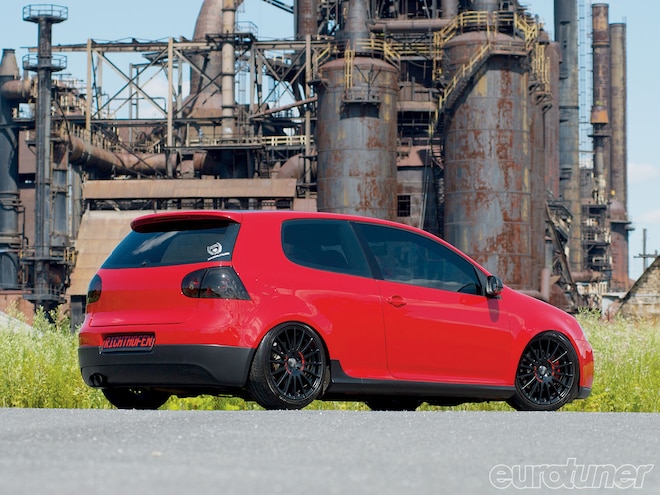 This GTI is known throughout the community as Richthofen or the Red Baron. The nickname comes from Germany's ace fighter pilot during World War I - Manfred Albrecht Freiherr von Richthofen. With 80 confirmed combat victories, he became a German icon and a legend of pioneering aerial warfare. 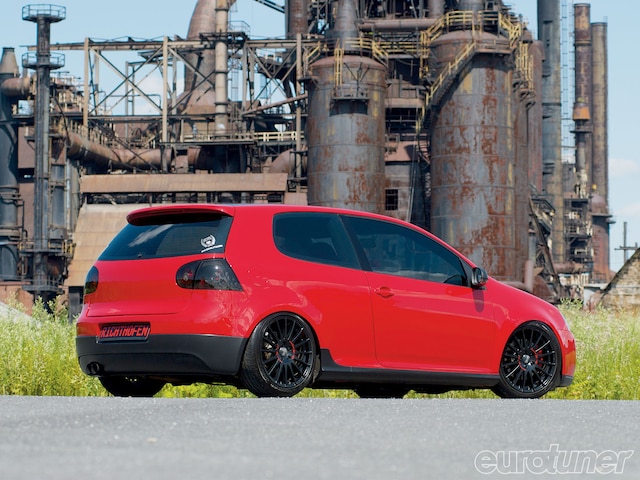 When Shawn Licthtfuss picked up his Tornado red '06 GTI, he set out to incorporate the legendary Red Baron theme using OEM parts and functional upgrades. "I really wanted the car like a fighter plane - loud, low and stripped down."

Drawing on influences from Richthofen was second nature. "My last name is German. My grandparents are immigrants and my grandfather was into German cars. He had a Beetle and introduced me to the VW Scene. My mom also had a Beetle," he explained.

In fact, Shawn was marked early in life with the VW brand. "One of my first memories was burning myself severely on my mother's Beetle exhaust pipe. I still have that scar today," he laughed.

When Shawn turned 16, he earned his driver license and jumped into his first VW - a Mk1 Rabbit Diesel. This was followed by a '83 GTI. His two Mk1s improved his technical knowledge at a young age. Sadly, he had to say goodbye to the scene altogether when he joined the navy a year later.

Having served for five years he returned to dry land and became a cement mason. In his spare time, he also competes and teaches as a professional submission fighter, having studied martial arts since he could walk.

But best of all, his affinity for German cars was re-ignited by two old school projects - a VW Dasher and Audi 5000. "Then I got involved in the truck scene, followed by sport bikes," he continued. "I rode for a couple of years then got married. I had a couple of bad bike accidents but still wanted something fast. I told my wife I'd get out of sport bikes if I could pick up a GTI." So his wife agreed and in 3/08, Shawn embarked on a new journey with his Richthofen GTI.

Addressing the performance was first. Since his mindset was to keep things close to original, an S3 conversion was the perfect match. "I knew it was the best fit for me because unless I went widebody, a big-turbo would be overkill," he reasoned. So the 2.0L 16v FSI was upgraded to European Audi S3-spec with a larger K04 turbo, intercooler, injectors and cam from AWE Tuning. A Porsche diverter valve was also included for healthy boost recirculation.

To improve fueling, AWE used Shawn's GTI as a test mule to develop its high-pressure fuel pump. Airflow was also enhanced with its cold-air intake.

With larger turbo setups, there's a higher chance of sludge build-up in the intake and engine, so a Eurojet Racing catch-can remedied this issue.

The added grunt warranted a stronger clutch, so a stage 3 Southbend kit was fitted with a 16 lb flywheel - which is 7 lb lighter than factory.

Presentation was equally important, so the engine bay was tidied with a carbon battery, fuse and radiator support covers to follow the performance theme. To clean up some clutter, Shawn deleted the reservoir tank and lines, then affixed JCaps polished caps.

Photo 6/11   |   Eurojet seats save weight thanks to carbon construction

Shawn continued his project to the chassis and exterior. Starting from the bottom, he chose motorsport-inspired OZ Superturismo GT wheels in a comfortable 18x8" setup. "I had carbon throughout the car and the OZ center caps accentuated everything. They also followed the red 'n black theme," he said. The flat-faced wheels were mounted with 225/40 R18 BFGoodrich tires.

Prior to his current setup, Shawn had insane stopping power from larger brakes but he switched back to factory. "My current wheels are so tucked I can't use the big brake kit anymore. But even stock, I don't have problems stopping. I even have less pad wear with the Schwaben rotors, Hawk pads and stainless lines."

Body and paint came next, but to make the Red Baron prominent among other GTIs, Shawn knew he had to take drastic steps. "I wanted something different from everybody else. So one of my closest friends and I made the front bumper. In fact, a lot of people think it's an aftermarket part but it's actually OEM," he disclosed.

The unique bumper was stripped of its fog grilles, headlight washers and turn signal caps. Custom vents were then molded between the foglights and FK badgless grille, giving Shawn's GTI a distinct look. A Jetta lower grille was thrown into the mix, which was trimmed for a laser jammer.

When time came for paint, the center grille was coated with matte black by a local hot rod shop. With the badgeless grille, the hood notch was filled but an emblem was ghosted onto the center of the hood in gloss black paint. "We got the idea from the new Scirocco," he told us.

Not completely finished with the exterior, Shawn shaved the door moldings, rear emblem and antenna. A smooth hatch blend was molded into the trunk and a Euro rear bumper was installed.

Shawn was infatuated with the details so a polished aftermarket Porsche cap was fitted. "I took the Porsche cap apart and fitted it to a VW cap," he explained. Shawn continued the Porsche inspiration to the interior. "My signature is Porsche taste on a VW budget," he laughed. "I always loved the Techart stuff, so I modeled the interior on their 997."

The interior panels painted body color on the Techart 997 were applied to Shawn's Mk5. The Momo Champion steering wheel was also sourced from a wrecked 944

Shawn then upholstered the armrest to incorporate the red stitching to match the Edition 30 e-brake handle. The shift knob and boot were custom made, incorporating the GTI emblem.

The seats returned to the fighter theme with lightweight carbon buckets from Eurojet Racing. To save more weight, the rear bench was ditched and replaced with carpet.

With plenty of raw performance in the Red Baron, Shawn installed a K40 radar detector and jammer. "I'm not into stereos but like going fast, so the system is wired into my gauges and even talks to me," he smiled. Eight sensors were strategically placed around the car - all using bluetooth to minimize wiring.

"People in the VW scene either love or hate my car," Shawn concluded. But with a well-executed theme, high performance upgrades and menacing attitude, how could you possibly hate the Red Baron? Unless you're caught in its dust... 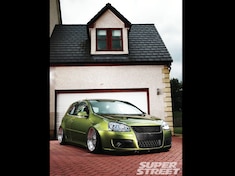 I had the distinct pleasure of selecting a car that showcased the best stance in the Euro scene. Ultimately, the boys from across the Atlantic do it best and Chris Peacock’s 2006 VW GTI is one of the most famous examples. - Super Street Magazine