Thought About Building A Replica Of BMW's GT2 ALMS Racecar? Gthaus Has All The Flossmann Parts To Make It Possible. 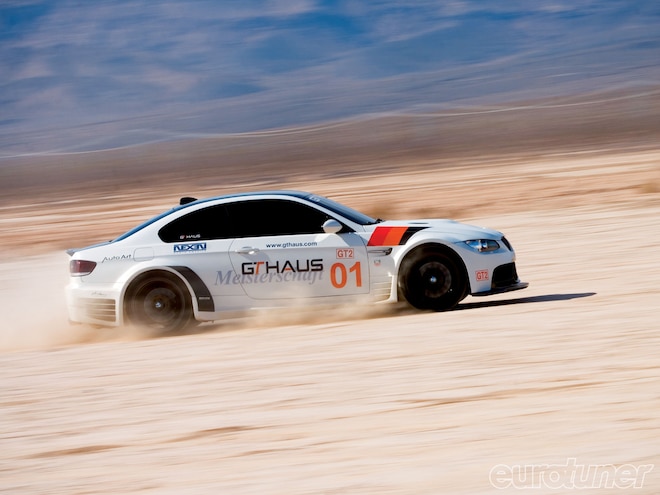 Spoiler alert: if you haven't already read the Tuner GP story in this month's issue, look away now - the two supercharged M3s didn't win the event, and part of the problem was a lack of traction on the road course. OK, they didn't have enough power to deal with the 900whp Audi either, but let's not get ahead of ourselves...

Watching the Gintani and G-Power M3 teams trying to control output that measured up to 590hp at the wheels, it was obvious that they could have used more rubber on the road. But up to now, widebody options for the E90 and E92 M3 have been limited. However, we were on the trail early, sniffing out the eye-popping pink M3 widebody from Japanese tuner Studie AG back in the 7/09 issue.

The car was fitted with a Floßmann (Flossmann) Auto Design "Black Falcon" GT2 body kit that allowed 20x10.5" rear wheels. This both widened the M3's track for greater stability and gave it more rubber on the road for improved mechanical grip.

Fast forward to the recent SEMA show (also in this issue) where we stumbled across this incredible creation from GTHaus in Chicago, IL. The company was established nine years ago by owner John Kang. It's the US distributor for European brands such as Arden for Jaguar and Range Rover, plus Meisterschaft Exhaust Systems, as well as Kreissieg exhausts and Neez wheels from Japan. They also distribute Flossmann products, including the stunning ALMS

The GTHaus/Flossmann GT2 ALMS body kit is produced entirely from carbon fiber and carbon/kevlar composites that save about 148 lb of weight from a stock M3. It will fit any BMW E92 coupe and allows you to build an almost exact replica of the Rahal/Letterman M3 racecars that competed in the 2009 ALMS series with remarkable success. 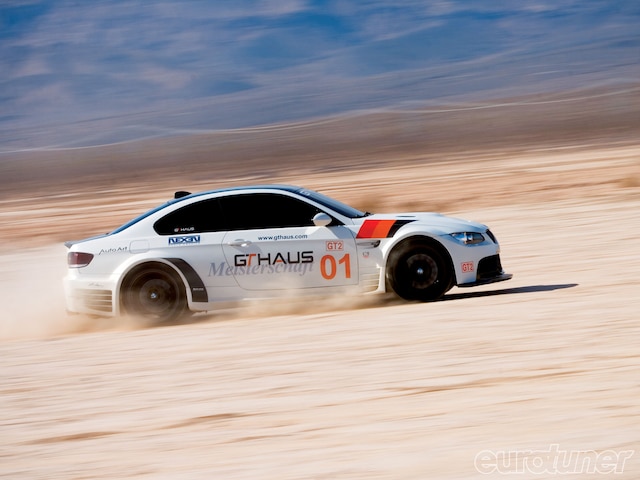 Inevitably, a carbon widebody isn't going to be cheap, but it is authentic and utterly comprehensive. The full carbon kit costs $12500, while a cheaper fiberglass version is $10k. For that you're getting the front and rear bumpers, front fenders, rear quarters and side skirts. Optionally, you can buy the carbon hood, trunk and mirrors as well. The more ambitious can even buy a vented roof, rear wing, carbon doors, undertray, carbon motorsport dash, etc to recreate the racecar with great accuracy.

The kit assembled by GTHaus on its M3 Coupe is more representative of what most street-legal cars might use. It doesn't have the huge GT2 rear wing, for example, which would simply give the cop somewhere to lean while he's writing your ticket. However, the company is working on a street wing that won't attract as much attention.

The package was painted in Lamborghini's matte Balloon white to match John's BMW HP2 Sport motorcycle, of all things. Onto that, the tuner added motorsport-themed graphics that enhance its visual impact - ordinarily, we ask for vinyl to be removed for photos, but these seemed to work

Fitting is relatively straightforward, with the bumpers and front fenders bolting on as direct replacements. The rear quarter panels are another replacement part that need some expertise to install, while we're told the skirts also need some massaging.

Of course, the idea behind any widebody is to create larger fenders for wider tires, and this GT2 conversion can fit up to 20x11" front wheels and 20x13" rears. Not enough? There's a Flossmann GTR version available from GTHaus that's even wider, but would be impractical on the street. There's also a milder GT3 version if you don't need such width.

For its SEMA car, GTHaus developed these 20x10.5" and 20x12" RAD Dynamics forged magnesium wheels, which are made in Japan by the company that manufacturers its Neez wheel range. The tire sizes are 255/25 and 285/30 R20 respectively, although John admitted there's room for up to 325/25 rears!

With the show's time constraints, engine mods were limited to the company's own Meisterschaft exhaust system that comprises cat delete pipes, its GT2 rear muffler and even an underfloor aero shield designed to maximize the airflow under the car.

Once the SEMA show was over, GTHaus expected to install a Brembo big brake kit and supercharge the engine to complete the car's transformation.

The sum of all these individual parts is an impressive street car. In fact, we photograph hundreds of cars each year, but few have attracted as much attention on the street as this GTHaus' BMW M3. The reason why? Well, it didn't hurt that we shot the car around Vegas, where people are expecting to be amazed. However, there's also something special about hearing a racecar accelerate down the road - you get a tingling sensation from your ringing in your ears that causes your heart to pound faster.

Once you hear the GT2 exhaust on this M3, people instinctively turn and see the graphics and aggressive widebody. Cars like this aren't usually spotted on public roads, so the reward is something your buddies will rarely get a chance to see.

When the GTHaus M3 left the SEMA show and hit the Las Vegas strip, you can only imagine the phenomenon it caused, as slack-jawed onlookers reached for cellphone cameras. So when it looks like and drives down the road like a racecar, accompanied by a thunderous exhaust note, it's not something that's easily ignored or forgotten. 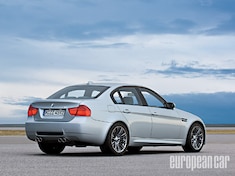