This 335whp Saab 900 Turbo Will Make You Think Twice About The Swedish Brand. 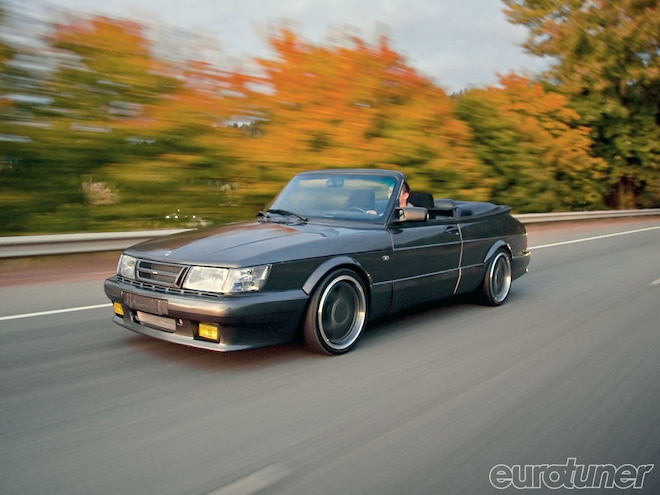 There aren't many automakers that can claim to be "Born from Jets". The slogan coined by Saab has been used to sell its cars to the world by marketing its aircraft heritage. And while US buyers don't really have the Saab brand on its high-performance radar, its engineers continued to produce sleek, sporty vehicles. Cars like the 250hp 9-3 Aero V6 Turbo made headlines since it was a relatively quick sedan with plenty of luxury and class. But the Saab lineup has never really 'taken off' in the US, so where did they go wrong? After all, most of its line-up featured turbocharged cars, and has done since '78. That makes them suitable for tuning, and there's a small band of enthusiastic US tuning shops ready to help you find big power.

Like a Christmas miracle, we can finally check off an entry on our et to-do list - find a Saab feature car. So we proudly introduce the first Saab to hit the pages of et in the magazine's history!

The proud owner is Aaron Elledge from Tacoma, WA. He has European cars in his blood but, unlike his friends, the 26 year-old didn't seek a ride with hundreds of tuning options or high social status. Instead, he looked strictly for performance. And for the money, he discovered Saab offered the best bang for the buck.

"I was turning 16 and started getting into cars," he began. "I thought turbo four-cylinder stuff was cool and was impressed with what was available."

The 900 Turbo Coupe and Cabrio sported intercooled turbochargers, so when Aaron turned 17, the high school student picked up a '87 900 Turbo Cabrio.

"My budget was around two-grand," Aaron told us. "It's what I made working part-time while in school. I figured I could get more power from a Saab than a Mk2 VW."

With 89k miles on the odometer, the car was in great mechanical shape but its creature comforts and appearance had seen better days. "It was a 15 year-old car," he continued. "The paint was horrible, the top didn't work and the seats were trashed."

Since it was Aaron's first car, he wasn't experienced with the art of wrenching or fabrication. So his father trained him. "He taught me everything I know about cars. He's built everything from Beetles to Karmann Ghias and Chevys," Aaron explained.

Because of a relative lack of parts and tuners, there were few bolt-on kits or accessories readily available. "That was part of the frustration, but also part of the fun. A lot of these things hadn't been done before," he said.

Aaron resorted to junkyards and eBay to source OEM parts. He began tearing apart the interior. He dyed the panels black, including the trunk. New carpet was pressed in and Sony audio components improved the ancient stereo.

Some of the rare additions included a leather shift knob and boot, which were factory options on the 900, plus a Fittipaldi steering wheel from a Saab rally car. The last addition was Corbeau GTS-II seats upholstered in microsuede.

Aaron spent just as much time restoring the exterior, starting with the body kit. At first, he pieced together an original SPG kit. Once installed, it was too conservative so he began a mission to locate an OE Airflow kit, which was never sold in North America. "You could order it as a dealer option overseas," he explained. "Few cars had it, but I found a German car with it in the US."

Aaron fitted the rare bumpers, wheel arches and side skirts. He'd also picked up a rare rear decor panel to fit between the tail lights. New head- and foglights plus a late-model rear spoiler followed.

Before Aaron could sign off on the exterior, he rebuilt the convertible top and resprayed the body its original Edwardian grey.

While the project was ongoing, Aaron rolled on 15" eight-spoke Saab wheels but recently modernized to a set of affordable 18x7.5" Sportmax wheels, modifying the center bore to retain his Saab center caps.

As we already mentioned, the 160hp 2.0 16v turbo motor was potent for its era. "A lot of my friends had Hondas. They'd add turbos but would barely get the power I had stock," he laughed.

He started messing with the automatic performance controller, which tweaked the knock sensors and boost level. An open air-filter and sports exhaust freed some additional ponies. "At that point, it was getting lean as I was maxing-out the fuel," he discovered. And yet the 900 managed 215whp, but that wasn't enough...

"I started reading about Megasquirt standalone engine management," he continued. "It took six months until I got it installed but took a week off work to get the system running."

From there, new parts flowed into the family's workshop - uprated injectors, equal-length headers, 3" downpipe, TiAL external wastegate and Precision front-mount intercooler were among the major components for the 16v. Aaron also swapped through four different turbos before he arrived at the current T3/T4 hybrid.

Custom cams helped the motor attain a higher redline, but the valvetrain couldn't keep pace. The motor was toast, so Aaron rebuilt the block, boring it .040 over for a set of forged Mahle pistons, new rods and Total Seal rings. The compression was also lowered to 8.75:1 thanks in part to a cylinder head swapped from a later 2.3-liter engine.

With a conservative tune, Aaron strapped his Saab on the dyno and put down 335whp and 330 ft-lb. This was considered a tremendous feat considering nobody has previously attempted what he'd accomplished with that combination of parts. According to Aaron, there's probably another 50whp to come but he's reined it in for drivability.

Aaron admitted the transmission was the weakest link. "When Saab added the 16v turbo motor back in the '80s, they never upgraded the transmission," he revealed. As a result, he's on his fifth transmission; however he's reinforced it with a limited-slip differential, steel diff cover, stronger case and shift forks plus a larger pinion bearing. Most of the earlier problems apparently came from the casing flexing, but the new components have made the drivetrain almost bulletproof.

A Swedish Dynamics clutch and Sachs pressure plate were finally installed to handle the power. And for the gearing, Aaron retrofitted autobahn gears, which were never available in the US. This allowed a 175mph top speed, better distribution of power in each gear and more fuel economy.

Chassis upgrades were just as difficult to source, but Aaron fitted Koni dampeners, Intrax springs and new bushings. The brakes calipers were rebuilt and the original rotors ditched for slotted and drilled versions.

After nine years of hard work, Aaron has reminded us not to forget the Swedish brand. He's shown there's potential in these maligned automobiles, even the older ones that cost virtually nothing. See our brief Saab tuning guide elsewhere in this issue for an idea of what models to look for and what you can expect them to produce.

Thanks: my father and wife