Marshall Middendorf Lays Down The Law With His 462hp Supercharged BMW M3. 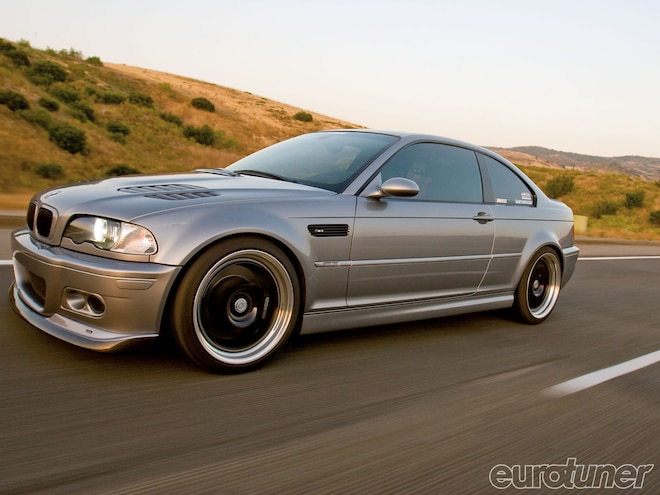 It's hard to believe BMW introduced the iconic E46 M3 ten years ago. Producing 333hp and 262 lb-ft from its 3.2-liter motor, it carried BMW's most powerful naturally-aspirated six-cylinder at the time. The third-gen M3 also saw the introduction of its SMG - a F1-style electrohydraulic six-speed transmission with paddle shifters.

The car's popularity is reflected in the countless upgrades readily available from an army of tuners. As a result, the E46 M3 is one of the most common cars on both the tuning scene and racing circuit. So when Marshall Middendorf picked up an '05 M3 SMG, he already understood the car's capabilities and tuning options.

As a practice run before this car, Marshall previously owned an E46 M3 Convertible. Equipped with an intake, coilovers and exhaust, it was a fun cruiser but Marshall had more ambitious plans for his next M3. "My goal was to make it into a street-drivable show-car," he explained.

Subsequently, Marshall contacted Bullet Motorsports Speedlab (BMS) located in Santa Ana, CA. Sadly, the tuner recently shut-up shop but it used to specialize in everything from service to repair and performance tuning.

Taking a step inside the shop, Marshall found half a dozen BMW racecars and knew he was in good hands. And since he came from an engineering background, Marshall collaborated with BMS on several new products, and eventually took a stake in the company.

As the partnership grew, the M3 headed into surgery. BMS looked at forced induction as the most efficient route to power gains. Faced with many options, Marshall chose a Dinan supercharger because BMS carried the parts as a Dinan dealer

The Dinan supercharger kit included a gear-driven Vortech centrifugal blower that would build boost to 5.5psi. There was also high-capacity aluminum radiator and oil-cooler, plus an enlarged intake plenum and larger throttle-bodies. To address fueling, larger injectors and a fuel pressure regulator were added. Finally, an intercooler would mount behind the front bumper. Although not included in the kit, Marshall added Dinan's exhaust as well.

Once the hardware was in place, Steve Dinan recalibrated the ECU to produce a claimed 462hp and 328 lb-ft. Unfortunately, the owner never dynoed the car, so it's unsubstantiated but the car was undeniably quick, especially with Dinan's 3.91:1 LSD improving acceleration.

The chassis came next, with Dinan's suspension kit stiffening the ride but retaining daily-driving comfort. A set of Ground Control sway bars and control arms were also fitted to improve track behavior.

Stopping power came from massive 14" StopTech slotted brake rotors with black four-piston calipers fitted front and rear. With this combined setup, Marshall was able to push his car on the track and drive it home without breaking a sweat.

Once the car was mechanically complete, the owner shifted focus to aesthetic upgrades since he still wanted a show car. "Back then, Vorsteiner was a newcomer and wasn't as big as it is now," he revealed. So he ordered the vented hood, trunk and rear diffuser and painted the carbon before installing it. More carbon arrived in the form of a Schnitzer front spoiler, side grilles and roundels. And finally a staggered set of 19x9" front, 19x10" rear HRE 540R wheels were fitted, the centers painted black to compliment the carbon fiber.

For six months, Marshall roamed California in his supercharged beast without a single complaint. But the time inevitably came to take the project further. "I decided to make it more of a track car," he explained. So the second phase began, starting with the interior.

The goal was to save weight and so he eliminated the rear seats and spare tire. But then the project got crazier...

The M3 had a factory sunroof, but they decided to rip it out and fit a complete carbon fiber roof from the European M3 CSL. Next, the overweight heated seats were substituted for Cobra's carbon fiber Susuka S seats. Each seat weighed only 8 lb.

For both chassis rigidity and track safety, BMS fabricated a four-point rollcage, which was welded into the body. The suspension was also changed to a more track-appropriate TC Kline coilover kit using two-way adjustable Koni dampers.

While prepping the car, Marshall felt he could improve its show-stopping ability without jeopardizing its track integrity. So the E46 paid a visit to Eaglewood Accessories in Hawthorne, CA where the dash, interior trim and door panels were upholstered in red and black alcantara to match the Cobra seats.

Marshall then fabricated his own pedals, door lock pins and red anodized shift paddles, which he now offers through his company MRTM Design.

Finally, Marshall delivered his M3 to Method Sounds in Mission Viejo, CA for a sound system. Now we know what you're thinking - how is this a track car? And Marshall admitted he receives flak for having a system, but reassured us it's easily removable.

The door speakers were swapped for 6.5" MB Quartz components with 1" tweeters. The trunk enclosure features two 10" JL Audio subs mounted inside the spare wheel well. The speakers receive power from two professional-grade TRU amps. And once the system was complete, it was wrapped in suede to match the rest of the interior.

The M3 is no longer a daily driver, being reserved for weekend races or shows instead. But he's having fun with his current daily driver: an E90 M3 sedan. It's slightly modified but has to chauffer his two year-old daughter, so it seems unlikely it will become as hardcore as the E46 for now.