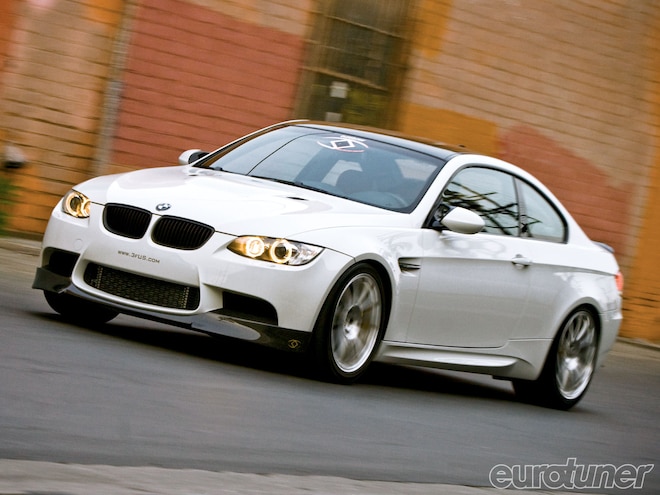 It's 3am and the owner of this '08 BMW M3 is driving home from a car show in Southern California. The highway is dark, secluded and quiet as a grave. The only thing keeping him awake is the radio. He takes a careful look in the rearview for approaching vehicles - nobody's coming. His eyes squint at the long straightaway ahead for potential speed traps, but he sees nothing. Finally, he has an opportunity to test the limits of his supercharged 4.0 V8 Coupe. 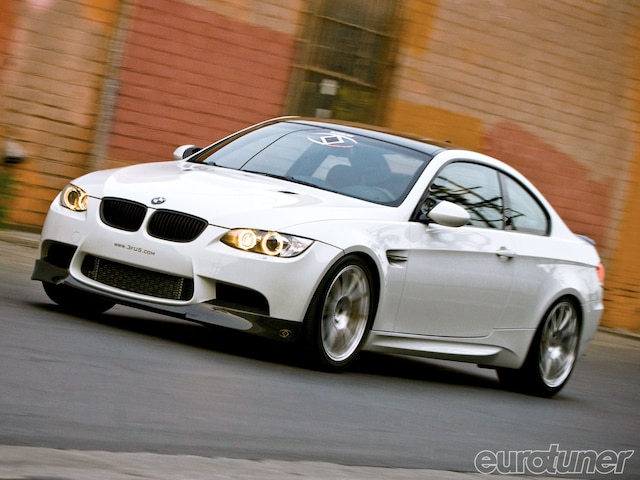 With both hands firmly grasping the steering wheel, he downshifts into fourth with the paddle shifters, igniting the seven-speed DCT transmission. From 80-130mph, the Bimmer accelerates like a cannonball fired into battle. At 130mph, he shifts into top gear and the speedo continues to climb like a jet. The car feels solid.

Impressed, he refuses to lay off the gas pedal - 160, 165, 170... The driver finally lifts off the throttle and coasts to cruising level with an uncontrollable smirk.

If you've driven an E92 M3, you understand what the owner felt. These amazing cars are nothing more than soldiers ready for battle. They're born as experts in power, speed and handling. But if you add aerodynamics, suspension and a supercharger to the equation, they become unstoppable.

From the factory, the car has a potent 414hp V8 that redlines at 8400rpm. Its weight distribution is near 50/50, optimal for driving twisties. It also has a top speed of 155mph, which is easily achieved on the open road.

With the E92 M3 thriving on the streets for two years, the tuning options have multiplied. A plethora of brands and parts make it hard to decide what to buy, but this Coupe from 3F Engineering might get your attention.

According to the shop, everything on the car was fitted for function, but we can't deny it's outright sexy as well.

New in the scene, 3F (Form Follows Function) started with a group of aerospace engineers. Like most M3 owners, they saw the versatility of BMW's ultimate driving machine. "It's a car you could take to the track on the weekends but also drive everyday," explained Mike Tran, 3F's director of marketing. "So we decided to make aerodynamic products that actually work on the street or track."

What a drag
The M3 is limited to 155mph, but with software modifications it can actually reach 180mph without power mods. However, the aerodynamics and chassis components weren't really intended for such speeds. So 3F's engineers fabricated a package to reduce drag and prevent instability in these situations. The parts were tested on an airport runway using sensors to measure airflow and downforce. The team noticed improvement in stability past 120mph, especially when the stock car became noticeably less stable over 150mph.

According to 3F, its project car remained smooth. And while not track-tested yet, the additional downforce should produce better high-speed traction and cornering.

The kit is relatively simple and comprises just three parts: a front lip, rear diffuser and trunk spoiler. The lip extends into the large air vents within the front bumper. We were told it's curved upwards to create more flow into the air pockets. The rear diffuser and trunk spoiler also help with downforce. The sides of the diffuser, for example, are designed to reduce lift, while the trunk lip is angled to move airflow downwards.

3F manufactures its carbon using VARTM technology - vacuum-assisted resin transfer molding. "Other companies use a fiberglass core where they either overlay the carbon or vacuum-bag it with fiberglass and carbon. They do this to save money, but it's still soft and can flex or even warp in the heat," Mike explained. "Once our carbon is dry, so it won't flex."

All 3F carbon products are one-by-one weave to match the pattern on the M3's carbon roof. And all the California-made products use factory mounting points for easy installation.

G for power As for the M3's other mods, it has a Gintani supercharger kit under the hood rated at 600hp.

In our Tuner GP (et 2/10), Gintani finished second in both the dyno and quarter-mile competitions with the same blower used here. This particular car was the first Gintani supercharged with a DCT transmission, but it seems to be holding up well.

It used the same Vortech T2 blower with its eight-rib pulley as a manual car. The kit also included a larger intake plenum powdercoated white, plus a chargecooler and carbon airbox. "The software was harder to program but the DCT now pulls harder than the manual cars," explained Alex Gintani, founder of Gintani. "It can't handle as much torque as the manual, but the DCT really kicks ass."

The parts are matched to an Akropovic exhaust - a company known more for its motorcycle components - employing 90mm tips that fit snuggly inside the rear diffuser. With 5.5psi boost, the car dynoed at 512whp and 350 lb-ft on 91-octane.

Gintani finished the Coupe by switching brakes and suspension. To lower the chassis, KW Variant 3 coilovers were fitted, which also deleted the factory electronic damper control.

A staggered set of 19" HRE P43 wheels were originally purchased for track use because of the lightweight one-piece forged construction. Capable for the street as well, Falken FK-452 tires were appropriately mounted to provide plenty of traction.

Being selective with its modifications, this M3 from 3F Engineering is everything you could ask for: power, appearance and status, there's not much out there that can match its form or function.