It's truly an art form when you mix old and new. Take hip-hop music, for example. Artists like Kanye West remix music from the '80s and '90s to produce hit songs. An artist with an international reputation is Ali Ziaii, but his forte is the Mk2 Volkswagen. This '89 Golf Rallye is his latest project, boasting a glorious mix of the rare Mk2 widebody chassis with modern power, traction and handling.

Photo 2/11   |   Everything is R32 about this Mk2 including the dash, console, steering wheel, pedals and shifter

The Golf Rallye has an unmistakable shape with its box arches, rectangular headlights and G60 supercharged 1.8-liter 8v. The Mk2 was a rock star in its day, especially with the Syncro all-wheel drive system. The car even made a brief appearance on European rally stages.

Limited to 5000 units, the Rallye never officially made it to US dealers but diehard enthusiasts have somehow smuggled them in.

As you can see from Ali's project, he kept the exterior true to its 21 year-old roots with minimal body modifications, white paint and motorsport-inspired gold wheels. The magic unfolds beneath the hood and undercarriage...

Like a bottle of Dom Perigon, it was VW's most esteemed and tasteful offering, which is why Ali decided to create the unthinkable - swapping the R32 motor and drivetrain into his Mk2 Golf Rallye.

As a hardcore Mk2 fanatic since he entered the VW community over 15 years ago, Ali's recognized throughout the scene as a pioneer in motor swaps, having been among the first to transplant a supercharged VR6 12v and VR6 24v into the confines of a Mk2. "I had a streak of having a car featured in a magazine every year," he told us. "But there's been a four or five year drought, and this car has been a slow process."

Initially, Ali bought a Rallye shell without a motor or interior. But the project involved too much work so he sold it. "I kicked myself in the butt for selling it," he remembered, "so I found a complete car later. There was nothing wrong with this one but I got bored one night and yanked the motor. Then I started stripping everything.

After finding an R32 engine and drivetrain, the project accelerated into high gear. Since Ali had experience with a VR6 24v swap, he found the R32 swap wasn't much different. He fabricated his own mounts and brackets to align the motor, taking hours of trial and error to angle the motor perfectly. Even so, the driveshaft had to be modified slightly in order to remain straight.

The next major task was fitting the Haldex differential. "A lot of companies sell kits but I decided to fabricate my own," he recalled. "It took a couple of tries but I got it eventually."

Another daunting task was the axles. "I had to take measurements and ship axles to the Driveshaft Shop a few times. It took a couple of months," he explained.

With the restricted space in the Mk2, every component demanded his attention. The exhaust, for example, required Ali to fabricate a system from the manifold back. The system comprised of 2.5'' stainless steel piping with a custom catalytic converter, with the pipes squeezed between the driveshaft and body.

An open air-intake improved throttle response and Ali finished his performance adders with a custom tune by C2 Motorsport.

For the chassis he installed H&R coilovers, converted the hubs to five-lug and fitted six-piston Brembos. However, clearance issues fitting the wheels he wanted meant he had to get custom wheels made and downsize the brakes. So he used 13.1'' R32 rotors together with its four-piston calipers. The desired 17x8.5'' AutoArt mesh wheels then presented the classic old-school look he was after.

Like a patient out of rehab, the Rallye was driving and handling better than VW intended. But Ali wasn't done. He shifted focus to the exterior and interior. The dark blue Rallye had its rear wiper and emblems deleted. Then the original paint was stripped and resprayed a dazzling Ford white to complete the makeover.

When it came to the interior, the owner maintained the factory feel, retaining the original Recaro leather seats but upholstering the centers in black leather with white stitching. A Corrado rear bench was sourced and upholstered the same way.

Continuing the leather goodness, the door cards, shift knob, e-brake handle and trim pieces were matched. Even details such as the belt anchors on the B- and C-pillars shared the same cloth.

Updating the dash and center console came next and Ali didn't make life easy for himself. The factory Mk2 piece was removed and swapped for the R32 part. The dash took as much massaging and time to fit as the motor and drivetrain swap - Ali had to continuously trim and test-fit the dash until it sat snug in the cockpit. The same went for the center console. "I wanted to make it look like it came from the factory," he repeated. "The dash went in and out 47 times to make it look perfect and the console was almost as bad." Unlike some half-ass interior swaps, Ali reported all air vents work properly.

From the power windows to door locks, traction control and more, everything that needs electricity ran like clockwork. Ali admitted the only place he modified the wiring was the head- and tail lights. In this instance, he needed different connectors for the 21 year-old lights.

For the stereo, Ali wanted to keep it close to factory. At first, he even retained the stock radio and amp but eventually an Alpine head unit was installed to allow iPod integration.

Speakers from Boston Acoustics and Alpine improved the audio quality, while a custom box showcased two 10'' JL Audio subs and an Alpine amp in the trunk. The box was curved and carpeted to match the OEM style, and as a final touch the rear shelf was upholstered in leather with white stitching to complement the seats.

"I built the car in my garage, mixing and matching as many OE VW parts as possible to make it look as though it came from the factory," he told us. "If you count the days, it took almost three months over the span of four years. I worked at night and on weekends when I was motivated, but it's tough when you have a job, a house and girlfriend."

Ali displayed the Rallye at Waterfest and H2O International in '09, taking home Best of Show awards from both. Now he's thinking about adding cams and possibly forced induction, "but I don't want overkill," he said. "I want to enjoy what I have now and maybe do something unique. The car's really an old school meets new school thing. I was going back into the '80s with a modern twist." 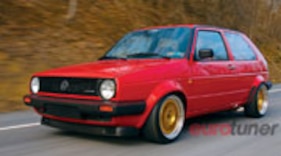 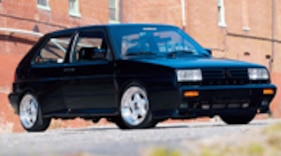