Lock Up Your Labrador, This Volvo 245 Wagon Isn't Your Average Grocery-Getter. 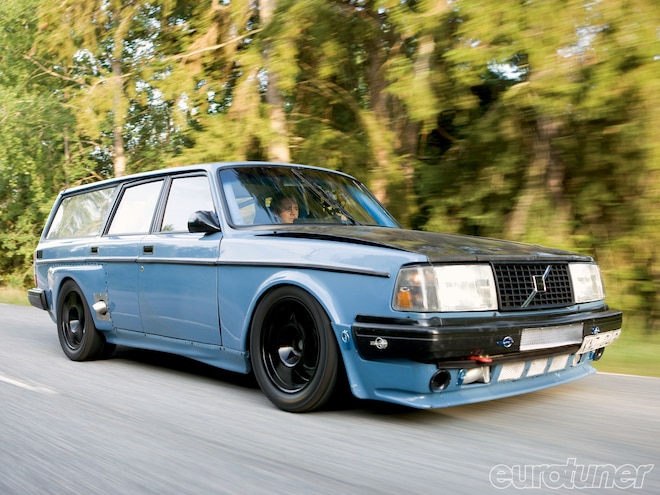 There's something über-cool about cars that aren't what they seem. They draw real car guys like moths to a flame. And this '81 Volvo 245 wagon is living proof that we all love something out of the ordinary. While most people would be scratching their heads and asking why you'd do this to a Volvo wagon, car guys nod in approval because it's a Volvo wagon! 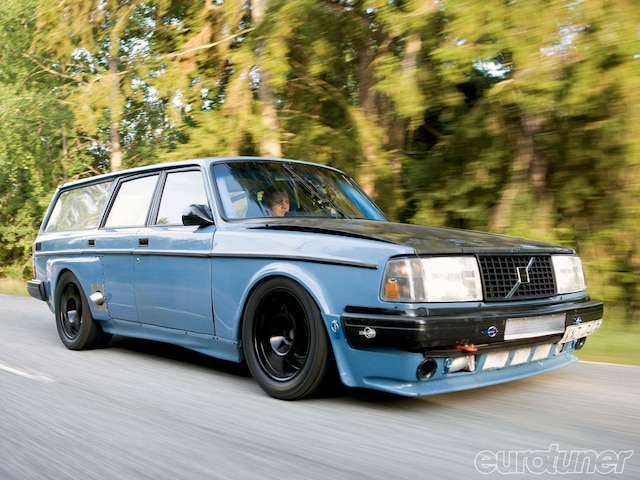 Let us explain: anybody with enough money can make an M3 fast. But for some guys, it's too easy. And for others, it's too predictable. There's something perverse about taking a grocery-getter like the Volvo 245 and turning it into a track car in your father's garage, on a limited budget, in your spare time.

Living close to Stockholm, Sweden the 28 year-old auto mechanic Tobias Wasserman was indoctrinated early. His earliest memories are of his father's blue '84 Volvo 245 GLT. It was followed by more Volvos until the 15 year-old bought his first car; a '72 Volvo 142 DL.

"The following year it passed the Swedish Vehicle Inspection with a 170hp 850 GLT motor as a "modified vehicle" for private use. Shortly after, I lost control and the car began to evolve... Unfortunately, my father hasn't been able to use his garage since, but he kindly extended it to give me more work space!"

The inspiration for the project was drawn both from the Group A Volvo 242 touring cars and the 850 wagon raced in the British Touring Car Championship. "Modified 240 sedans are quite popular in Sweden, but very few use the 240 wagon, especially on the track," Tobias explained. "I enjoy having something different and my plan was to build a 240 race wagon using a combination of 242 and 855 parts.

Power trip Having paid $800 for the 106hp, four-speed car, he bought the 2.3L GLT five-cylinder motor for $3300 from a friend who ran out of steam on his own project. "The inline five-cylinder engine is really nice to tune. It's fairly easy to get lots of power from them and they sound terrific!" Tobias confirmed.

As the power of his imagination grew, so did the power of his project. Tobias originally aimed for 300hp but ended up with far more. He started with a Chinese ST70 turbo mounted on a home-built exhaust manifold fabricated from 42mm steel tubing. He then machined a '93 Audi S2 wastegate, enlarging it to 40mm and used the lower half of a Scania truck intercooler, making 3'' pressure pipes for it and adding dual Bosch dump valves with return feeds.

"I enjoy finding OE parts that will work on my car. I'm experienced enough to know if a certain part can be used and it saves money for the aftermarket parts I really need," Tobias explained. "I used as many modified Volvo parts as possible, such as the 850 GLT cams, V70 coils, S60 intake, 3'' 960 throttle housing, shortened 960 oil pan, two V40 radiator fans and a 940 alternator with my own mounting.

"Then I got parts from other makes, such as an Audi wastegate, Saab fuel pump, Mercedes pressure pumps, Toyota oil pumps, etc. These generally had to be massaged to work. And in some cases, I made my own parts too such as the motor mounts, headers, pressure pipes, cam gears, side-exit exhaust, etc."

After Tobias had built the motor at home, he was pleasantly surprised when it "fired the first time and worked unexpectedly well," he said. "My buddies and I then spent time fine-tuning everything."

Then began his biggest headache; programming the Motronic 4.3 engine management and adding an extra controller to run five individual coils rather than the stock coil, distributor and rotor. He worked with friend Jörgen Gustavsson, but it took a lot of trial and error to get right. "We did it for the challenge," he said. "The first chip sucked but eventually we got the hang of it and an understanding of what worked."

Buoyed by success, he's building a new engine he hopes will deliver "a couple of hundred hp more." It uses a '96 850 block with JE pistons, SPM rods, a ported '04 V70 head with Autotech cams, home-made headers, Siemens 875cc injectors, his own aluminum intake manifold and a new turbo.

Pushing power to the rear wheels is a Getrag tranny from a BMW 535i with a custom bellhousing to mount it. It also has a lengthened driveshaft from a '89 Volvo 240 and he converted to a hydraulic BMW clutch assembly before adding a four-puck sintered-bronze clutch with Sachs Racing pressure plate.

Classy chassis With track days on the agenda, serious chassis mods were required. He started with custom-built Sellholm coilovers up front, which would lower the car about 4.5''. However, this meant the front ball joints would need to be moved 15mm further out, and 60mm spacers fitted between the joints and coilovers to maintain the geometry of the special Volvo lower A-arms. Machined 60mm spacers were also fitted to the steering linkages to prevent bumpsteer.

In the rear, the link arms were modified and lowered 2'' to work in conjunction with the Bilstein shocks and homebuilt height-adjustable Sellholm springs. This also gave him mounting points for the Sellholm's adjustable sway bar.

Firmer bushings were fitted all round and ambulance-spec strut tower braces were bought from Volvo to stiffen the front-end.

The brakes are another ingenious mix of factory and aftermarket. He utilized 360mm front rotors clamped by four-piston Brembo calipers, all from a '01 Jaguar XKR. In the rear it's a combination of 305mm discs with four-piston AP Racing calipers and a custom drum for the e-brake. There's also a bias adjuster to balance the set up.

When looking for wheels, the Swede liked the retro style of Compomotive's MO five-spoke design, especially since they would accommodate his large brakes. He opted for 17x8'' all round because a friend competes in the Swedish Camaro Cup series and could supply him with 265/640-17 racing slicks.

"I needed wide tires in the rear for better grip when I exit turns. And widening the track improved the handling," Tobias told us. However, this brought its own complications. He needed to extend the rear fenders, so bought and modified front flares from RP-Glasfiber in Kalix, Sweden. The front fenders are also fiberglass, while "a friend who works at a shipyard made the carbon fiber hood, which weighs only 9 lb."

The wagon also wears a Bross front spoiler, M3-style side skirts of unknown origin, a fiberglass rear hatch and Lexan windows all round (except the front screen). Further weight savings were found in plastic headlights from a US-spec car and a pair of Cup mirrors.

With the new fender flares both providing an exit for the tail pipe and covering the stock fuel filler, Tobias relocated the latter to the side window. A long tube feeds the 10.6-gallon fuel cell mounted in the middle of the diamond plate-lined trunk

Once the bodywork was complete, the owner did the prep work before his cousin (who works at a paintshop) sprayed the car in its original factory blue. "It makes the car look more innocent," Tobias suggested. "I honestly think the paint has saved me from being pulled over more than once - the Police just don't get it."

For the same reason, he deleted a rear wing because although it was "useful at top speed, the law doesn't like aftermarket wings and I didn't want to attract too much attention. I also felt it ruined the overall look of the car," Tobias said.

He was bolder inside, removing everything behind the front seats and lining it with diamond plate. He also removed the sound insulation and carpet, but kept it up front to look less hardcore.

The stock instrumentation wasn't going to suffice, so the speedo was replaced with a VDO dial that reads to 300km/h, while a giant KL-Racing rev counter with shift lights is mounted to the console. The center vents were also blanked off with diamond plate to mount a series of oil, water, AFR and boost gauges.

Looking forward We've already mentioned Tobias is building a new engine for the 245 and, money no object, he'd like to add a carbon fiber roof and tubular chassis but freely admits there's a long wish list. "I started the project in '04, so it's been in development for six years. The day I sell it or crash it beyond repair will be the day I'm done with it," he confirmed.

But for now he's content to fettle the car and continue cutting lap times with suspension adjustments. "At the first track event I attended, the Race Wagon behaved better than I expected, and my expectations were very high!

"The car got lots of attention, and it's still a curiosity when I race because most people underestimate a station wagon. I love to see the look on the faces of M3, Audi, Skyline and Porsche owners when I pass them on the track. They simply can't believe it happened - being passed by an '81 Volvo 245 DL is nothing to tell your friends about!" he laughed.