If Cars Were Girls, We'd Like To Take This Stunning Golf Diesel Home To Mother. 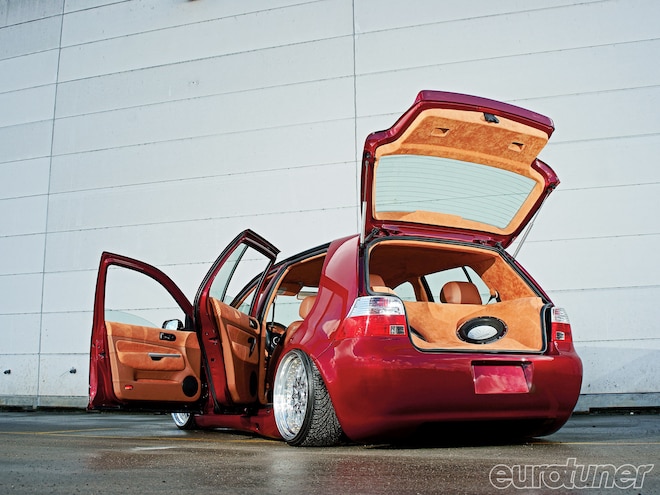 There are several mantras we live and tune by: 'if it's not rubbing, it's not low enough', is one of them. 'Less is more', is another. And, of course, there's the old favorite: 'what were you thinking?'

Undoubtedly, the first two phrases apply directly to this belly-scraping Mk4 Golf that won us over on first sight. The work of 22 year-old Niels Feys, a construction worker from Kruishoutem, Belgium, he spent the last three years building this maroon marvel.

Remarkably, it's his first car. Before this he was messing around tuning 49cc, 15mph Honda Camino mopeds, which is possibly why he was prepared to drive this Golf SDI; an even slower, non-turbo economy version of the European Mk4 diesel. "I've always been a VW fan, so I searched for a good Mk3, 4 or 5 online. I eventually bought this one because it was both economical and cheap to insure," Niels told us.

The fascinating thing about the global VW tuning scene is its regional variations. In the US, where fuel is relatively cheap, distances are great and credit was available, it made sense to buy a big engine and make it faster. Whereas many Europeans are faced with high fuel costs, expensive taxes, astronomical insurance and stiff anti-tuning laws. So it makes sense under these conditions to base your tuning project on a TDI and leave it mechanically stock, especially where public transport is readily available.

As a result, we see plenty of Europeans driving the coolest-looking cars that couldn't pull the knickers off a prom queen. That said, our European friends do have an uncanny knack of nailing the visual aspects, and Niels is no exception. With his custom paint, smoothed body, deep-dish rims, air-ride and drop-dead interior, this is one of the smoothest Mk4s we've ever encountered.

Spurred on by friend Jannick de Vlieger, Niels started small but built up to this full makeover by JV Tuning in Desselgem, Begium. They've been responsible for several previous feature cars and their work is world-renowned.

As is so often the case, plans for basic wheels and lowering led to so much more after somebody scraped down the side of his Golf.

With bodywork and paint needed, the owner dismantled the car himself before delivering it to JVT for the major tasks. This involved plenty of smoothing and filling, starting with the bumpers.

In stock trim, the bumpers have separate black plastic lower sections. These were molded and smoothed before paint. In the case of the front bumper, he swapped the lower section for a Golf 4Motion part.

A badgeless front grille was then fitted along with a sleepy böser hood and Mk5-style headlights to complete the front-end.

Down the sides he had the moldings and repeater lights deleted, the finger cups filled on the door handles and a stubby mirror fitted on the passenger's side. At the bottom, Caractere side skirts were fitted and molded to the rear fenders.

He followed it up at the rear with a de-badged, de-locked, de-wipered tailgate that also got a hatch blend molded at the bottom to look super-slick. Throw in some M3-style light clusters and the exterior was complete.

The next step was to select a color. Originally black, Niels wanted to go either brown or dark red with the paint. Jurgen at JVT suggested a couple of options for each and a few drops of inspiration gave birth to this stunning burgundy hue.

"The reds they had missed the mark slightly. But then they added some drips of another color and there it was! An exclusive color that suited the car perfectly and compliments the interior so well," declared the ecstatic owner.

His early mods included a set of Mercedes wheels but the makeover called for something more dramatic. "I now have these 18'' Kerscher wheels with the big lips. I don't think I'll ever change them because they look like they were made for the car," Niels told us.

Of course, wheels are only part of the story. They share star billing with the hissing bits from German Airride Systems, which allow the Golf to drop to the deck at the push of a button.

The system employs two Viair compressors to fill a 15-liter tank mounted in the trunk. The driver simply selects the desired ride height with a controller under the heater dials, monitoring tank pressure on gauges in the ashtray.

The compressors are hidden from sight by the breathtaking suede cover in the trunk. It similarly conceals the audio system's amplifier, but reveals a pair of Audiobahn subwoofers.

The furry alcantara goodness spreads throughout the trunk to the headliner, door cards and upper portions of the dash. Everything else is covered in a buttery Montana brown leather that looks way too inviting. This is easily one of the best-executed Mk4 interiors we've seen and Niels credits Kustom Kreations for their incredible work.

While performance purists are probably gnashing their teeth at this all-show, no-go project, Niels doesn't pretend it's anything else. The Golf was purpose-built to his taste and specification, and the overall standard is world-class. Once again, we applaud the diversity of the European tuning scene by acknowledging this inspirational machine.