We Uncover The Story Behind This Unique Vw That's Half-Mk3 Cabriolet, Half-Mk5 GTI. 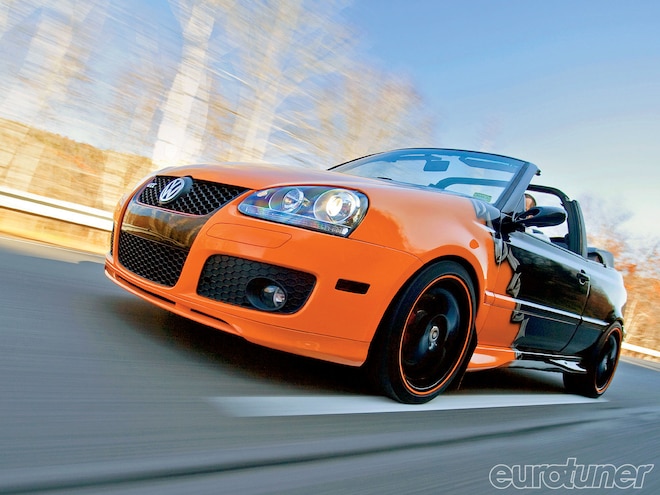 You're probably thinking to yourself, WTF! No, it isn't a photochop; this is a real project car from the lurid imagination of Marcio Da Costa. 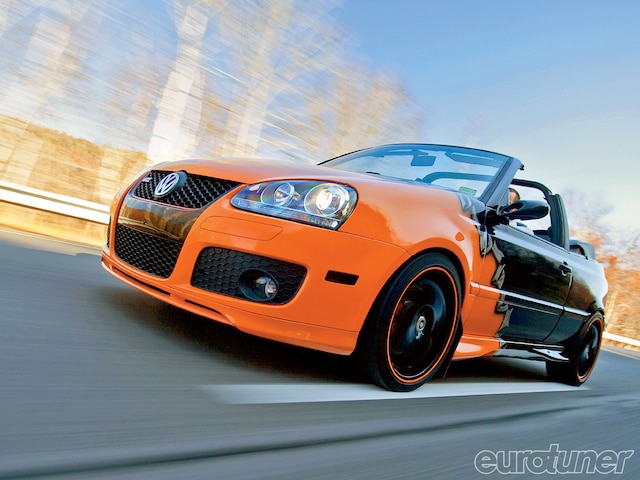 Spending his days as a mechanic in Connecticut, Marcio accomplished something not many VW enthusiasts have tried - mating two different vehicles together.

In the VW scene, there's been a handful of two-door Jetta conversions, countless Jetta or Golf front-end swaps, and loads of crazy engine conversions. But nothing comes close to Marcio's masterpiece.

His concept takes a '96 Golf Cabrio that's been face-lifted by a '07 GTI front-end, incorporating the Mk5's 2.0T engine, six-speed transmission and interior.

This physical form may not appeal to everybody, but we had to acknowledge the creator's wild imagination and flawless execution. Every panel and bodyline matches up, while the turbo two-liter engine runs like clockwork.

So how did Marcio do it? It's hard to believe, but he built it in only four months. "I was working on the car every day for 12 hours. Everybody from the bodyshop was helping, even the painter. I wanted to be at Waterfest '09," he reminded us.

Marcio later admitted his Cabriolet wasn't originally meant to be like this. "I lived in Germany for 25 years and always loved VWs - I never drove anything else. When I moved here, I didn't have much money, and the cheapest VW I could find was a Cabrio. All I wanted to do was fit a VR6 motor." And so he did, but unfortunately, Marcio made the fatal mistake of cutting the VR6 harness. So he rewired everything to the best of his ability, but problems plagued the ECU and the car didn't pass emissions.

Undeterred, the desperate owner bought a limited-edition Mk5 GTI Fahrenheit to source new components and get his beloved Cabby running properly. Or so he thought...

"I was going to remove the GTI's motor, tranny and everything necessary for the EVAP system," Marcio began. "I started stripping down the cars and the Cabrio was first to lose its dash, electronics and wiring." He then removed the VR6 engine and tranny, followed by the front bumper, rad support and suspension.

The naked Mk3 was next to the Fahrenheit GTI when a light bulb turned on. He had the crazy idea to meld the two together. "I called a specialist who was good with frames, but he told me it was impossible; there's no way that thing would fit. I'd need custom fenders, hood, doors, etc. But I decided to have a go.'"

Several days were needed for the frame alone. According to Marcio, the Mk5 sits higher on the rails, so he had to change the bottom rails and bend them to fit. He then cut into the Cabrio floor in the front footwells. The floor was cut in a T shape along the center console and all the way back - this would accommodate a 3'' turbo-back exhaust. The trunk area was then trimmed to fit the Mk5 fuel tank.

The Mk3 and Mk5 frames sections were joined, but it was then time to merge the body panels. Marcio started with the fenders because it was important to follow the same lines. Inevitably, this proved difficult because the Mk5 fenders were relatively flat, compared to the Cabrio, which had more curvature on top. So the Mk5 parts were bent to follow the Mk3 lines. The hood was also modified to the shape of the Mk3 windshield and body. And once the hood and fenders matched up, the front-end slid into place.

This included the 2.0T FSI engine, which Marcio upgraded with APR software, a Neuspeed intake and Forge diverter valve. The GTI's front suspension was also utilized, lowered with Eibach springs.

The owner then finished the exterior with more aggressive side skirts and a rear bumper. He also widened the rear fenders to accommodate bigger wheels.

Marcio's madness continued in the cockpit. The stock Mk3 dash and console were already deleted, but the Mk5 dash support was too wide, stretching out of the doors. So the side and rear sections were cut, while brackets were fabricated to keep everything in place. "I spent a full week on the dash," he explained. "And then the doors wouldn't close because the door panels were too thick. So I cut them down and molded them." The interior was finished with two-tone leather and suede seats to match the paintwork.

Inevitably, the most difficult task was adapting the Mk5 wiring to the Cabrio. "Everything was a pain in the ass. You never know what wire does what. I went through hundreds of pages of wiring diagrams to determine things like stability control, ABS and airbag sensors," he reminisced. "Now, everything works like original on the dash, the alarm, windows, power locks, EVAP system, lights... It all works!"

A project like this will also divide opinion among European tuning enthusiasts. Is it right to do something like this? You be the judge... We applaud Marcio since there's no denying the amazing workmanship his determination to be different.

Read all about the 1996 VW Golf GTI, brought to you exclusively by the experts at Euro Tuner Magazine.