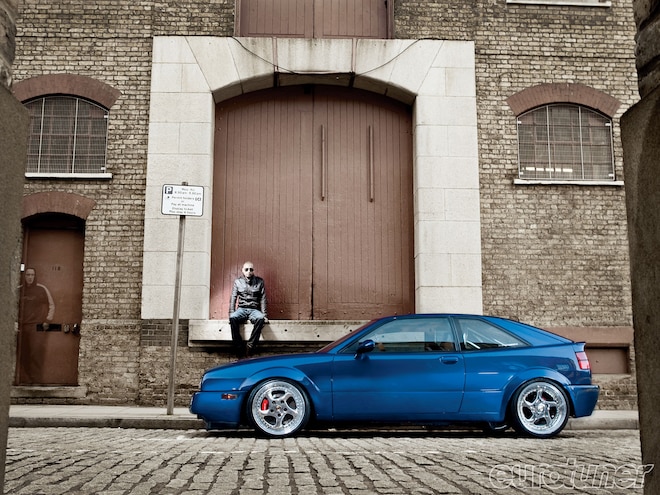 We're waiting on a cold, cobbled street corner in London's East End; a stones throw from the River Thames. Add some fog and a few cheerful Cockneys and we could be in a Sherlock Holmes movie. 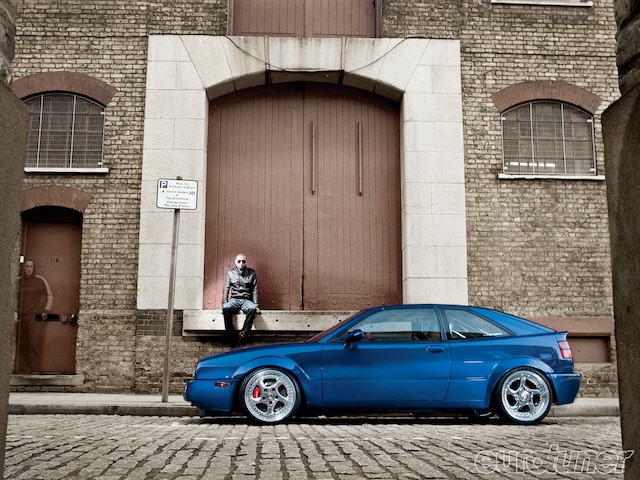 We're waiting for Sukh Pui and his Corrado. Their arrival is announced by a menacing rumble, punctuated by the whistle of a turbo as it tiptoes over speed humps.

The Iris blue SLC rounds the corner and the full impact of Sukh's project can be seen, lower than a snake's ass and bluer than Adriana Lima's eyes.

A resident of West London, England and a founder member of the original Westside VW crew, Sukh's an electronics engineer who's been soaked in the Veedub scene virtually since its inception. The list of former rides is long and distinguished; he came to his Corrado ten years ago by way of a Mk1 GTI, Mk1 Scirocco, Mk2 16v, Corrado G60, a few Audis, Passat, a TT and a brief fling with a Porsche - he doesn't want to talk about that!

Sukh's job frequently takes him to mainland Europe, and at the turn of the millennium he decided to go to the source to find the right car. He discovered his '92 Corrado on mobile.de; Deutschland's 'größter fahrzeugmarkt'. But surprisingly, this particular Corrado was originally registered in the good ol' US of A. Virginia, to be precise!

"Once I found the car I had a mate call the owner since I don't speak German. We arranged a viewing and flew over. The owner kept it in a barn, so his cat slept on it. He bought it to work on but never got round to it," Sukh told us. "It was a reddish-brown color with a 2.8 VR6 rather than the 2.9L found in Europe. The owner had bought a set of 16x10'' Edition S1 wheels, but couldn't fit them until the fenders were widened. We couldn't agree on a price, so I left it. Once back in London, I called the owner a few times and we finally made a deal."

Plan
Sukh had a plan... "I had good contacts in the Dutch and German scenes, and back then the British Pound was strong against the Euro, so it made sense to get the work done over there." So he used his network of friends to get the car built.

First, it went to Alex Smith in Germany for bodywork including those incredible, handcrafted metal fenders, Audi A6 door handles and a 993 brake-light beautifully integrated into the tailgate.

"Germany was ahead of us [Britain] back then; nobody fitted A6 handles on a Corrado. The trouble was, after he'd done it I had to connect them up. It took me two weeks and some seriously scraped knuckles to finally sort out the linkages. I needed to make the handles open the doors without putting too much pressure on the micro-switches, because they controlled the SLC's electric seatbelts," Sukh explained.

The Corrado then went to Holland for paint at NAZ Bodyworks in Zutphen. "It had to be Porsche Iris blue," he told us. "I've always loved that color."

After this, Sukh fitted the H&R coilovers that gave him the 120mm (4.7'') drop he wanted, while the new fenders enabled the car to accommodate the extra-wide Edition S1 wheels.

Following the DIY installation of the Porsche 993 mirrors and a Xenon headlight conversion, the car was shown to acclaim in 2003: "It was the first Corrrado with 10'' wide wheels in the UK," Sukh claimed, but he already had plans for '04...

This time he wanted the interior mods, so loaded his van with the Corrado's dash and a pair of R32 seats before making the 600-mile trip to Uwe Trim House in Germany.

Sukh had decided on Porsche Sahara brown leather for the seats, door cards, dashboard and console, with the headliner and roof pillars in matching alcantara. Not afraid to admit a mistake, he later swapped back to the original Recaros: "they were just better seats!" he told us.

Satisfied with the appearance, extra grunt was now needed. So the owner prepared to fit a supercharger but sold it at the last minute in favor of turbo power - and a couple of friends in Europe helped him out; Markus Heerdegen and Micheal Schomaker.

"It was the best thing I ever did!" Sukh announced. "Markus sourced an HGP turbo kit in Germany while Michael and I did the conversion in Holland. We then took it to JD Engineering in Lochem for an ECU re-map but found the timing was out. I wanted to keep it on the OBD1 Bosch ECU and the Dutch are brilliant at that. So once they sorted out the problems it ran fine."

After its installation, the engine bay didn't escape the beautician either. The motor and transmission were sprayed black, while anything else was chromed or polished to a high shine. It was at this point he added a carbon fiber rain tray cover and slam panel. He also decided to do more bodywork, drilling the front bumper to aid airflow to the FMIC, and fitting a debadged grille with built-in eyebrow spoiler above it. Other mods included deleting the side moldings, rear wiper, antenna and side markers.

Autobahn
The owner is a hard man to get hold of, regularly flying to Europe for work. With all that travel, you might expect him to spend weekends at home, but instead Sukh's summer is spent visiting European shows in the SLC. "I started going to shows back in the '90s, such as the original VW Mania in Belgium and the VW Treffen in Baarlo in my old Mk1; the Dutch were way ahead of us back then. My favorite shows now are MIVW, Edition 38, Players and, of course, Wörthesee.

"The 1100-mile trip back from Wörthesee last year was the furthest I've driven in one day. A lot of it was on unrestricted Autobahns, and that's what my Corrado was built for - it went past 160mph on the GPS and I was told to slow down at a toll station in France when they calculated my time between stations!" he laughed.

On those long trips, you need an exhaust with a great note on acceleration, but without the brain-numbing drone we've all experienced. After a stainless steel Bastuck system was installed, it solved all his sound problems except one; ICE. To prevent cabin fever on long-haul trips, Sukh armed the Corrado with an Alpine head unit. He then deleted the rear seat and fitted a Precision Power amp under the polished rear rollcage. It runs a 10'' Kicker sub in the middle of the trunk, while Infinity 6.5'' components deal with the mid and high frequencies.

Having done so much work over 10 years, Sukh decided to swap the wheels. He sold the S1s and after an agonizing decision went for a set of 17'' Porsche Turbo Twist wheels from Andre Kain's famous "UPS" Corrado.

Shod with narrow Bridgestone SO2 tires, they fit over the 993 GT2 four-piston front calipers that clamp 325mm (12.8'') grooved rotors. The rear brakes were converted to larger 288mm (11.3'') rotors with the stock Corrado calipers.

So what has ten years of Sukh-refinement produced? An utterly reliable ride that runs like a rocket, with a magic-carpet ride that sounds like the devil and looks like a wet-dream. Next time you're working on your car, don't be in such a hurry to get it done. Take your time to come up with an enduring machine.

And what does the future hold for Sukh's SLC? "This is as far as the Corrado will go," he told us. "It's up for sale and needs the right home, but it will fund my new TT project, which I've already kicked off with some major wheels." Watch this space!