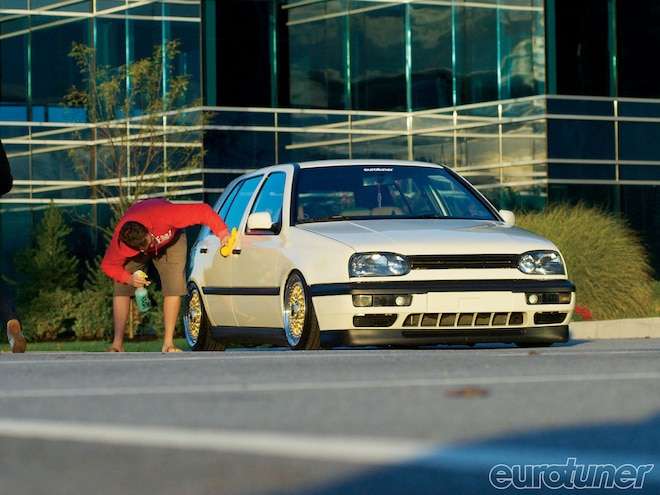 VW Golf
When we first contacted Anthony Noel to get the background on his killa Golf, he couldn't talk because he was coaching his son's soccer team. They won the match and we talked later, but it was an indication of the importance he puts in his family. In fact, he sold his previous Jetta 2.0 (featured in et 3/06) in order to buy a B5.5 Passat Wagon for his growing family. 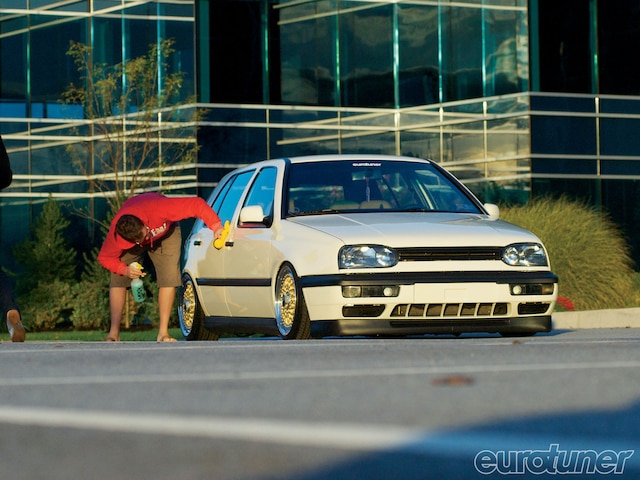 Of course, the 34 year-old Finance Supervisor from Gilbertsville, PA couldn't stay on the wagon for long. After a year, the addiction returned and he convinced his wife that a long term project wouldn't take up too much of his time. The sale of his Jetta had left an itch unscratched. There were things he had wanted to do that never transpired. So a new car would allow him to realize his dreams and build the car it was always supposed to have been.

A clean Mk3 can be hard to find, so Tony looked west for a rust-free example and found a friend of a friend with a bone-stock Californian Golf. Getting it back to Gilbertsville, PA, the long term build gained momentum not long after when the family decided to move house. With the prospect of no garage for a while, he tore into the car, stripping it to a rolling shell in the four weeks before they moved.

This allowed him to dispose of surplus equipment, search for a European Golf CL tailgate and get the car out to Sean Lynch who would do the body- and paintwork.

With everything removed, from the heating box to the dash, carpets and door seals, Anthony paid a visit to his local VW dealer where he ordered a grand's worth of new parts including carpet, seals, new side skirts, door handles and a hood (after the original blew up and smashed the windshield when he was towing it to Sean's).

Without wishing to state the obvious, his goal was "clean 'n simple." Every aspect reflects that philosophy, but none more so than the engine bay. Working from photos as inspiration, the pair removed the heater, A/C and power-steering - replacing it with a manual Mk2 rack. The ECU remained in its stock location but several relays were relocated behind the dash. All the wiring was run down the frame rail by Joe Gaspar to keep it tidy. They even hid the plug wires under the manifold and concealed the coil pack under the lower manifold. They were then able to shave the wire holders from the plastic engine cover to make the disappearance complete.

The alternator, intake pipe, trans mount and rear engine mount were sent out to be black wrinkle powdercoated, while the upper and lower manifolds were color-coded to the body for contrast.

With the engine bay cleaned, Sean then removed all the brackets and filled every hole in the firewall except the throttle cable and steering knuckle. The result is as smooth as a strawberry smoothie and the perfect home for the mildly modified VR6 Joe had on the shelf. It had been cancelled by another customer but was fully rebuilt with a machined head, new lifters, gaskets, piston rings, timing chain, water and oil pump, etc.

To this base, Anthony added a C2 chip for the Eurospec 268° cams, OBX header and Techtonics exhaust. And thanks to the stripped ancillaries, he reports the "lightweight" Golf "moves pretty good."

While in his possession, Sean also deleted the wiper, weld lines and emblem from the rear before pulling the rear fenders. Anthony then added "textured top" Euro bumpers, a de-badged grille, new OEM skirts and a VR6 front lip.

The next stage was paint and, planning a "camel" interior, the owner wanted something to match. Browsing paint swatches, he chose Chrysler's Cool Vanilla to bring an extra touch of class. And contrasted by the black plastic exterior trim, the car looks stunning in person.

The wheel choice was made years earlier when he bought a set of BBS RS for the Jetta. They were never actually fitted, so he sold them, but wouldn't make the same mistake second time around.

He found some more 16" RS online and stripped them to rebuild. He wanted color-matched centers but Sean had done it once before and "vowed never again". So they remained gold. However, the lips, bolts and center nuts were hand-polished by twins Matt and Justin Ivan, who also did the powdercoating on the engine. "I then re-assembled the wheels, but it's a pain in the ass. I never want to do that again," Anthony recalled.

The suspension started out with Koni coilovers, "but I broke two oil pans and air allowed me to adjust the height," he explained. "I wasn't convinced until I rode in a friend's car and saw how easy it was to raise the car and how well it drove."

Newly converted to the air conspiracy, he contacted Open Road Tuning to obtain his BagYard set-up with Bomber front struts and Classics on the rear, with a Viair compressor and five-gallon tank in the trunk.

"The drive to H20 was the farthest I'd driven on air but the ride was better than any coilovers I've owned," he said. "I don't have to worry what's in the road, and when I get to a show I can just dump it!"

Because the car wasn't originally built with air, Anthony now wishes he'd notched the frame to let it sit lower because the axles are resting on the rails "but I'm afraid to do it now because it's all painted and smoothed," he explained.

That just left the interior, which was treated to a Camel leather retrim on the seats and door cards, while the headliner was covered in black suede. The '92 dash was swapped from his older Jetta because it was all-black and had the rounder vents he preferred. "When I sold the car I took it out because I knew I wouldn't find another one easily," Anthony explained.

Beside some other Euro upgrades, the interior features a trio of gauges in the redundant heater control panel, as well as the air ride controller.

Looking at this cream-colored Golf five-door with its classic BBS wheels, shaved bay, lowrider stance, "big block" motor and beige leather interior, it almost has the feel of a classic hotrod. It certainly represents the new American VW movement, combining the best of traditional American techniques with the German Engineering we all love and respect. And that's why Anthony's Golf is one of our favorites from H20i 2010.

'98 Jetta 2.0
We featured Anthony Noel's previous '98 Jetta GT in et 3/06. Its 2.0 8v had a Euro Sport Cool-Flo, Neuspeed P-Chip and 260° cam plus Techtonics exhaust driving the stock four-speed auto. The car sat on H&R coilovers, had ECS rotors and 16x8.5/9" WRD Mesh wheels. To accommodate these, he'd pulled and smoothed the fenders, fitting Vento bumpers and a lip spoiler. It also wore a badgeless grille, Hella Vento headlights and had a smoothed rear-end. The interior was all-black with the same "early" '92 dash and black suede headliner. Throw in some audio components and you can clearly see how the current '97 Golf picked up where this Jetta left off.