This Isn't Any Ordinary Car; Nathan Simmons' M3 Has Flat Paint, A Supercharged V8 Yet Is Daily Driven. 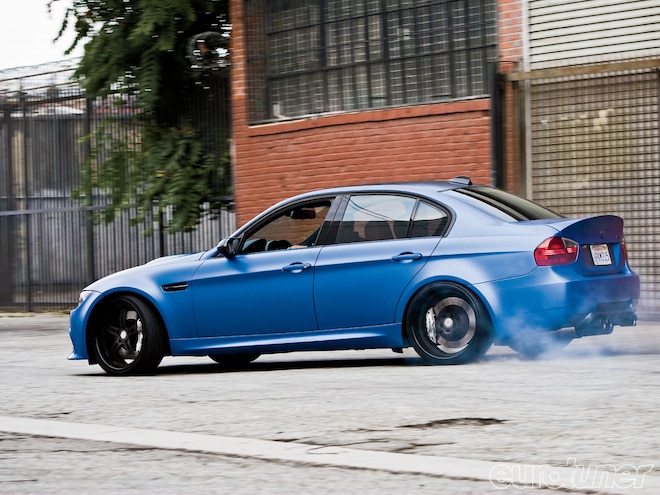 Everybody knows quality paint and bodywork is hard to find. How often do you come across project cars where the paint doesn't match up, or the panels don't align? There are thousands of heartbreaking examples. There's even a good chance a body shop horror story has happened to you or somebody you know at least once. That is, until you finally find that 'go-to' place... 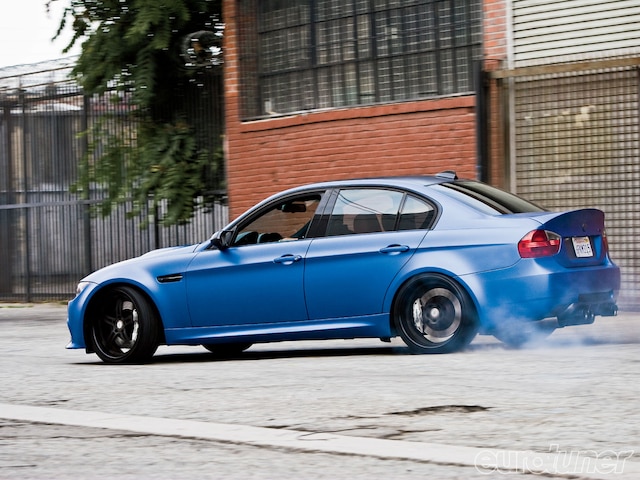 Custom and Classic (C&C) Collision in Pasadena, CA is a company turning people's headaches into dreams. Since '98, partners Nathan Simmons and Rett Comer have been gaining respect in the Euro scene with stunning project cars. We heard about C&C when Jayare Marquez's '05 BMW M3 showed up on the cover of et 3/09. The supercharged E46 had stunning House of Kolor orange paint with Vorsteiner exterior parts. C&C was responsible for that creation and have continued to astonish the BMW community with this new flat blue '08 M3.

The sedan belongs to Nathan, who wasn't originally a diehard VW fanatic. His love for cars began in the air-cooled world, and his first ride was a '69 Karmann Ghia.

Before he opened the business, he painted out of his garage, concentrating on air-cooleds. Eventually, his operation was shut down by the City, so C&C opened its doors for business a few months later.

Today, C&C has a 20,000 sqft facility with 12 employees. At the shop you'll find everything from domestic and Japanese to hotrods, but Euros are a core element, which is where this badass E90 M3 came into the picture. "We originally built the car for a customer," he began. "I knew from day one his wife was pissed off because it was a manual, but he kept modifying it..."

Formerly Alpine white, the car had all the right bolt-ons. Nathan was responsible for fitting the majority of its parts, such as the Brembo brakes, 20" 360Forged carbon-faced wheels, RPI exhaust and H&R springs.

The body was outfitted with Vorsteiner from head to toe, including both bumpers, carbon trunk and replacement carbon roof. "I'm pretty confident I'm the only one with a carbon-roofed sedan with a sunroof," he told us.

The sedan was first showcased at M-Fest 3 in the Wheel Power booth. "Probably half the miles on the car are from taking it to shows, even though it still belonged to the previous owner," he laughed.

But that changed when Nathan lost his daily-driven Dodge Charger in an accident. So he simply inherited the lease of the M3. Nathan took the reins and drew a blueprint for a C&C show car that would also be his new daily.

"I had a customer with another M3. We talked about doing it matte Estoril blue. I got so excited about it but then he changed his plans. But it stuck in my head. Not many colors are true to BMW besides Alpine white and Estoril blue, and it's not available in the E90 four-door," he explained.

Paint was applied two weeks after Nathan took possession of the E90, and to be different he opted for a matte finish. With the body flat, the trim and emblems were similarly touched up in flat grey.

The carbon weave was left exposed on the trunk around the license plate and across the spoiler, as well as on the front spoiler, before the grille and ducts painted matte gray. Finally, the lights were smoked for effect.

"A lot of people overdo their cars. They're way too loud and have too many things on them," he explained. "For example, they want their car orange but have chrome, gloss black, matte black, carbon and silver. My objective was to get it down to three colors. I'm not formally trained in art, but I know from experience that we get overloaded when there are too many different colors and textures. It's more soothing when everything is minimal - Less is more is one of my favorite mottos."

With the exterior in the bag, Nathan turned his attention to the engine. After working on many cars from VF-Engineering over the last two years, it was a no-brainer to seek their expertise for the V8.

While still in pre-production form, VF-Engineering installed its new supercharger kit based on the Vortech V3Si blower. They mated the blower to its chargecooler to keep intake temps cool. The manifold was machined and featured 2.25" runner tubes with radiused velocity stacks. GIAC provided the software and although not dyno-proven to date, the setup is claimed to boost horsepower from the stock factory output of 414hp to a tire-shredding 620hp.

Nathan has no more plans for the car, except to "drive the piss out of it" and bring it to as many local events as he can. He's definitely built one of the more impressive M3 sedans we've seen to date, and we can't wait to see what comes out of the C&C workshops in the future.