We caught up with Dan Martin’s big-turbo, R32-fronted Jetta GLS before the USAF shipped him off to Hungary 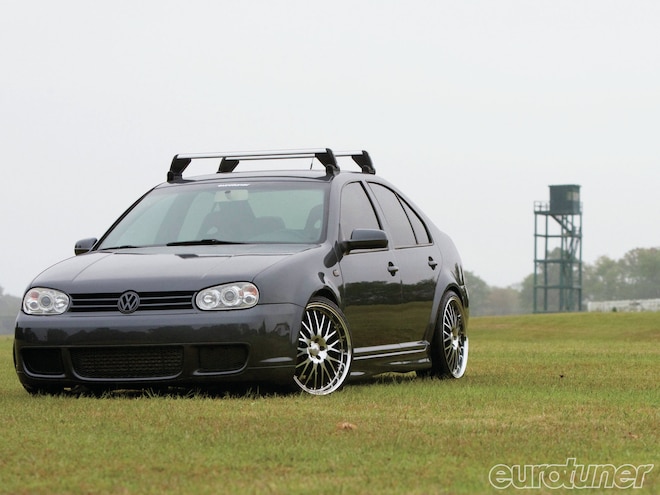 We came across Dan Martin at H20 International last year. We’d been checking out the cool exterior and radical interior on his ’02 Jetta GLS when we got talking. Working for the Air Force, he was being stationed in Europe a month later, so if we wanted to shoot his car it was now or never. 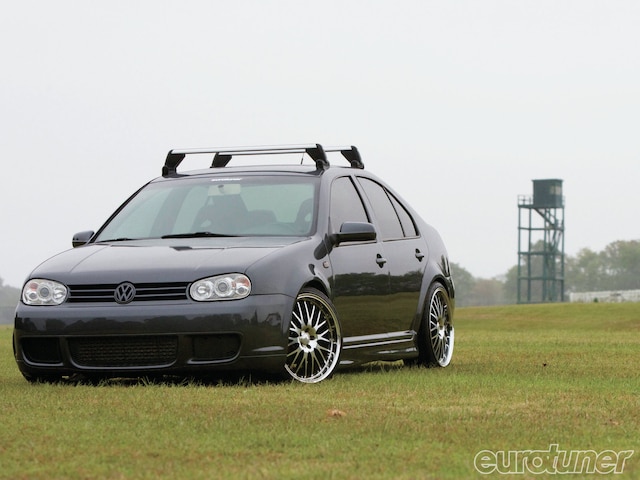 Not able to refuse a man in uniform, Sam braved the light rain to capture these images of the R32-faced big-turbo sedan.

Dan’s Euro history goes back to 2007 when embarrassingly, he owned a ’99 Buick Regal with aftermarket rims and some stereo. I look back at that car now and laugh about how misguided I was, he told us.

That summer, friend Jim Santilli said what only a friend can: your car is crap and it’s time to move on. He introduced me to the Euro scene because I was searching for a car that was a manual, sporty, suitable for mods and something I could learn how to fix, he told us. As an Aircraft Maintenance Officer working with Boeing C-17 Globemaster transport planes, he wasn’t afraid to get his hands dirty.

Having seen the light, Dan found this ’02 VW Jetta GLS. It had the desirable 1.8T engine and, as a bonus, the previous owner had already carried out an R32 front-end conversion, adding a K04 turbo upgrade with Revo stage 2 software.

I hooked up with DelDubs and began showing the car in Spring ’08. My first year was mostly a learning experience. I learned from the judges what made a well-rounded show car. More importantly, I came up with the vision for my car. I also learned that it’s the people and the good times I’ll remember while hanging with the DelDubs crew.

Unfortunately, it wasn’t all plain sailing. The car has brought me great times, but has had a streak of bad luck as well, the owner lamented. The day I purchased the car, I was driving home when a semi-truck tire shredded and ripped off the front bumper, side skirts and damaged the rear bumper. Similar incidents occurred three more times in two years.It made me thankful we had great insurance!

With so much body repair needed, it was inevitable Dan would use the opportunity to get some bodywork done. Mike Snyder at Nocturnal Fabrications in Elkton, MD did the bodywork and repaint, as well as the audio work in the trunk.

His skills extended to shaved side moldings and front markers plus a smoothed rear bumper and molded M3-style side skirts. This amount of bodywork would clearly require a repaint, so Dan chose a darker mix of the stock Atlas grey with more metallic.

Prior to that, Mr Martin had concentrated on the motor. Building on the existing K04 turbo upgrade with Revo software, he added an ESE dual-stage cold-air intake plus a Eurojet front-mount intercooler and turbo inlet pipe. And to dress it up, Mike sprayed the engine cover in a matching grey while the inlet manifold was polished to match the pipework.

While the exterior is Euro-discreet, the same can’t be said of the lush interior, which looked very inviting on our wet shoot. Originally beige, Dan found a black GLI interior on eBay and started the transformation. However, the major change would come when Matt Boller from Tip-Top Trim Shop in Dover, DE covered the Corbeau front seats in diamond-stitched cream vinyl with black alcantara centers. This sporty combination continued to the rear seats and door cards as well as to the trunk floor and lid. They even used the stitched vinyl on the armrest, shift boot and e-brake handle, as well as the sunroof control panel and sub box port.

With Corbeau harnesses fitted and a boost gauge on the steering column, the interior only lacked audio. So this took the form of a 7" Kenwood head unit, Kicker components up front and a boxed 10" Pioneer sub, nicely trimmed and placed on the passenger-side of the trunk. On the other side is a lightweight battery to run the system. It sits in the stock cubby that’s been internally trimmed in the same stitched vinyl.

The biggest hurdle modding the car was the overall cost. It meant I had to find ways to save money, such as using vinyl rather than leather for the seats.I also had to consider it was my daily driver, so I couldn’t have it out of commission for long periods of time. Therefore, I gapped the projects, taking three years to complete the interior, for example, because I was adding one piece at a time, Dan said.

I also talked to lots of companies and negotiated partial sponsorships so I could purchase the mods I wanted.Persistence was the key, and occasionally I got lucky! he laughed.

Although he didn’t do all the work himself, he did what he could. I knew my limitations so, in order to get things perfect, I sometimes had to stand back and let good friends in the VW Community lend a hand, he said.

The sense of community has extended across the sea to his new posting in Hungary, where he’s been surprised by the warm welcome. The response I’ve received from people here has been very positive.There aren’t too many Boras (Jettas) over here, so my car stands out in the small town we’re in. I’ve already made some friends in the VW community here and they appreciate the unique style of my car. I have to thank the guys at eiltevwclub.hu especially. They’ve been so welcoming and even helped translate and coordinate the purchase of a 1979 Golf I bought over here, he said.

Dan’s been excited about the European posting be cause he’s only four hours from Austria and plans to visit Wrthersee. However, he had a final fling in the US before leaving, squeezing in a trip to H20i before shipping the car to Europe a few days later. The timing was tight but it was completely worth it, he beamed. I left H20 with a first place in the Mk4 Jetta Wild category with so many fantastic cars in my class, the win was incredible but humbling. Now that the 26 year-old enthusiast is starting a new journey into the European scene, we’re interested to see how his new Mk1 project turns out with all the influences over there. Perhaps we’ll even have a feature on it when he returns home in a few years.