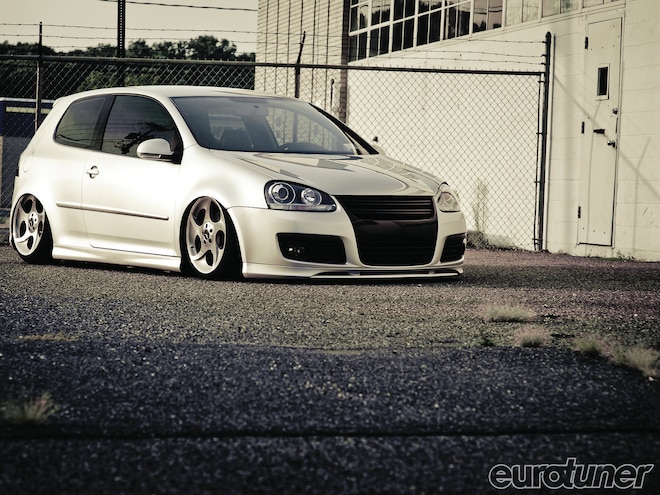 The phrase ‘less is more’ is one of the most overused clichés in the Euro scene. Yet it holds true 99% of the time, especially when it comes to VW styling. Rich Fogarty wasn’t a guy out to build the wildest show car or break a quarter-mile record. Instead, he set out to build a project car with simple intentions – a lowered, wide stanced GTI with OEM+ styling.

During the build he steered away from add-on parts that would grab your attention, concentrating on creating a complete package. The result: an ultra-clean ’07 GTI 2.0T with pulled fenders, Mercedes wheels, air-ride and shaved accents.

Straight out of Long Island, NY, Rich got his start ten years ago when he picked up a mint ’01 GTI VR6 from a dealer. He was hooked on the Mk4 from day one, but then upgraded to a Jazz blue 20AE GTI when they hit US soil. After the sixth year of owning the car, boredom hit. It was time for a new ride…

“When I saw the Mk5 GTI I wasn’t a fan initially, but it grew on me quickly,” Rich started. “Seeing their squat-look when dropped with wheels got my mind racing. Before long, I knew I would have to make the transition.” 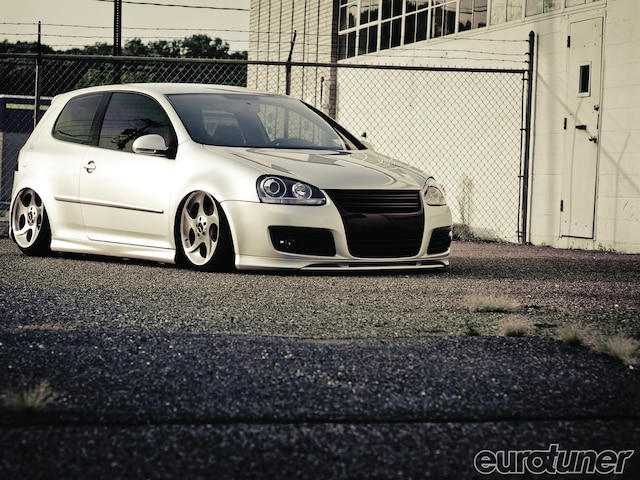 With a new car was on the horizon, Rich was also planning his wedding. To keep costs down, he searched for a pre-owned low-mileage Mk5. “Two weeks before the wedding, I found a gem at an unbelievable price in the classifieds,” he revealed. “The car was completely shaved and slammed on coilovers with beautiful bodywork. To have all that work done would have cost a pretty penny, so I jumped on the deal.”

Eric Shivley from North Carolina was the previous owner of the GTI. Working in a body shop, he did all the exterior work himself, including the shaved front bumper. The front grille was replaced with a badgeless Jetta part. Continuing the clean theme, the hood was shaved and the antenna ditched. On the driver-side door, the keyhole was filled, while the hatch lost its emblem and handle. Before Eric was done, he pulled all four arches to allow the wheels to tuck further inside the fender wells.

Impressed by the craftsmanship, Rich contacted Eric and prayed the Mk5 would still be available after the wedding and honeymoon. “I have to admit that during my two-week honeymoon in Europe, I was secretly on the computer every other day checking on the GTI. Three weeks later, the car was still for sale!

“Now here’s where some people might think I’m crazy because I purchased the car unseen. It was the riskiest thing I’d ever done. But the night Eric delivered the car, I couldn’t have been happier with the decision I made,” he admitted.

One enthusiast passed his project car to another and Rich was on his way to creating his dream GTI.

With the bodywork taken care of, Rich spent the next few months putting his own flair on the project. Starting with wheels, he bought a set of Mercedes Alphards usually found on the SL. After polishing the faces and color-matching the inserts, the staggered 18x8.5" front and 18x9.5" rear rims were mounted with stretched Nitto NeoGen all-season tires.

Next, it was time to get low. “I drove the car slammed on coilovers for a couple of months, but as time went by, I realized how harsh the ride was. With a daily commute of 50 miles to work, I started researching air-ride,” he told us.

After seeking help from mechanic friend Doug Bonfiglio, Rich splurged on Air Lift’s XL Slam Kit. It included everything for the install – front struts, rear dampers, four air bags, compressor and air tank. “Before I knew it, I was laying frame and tucking the Alphards in no time,” he smiled. “The ride was dramatically better than the coilovers, and who doesn’t like the look of a slammed car when you’re driving down the street or parked at a show?”

With the air tank and compressor stowed in the trunk, Rich also added a 10" sub box powered by a Sony amp for more bass. A Pioneer nav deck allowed more control over the audio system as well.

The appearance of the car was complete. But when the 2010 show season hit, Rich added a few more tricks to set his Mk5 apart. For starters, he joined Evolution Euro Militia (EEMilitia) run by Kevin Janovsky, who’s bagged Mk5 GTI appeared in et 3/10. “Kevin had a great attitude and showed how a club can be laidback and fun. Before I knew it, I was meeting with them weekly and attending shows,” he explained.

To up his game, the owner mounted the air-ride controller in the ashtray, since it had to be visible but easily accessible. Chris Rogers at Car Tunes became the go-to guy for the project. He molded the controller into the tray and angled it perfectly.

Rich continued by rebuilding the trunk setup. He spent weeks planning a configuration that hadn’t been tried before and finally decided to utilize two 3-gallon tanks instead of a single, large one. The sub would also be incorporated into the display and Chris Rogers again came to the rescue. He built a false floor, mounted the tanks around a 12" Kenwood sub and hid the compressor. “I wanted everything symmetrical, clean and tight,” he told us.

To finish the project, Rich upgraded the engine software with Revo, giving the 2.0-liter turbo more boost and better throttle response. The engine covers were also painted bronze to give the bay more show appeal, without going overboard.

Rich predicts he’ll have more mods for the new show season, including Katzkin leather upholstery. But for now he’s happy with how it sits. Rich didn’t break the bank building his GTI and demonstrated that ‘less is more’ still holds true for VWs. 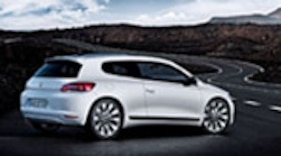 As it sits, the new Volkswagen Scirocco is longer, wider and almost three inches lower than a GTI. Unlike a GTI, the Scirocco has been designed to seat four people, with individual bucket seats in the rear. It'll come with one of three gas engines, the fun ones making 158 and 200 hp. Unfortunately it won't be coming to America.

Read the Volkswagen Tech Letters, brought to you exclusively by the experts at European Car Magazine.