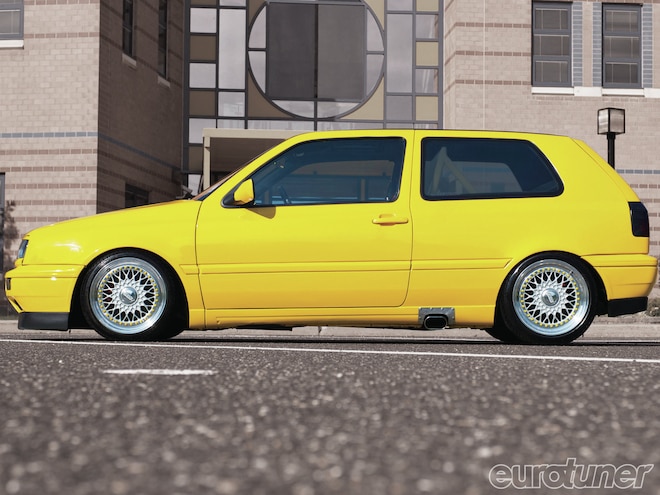 It’s funny how a nickname can stick with you long after it ceases to be relevant. We all change over the years, but those early terms of endearment can be tough to shake. Sometimes it’s good to remember your roots, however, especially when you’ve come a long way. 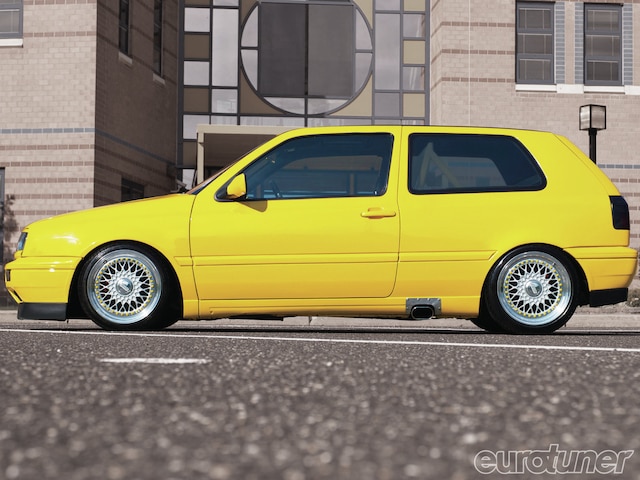 You will notice, for example, the Euro plate in the front of Miguel Vargas’ drop-dead gorgeous GTI VR6 is ‘Hooptie’. Yet it doesn’t matter where you look, the car is brilliantly finished. But, as you can guess from the nickname, it wasn’t always such a looker.

“When I bought the car it looked really hooptie,” the Iselin, NJ, resident told us. “It was stock and several different yellow colors, so I got it repainted and gradually started building it from there. But when I originally bought it, it was my hooptie!”

Miguel was a convert from the hardcore NJ Honda scene, who came around to the idea of owning a VW through his brother, who has a stunning Jazz blue Mk4 GTI (et 1/11). “I got a lot of help from my brother Angel,” Miguel explained. “We just started building the car together.”

Photo 3/11   |   Despite Hooptie tag, FMIC suggests there’s more to this GTI than meets the eye

The first step to eliminate the hooptie status was to address the paint situation. European bumpers replaced the bulkier North American parts, while the front-end was treated to a Jetta conversion with smoked E-code headlights, badgeless grille, eyebrow spoiler and smoked lights. A European VR6 chin spoiler then gave the car a lower, more aggressive look.

The European theme continued to the tailgate, with its wider plate recess plus deleted rear spoiler and wiper.

In turn, the side skirts were deleted and antenna shaved, while Polo door handles gave a different, but factory look.

A fresh coat of the rare Ginster yellow paint looks so good you wonder why VW doesn’t offer any fun hues on its current offerings.

With the project coming together, Miguel’s GTI was dropped closer to the asphalt with a set of Weitec SX coilovers. He then chose classic, do-no-wrong, staggered BBS RS wheels – measuring 16x8" front and 16x9" rear, with H&R adapters converting the wheels’ 5x114.3 bolt pattern to the 5x100 used by the Mk3 VR6. Fitted with Falken ZE-512 tires, Ginster yellow bolts provided a ’90s feel.

When asked about his theme for the car, Miguel simply said: “Clean with nothing too crazy; I just like going fast.” Yet “crazy” might be an appropriate term for the turbo motor, which was built by Azevedo Motorsports in Linden, NJ. Regular readers are undoubtedly familiar with Azevedo’s work, since we’ve featured their builds a number of times.

The stock-block VR6 had the compression dropped with a C2 Motorsports head gasket spacer in preparation for the huge GT40R turbo hung off the back of the head. A Lugtronic standalone plug-n-play ECU handles the fuel supplied by a Walbro pump through an Aeromotive pressure regulator to a Schimmel rail and 600cc C2 injectors.

Once the GT40R has increased the intake pressure to 10psi, the boosted air passes through a front-mount intercooler and Schimmel short-runner intake manifold, before exiting from a 3" downpipe and exhaust that terminates in a side-pipe in front of the rear wheel.

As it stands, the car makes around 400whp on pump fuel. “The sound is amazing, I love the noise a VR6 makes,” Miguel added. In reference to the side-pipe he told us: “It was for the look, but it sounds great, too!”

Miguel’s old Honda buddies had been critical of his switch to VW, but the turbo power put an end to that. “They ragged on me a little bit,” he told us. “They said I’ll never be able to build a VW as fast as a Honda, but I think I pretty much did…”

The stock five-speed transmission was beefed-up with a Peloquin LSD and a Clutch Masters stage 5 clutch, both of which help put the power down.

Finally, engine and transmission parts were painted, while other items were polished or chromed to finish the underhood changes.

Despite being a self-professed horsepower junky, Miguel claimed one of his favorite parts of the build was the interior, and after peeking inside it’s not hard to see why…

A quartet of Auto Meter gauges were installed in the dash, ensuring the boosted VR6 is closely monitored. Oil and water temp, plus boost and an AEM wideband gauge ensure everything is covered.

Suede also covers the A-, B- and C-pillars, plus the headliner. It was fitted by Emir Ramos at Hy-Tuned in Linden, NJ, who also did the audio system. Pioneer was the company of choice for the equipment, including an AVH-P5100 DVD touchscreen head unit, amps, components and the 12" Premier sub in the trunk. The amps were flushed into the side panels and a chromed extinguisher sits alongside the sub.

The transformation from bone-stock ‘hooptie’ to high-power show car took about a year, and as you’d expect, Miguel is thrilled with the results. “I drive it all the time,” he enthused.

Keep it in the Family
Earlier this year (et 1/11) we featured a Mk4 GTI belonging to Angel Vargas, Miguel’s brother. The ’03 GTI 1.8T was chosen as one of our “Best of H20” because the quality really stands out.

From its böser hood to the smoothed tailgate, it oozes class. The car sits on 18" CCW wheels and D2 air suspension. With a slick interior, polished roll-bar and tidy audio system, Angel has created one of the best 20AE cars in the country. Although you won’t see it in this photo, which was taken last year, Angel was busy over the winter. In fact, he’s gone widebody over 18x9/11" Rotiform BLQ Concave wheels and finished shaving the bay. He then resprayed the car, painting the block and trans in the process. With Sparco seats inside and two more video screens, the only thing he didn’t get around to was a right-hand drive conversion because the parts weren’t available!