We look at one man’s quest to achieve the perfect look and stance for his ’93 VW Golf VR6. 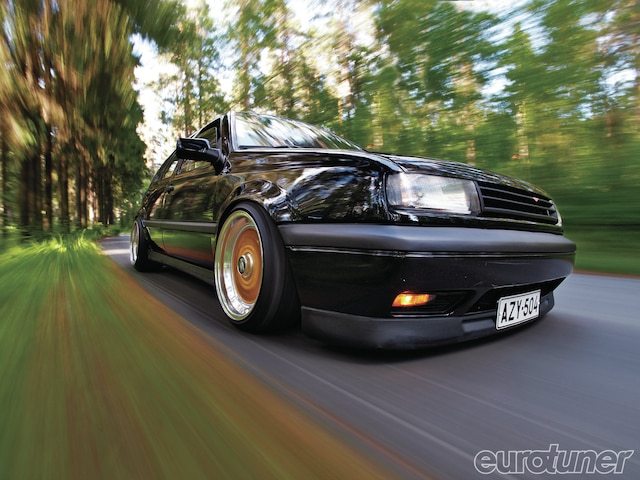 In our eternal quest to bring you the finest Euros from around the world, we’ve been looking in depth at the Scandinavian countries, marveling either at their ludicrous engine swaps or simply the ability to operate hand tools in freezing temperatures.

In this issue, we’ve been talking to Juho Jääskeläinen from the frozen wastelands of Finland. Well, that’s how we like to imagine the city of Kuopio, anyway!

In common with every Euro enthusiast around the world, the cars are in his blood. In this case, Juho has been a VW/Audi fan all his life. His previous rides have included a Mk4 Golf TDI, Audi Coupe quattro and A4 1.8T quattro.

After a string of four-cylinder models, he desired a six and sought out this stock ’93 Golf VR6 in mid-’07 (it wasn’t called a GTI in Europe). Apparently, the previous owner had fitted 17" Azev wheels, but “the 8-inch fender gap just made it look more stupid!” he told us.

Inevitably, his first task was to rectify the stance with FormelK coilovers. However, this drew attention to the terrible condition of the Azevs. So he then shopped around to find a set of 16x9" DBV Cup wheels (ET30), which he wrapped in 215/40 tires.

We all know that the problem with tuning a car is you can often spend time and money chasing one problem after another. In this instance, the deep offset wheels caused the front rims to rub on the spring perches. The solution was to fit wheel spacers, but this then gave the car 1" poke, making it rub on the stock plastic fender flares.

“After a few beers, I ripped off the VR flares and made some space in the arches the traditional way,” Juho explained. This involved “cutting, sheetmetal, welding, lead filler and a big hammer!” He basically cut slits into each fender to alter the radius and gained more width with new metal.

“When I rebuilt the arches, I also shaved the bumpers and tailgate. I then rebuilt the license plate aperture to better fit the plate,” he continued. The latter involved cutting out the plate recess and narrowing it for his smaller Finnish plate. He then welded new metal into the hatch to graft his new frame seamlessly into place.

After fabricating his own böser blick hood, the car was sent for several coats of Maybach black paint. At the same time, he found leather König front seats and an OEM leather rear seat to upgrade the interior to match the new look.

With the legendary long winters in Finland, he decided it was time to rebuild the VR6 motor with new bearings, gaskets, piston rings, etc. For performance, it got a ported cylinder head, stainless steel exhaust manifold and full system.

But with the engine running like new, he now found himself surrounded by other GTIs with böser hoods and shaved bumpers. Not wanting to look like everybody else, he discovered a new motivation for himself in a set of BBS RS wheels.

The 16x8" 009 fronts and 16x10" 058 rears had an et11 offset and 5x112 stud pattern because they were originally from a Mercedes-Benz. However, he rose to the challenge of rebuilding them himself, polishing the outer rims and painting the centers in a gold he found on a Porsche paint swatch.

The new wheels encouraged our man to have another go at the exterior. Since a Jetta front-end conversion was rare in his part of the world, Juho sold his Golf front-end and bought two early Vento (European Mk3 Jetta) grilles and new headlights. He then set to work converting the car, building another böser hood from his original Golf panel. However, he extended the character lines from the center of the hood all the way to the end, and welded tiny triangles over the headlamps, to finally get the sleepy-böser look he wanted.

With his two Vento grilles, he removed the badge from one and used parts from the other to create his own homemade badgeless grille.

He decided to buy new side moldings, having removed them earlier. These were refitted and he placed Mk2 Golf side repeaters into the moldings behind the front wheels.

The Finn then bought a new tailgate and transferred his narrowed license plate recess into it. However, this time Juho left the plastic handle and light molding in place, albeit narrowed to fit.

The next task was to fabricate böser-style tail lights. He did this by cutting off the upper lenses that formed the indicator sections. The plastic was replaced with sheet metal sections welded to the tailgate to get the “böser” look. When the hatch is lowered, the new metal sits over the lights as intended.

Undoing more of his earlier work, Juho decided the profile of the wider rear arches were too sharp, so he made new ones (again in metal) but this time looking more stock.

He also hated the smoothed bumpers he’d built, so went out and bought two rears plus another front bumper. The idea was to create something new that was still smooth but looked more OEM+.

Up front, Juho added the center section from one of the rear bumpers, thereby eradicating the large auxiliary lighting units. He was able to position Mk2 Golf indicators in the brake ducts to create a unique look.

In the rear, he eradicated the bumper’s exhaust cut-out and fitted turn-down tailpipes.

After so much bodywork, the car needed painting again, so this time he returned to the VAG paint book and chose LC9Z – what he describes as “the darkest black!”

A few weeks after the car was completed, he took a roadtrip to Bug Run in Sweden, where the car picked up the “Best Mk3” trophy. It also won a couple of awards at local shows, vindicating his hard work.

Taking four years to build the project, Juho recently sold the VR6 but ensured it went to another VAG enthusiast who would similarly cherish it and add more upgrades in the future. “Now I need to to find a new project,” he told us. “One thing’s for sure, it’s going to be VAG, will be low, 4WD and rollin’ on splits. Maybe I might make a few tiny mods!” he laughed. 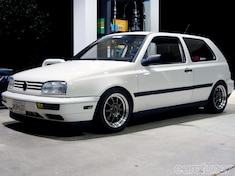