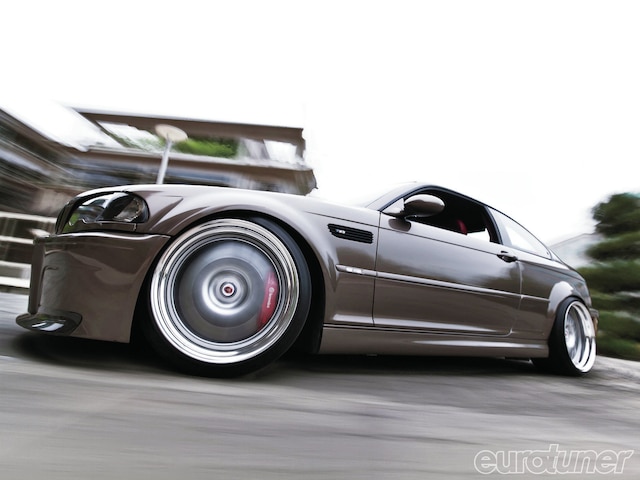 A color change is one of the most dramatic ways to modify your car, whether it’s with paint or a vinyl wrap. With the interesting color palette available for the E46 M3, not many owners bother to do this; but when they do, it tends to be in the brighter spectrum. We’ve certainly never come across a color change as understated as Jonathan Macias ’01 M3.

A child care provider at University of California Davis, he’s been toying with paint, different parts and even changed the wheels nine times over the past three years. In fact, six months into owning the M3, the carbon black exterior was painted Alpine white. And almost before the paint had a chance to dry, TNT Auto Body in Sacramento, CA, had it back in the paint booth. This time the M3 received a fresh coat of Sepang bronze.

While his paint choices were quick, Jon initially had a tough time deciding which direction he wanted to go — an aggressive track car or a clean show stance. His project took many different directions before it became what you see here, and we should thank both his Euro car-tuning friends, without whom he’d still be wrenching on Hondas and Subarus, as well as Europrojektz car club for its final outcome.

Throughout the process, he changed the front-end five times, making it more restrained at each stage. The current Vorsteiner VRS carbon fiber hood, for example, replaced a previous VRS hood with larger vents. However, the smaller vents on this part were more to his liking. Similarly, he switched to Vorsteiner’s CSL front bumper but had the company shave the round intake hole on the driver’s side for a cleaner look. While the one-piece carbon splitter retained some racing flare.

The front was further accented with yellow-painted high-beam reflectors, positioned next to Depo smoked corners. Carbon BMW roundels as well as matte-black kidney and fender grilles were also included.

The rear received a GTR bumper with a carbon Delsa CSL-style diffuser. The Seibon CSL-style trunk was painted but the carbon weave was exposed along its edge.

The tail lights were then switched for Eagle Eye smoked LED units, and a matte black M3 logo added a personal touch.

Throughout the process, the wheels evolved continually. He danced between BBS LM, iForged Rev, SSR SP1, Works VSXX and HRE 540 before committing to a year-long relationship with this set of HRE 546 six-spokes.

Up front, he fitted wide 19x10" wheels with stretched 235/55 tires. However, the rears were even bigger, with 19x11.5s built using deep-dish outer barrels sourced from Germany. They were wrapped in 265/30 tires that also barely fit.

Peeking behind the wheels are four-piston Brembo front calipers with 380mm drilled rotors, while TriNet Motorsport drilled discs were added to the rear.

The stance was also fettled throughout Jon’s quest for the perfect wheels. The car originally came with H&R springs but these were later switched for adjustable Bilstein PSS10 coilovers.

With the ride height dialed, Jon swapped the interior himself, selling his cracked black leather seats and replacing them with ’05 Imola red leather seats. He also installed a Pioneer head unit, Pyramid amp and 12" MTX sub in the trunk. Jon then wrapped the pillars in suede and the trim-pieces in carbon-look vinyl. A ZHP shift knob, alcantara shift boot and AC Schnitzer pedals were the finishing touches.

The only thing missing was the growl of the E46 engine. So the owner specified an ECS Tuning filter plus a Maxspeed-Motorsports exhaust with Rogue Engineering rasp pipe and X-pipe.

Although the motor mods are relatively tame, Jon hopes to have a stage two supercharger in the future. He’s also considering a custom interior with diamond-stitched race seats to make his M3 even more unique.