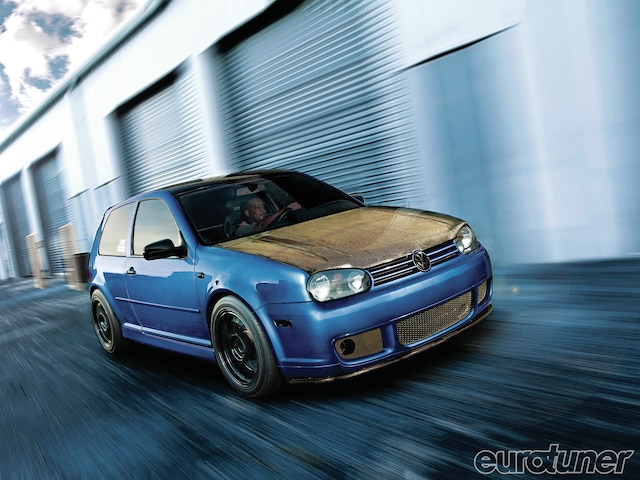 Why do we do what we do? Not to get too philosophical here, but it’s a perfectly legitimate question. Perhaps more so when you consider what we do to our cars. Aside from the odd junkyard-save, we often take perfectly fine automobiles and doing unspeakable things to them.

But we can’t help it. It’s like asking a bird not to fly or a fish not to swim. Some people are simply compelled to do certain things.

It goes without saying that what Adrian Gordon did to his ’04 Golf R32 was totally unavoidable from the start. “I graduated high school in ’96 and pretty much started building cars,” he began.

Growing up in NYC around family and friends with modified cars, he cut his teeth on a ’84 Rabbit GTI. Now relocated to Sarasota, FL, he’s built this VW R32 for one thing only: speed.

No concessions were made for style, no nod to the scene, just performance on the street and dragstrip. “I mainly do drag racing,” Adrian confirmed.

One of the prerequisites of going fast is horsepower and, as the demo car for Adrian’s shop Innovative Racing Concepts, the R32 had to deliver.

After a brief stint at Fifteen52, he opened the shop and set about making the Golf represent the work his crew is capable of. It was also Adrian’s daily driver, so had to be reliable as well.

The R32 is no stranger to high-power applications. As one of VW’s most capable chassis in recent memory, the all-wheel drive 3.2L VR6 24v just begs for a turbo. So Adrian duly obliged and fitted a Precision 6765 billet blower, regulated by a 46mm wastegate and HKS EVC5 boost controller.

The pressurized air has a short distance to travel before being chilled by an Innovative Racing Concepts (IRC) air-to-water intercooler. It then passes through a 90mm Accufab throttle body and IRC short-runner intake manifold before being ingested by the VR6.

The engine retained the stock internals, but the compression was lowered with a stainless head spacer. Electronically, everything was binned, so a Wolf 3D stand-alone management system from AEM replaced the Bosch ECU, telling the MSD DIS 4Plus digital ignition and 1000cc Precision injectors precisely what to do.

AWHP
As you’d expect, this added up to a potent package. In race trim, Adrian dials in about 24psi for a solid 631hp to all four wheels. Even more impressive, when running lower-octane fuel at 15psi on the street, the motor still cranks out 527awhp.

Adrian is, to say the least, enthusiastic when describing the power delivery, “Oh man, wow! Spooling is pretty quick, right around 3900rpm. In fact, I’m over 330hp at 3800rpm.”

Adrian credits his brother Mark at NMK Tuning in NY for the power delivery. But channeling all that power to the ground is a Spec twin-disc clutch on a stock 02M six-speed gearbox, including the differential. “It’s been holding up,” Adrian said. “I haven’t broken a gear set yet. Knock on wood.”

An IRC transmission mount prevents excessive drivetrain movement under power, while an IRC billet transfer case and rear diff brackets are key to the car’s reliability. “We have test and tune sessions at the track every Thursday night,” he said. “And up until last summer, it was out there damn-near three times a month, every month.”

One of the more remarkable aspects of Adrian’s R32 is the adaptation of the Haldex AWD system to the Wolf stand-alone, since the Haldex doesn’t typical function correctly when the factory ECU is removed. “It’s the factory Haldex controller with a power switch, and I modified the box itself,” he explained. “It gives you the ability to lock the front or rear on the fly.”

When we say the car was built for speed, we don’t mean it just has power. To be fast, you need to move the power to the ground. This is done first by Koni FSD dampers and Eibach Pro springs plus 22mm and 25mm Neuspeed sway bars.

The suspension allows the 205/40 MT drag radials on 17x8.5" Rays Engineering Gram Lite wheels do their magic on the track. Street duty is handled by 235/40 Continental ProContact tires with 18x8.5" SSR Comps wheels.

Those Mickey Thompsons clearly work: his best 60ft time to date is a scorching 1.57 sec. For those uninitiated in the ways of the quarter mile, that’s a strong time.

As a keen drag racer, the last thing to do was reduce weight. So the stock seats were ditched for Corbeau buckets and a carbon fiber hood replaces the heavy steel. The stock wiring harness was also ditched, resulting in a significant improvement. “I rewired the entire car to lose about 100 lb,” Adrian told us.

As for styling, a carbon Audi RS4 front splitter sits under the front bumper, various lights have been smoked, and both VW roundels were painted black. “I’ve always liked the factory look,” Adrian explained. “I painted the roof black to match the hood, and plan a carbon tailgate as well. It’s definitely lightened the car since I’ve got it down to 3000 lb with me in it.” Even the fuel tank is gone, replaced by a 15-gallon cell. However, one area that hasn’t seen any work is the brakes: “I’m upgrading them but I never really drive the car at its 631hp on the street. Yet even at 15psi, stopping can be scary if you don’t have the room,” he laughed.

The fruit of Adrian’s labor is a best quarter mile time of 10.61sec at 133mph. With its stock look, it’s an ideal car to sneak under the radar. “It’s caught lots of guys off guard. People underestimate it because of its factory appearance,” he explained.

However, the car has seen its share of victories, “Supras, Gallardos, Murcielagos, you name it. I’ve got lots of kill stories!” Adrian enthused.

After serving as his daily driver for so long, the R32 is off the road for upgrades to the suspension, brakes, engine and transmission. It seems the call of the quarter mile isn’t enough and Adrian has his eye on some time attack events…

Innovative Racing Concepts also has other builds nearing completion, including a Corrado, Mk3 GTI and single-turbo S4, all with big turbos and plenty of power. Hopefully we’ll be able to bring you updates as they’re completed.