If you’ve been contemplating a Golf TDI, check out Bernie Chacon’s Project MK6 for inspiration. 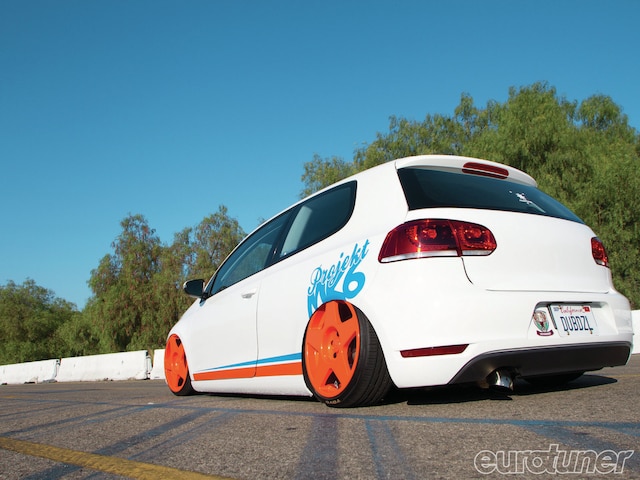 The idea was to have a car club website and debut it at the New Dimensions show in NorCal with his Mk4 Golf and his brother’s Mk4 Jetta – they’d swapped front-ends and badges, spelling JTI and Getta.

The swaps changed the direction of the site to become a how-to tutorial with user-submitted rides. The swap was ahead of its time and propelled the site to what it is today.

Having worked his way through several projects, Bernie found himself in-between cars last year and decided to find something that could handle his 100-mile daily commute. Naturally, he left the dealer in the last two-door TDI on the lot.

“I told my wife I wasn’t going to do any bodywork until next year. This is my daily and I’m not going to go crazy with it.” Bernie asserted. “But, I wanted to bring my TDI to Oktoberfest…” and that’s when Bernie opened Pandora’s box.

After the car appeared with a few modifications, Sean Ramage at Empire Fabrications in Simi Valley, CA shaved the hood notch with two pieces of metal. Carefully TIG-welding each piece into place, Sean would hammer and dolly them for a better fit.

Bernie complemented the work by installing a de-badged Golf grille, adding chrome accents in vinyl to make the front-end similar to the European GTD.

Moving to the rear, the VW roundel was shaved from the hatch to create a smooth, badgeless rear with the wiper deleted. The hatch strut brackets were then flipped 180˚ to make the keyless hatch raise automatically when the unlock button was hit.

Bernie wanted the car lower than his coilovers would allow, so he installed an Air Lift Slam XL kit. Teaming up with local enthusiasts who wanted to learn the intricacies of installing air suspension, they each took a different role. Austin Volpe and Ricky Deng, for example, installed the XL front struts and the management system. While Nikolay Papoban helped with the air lines, connecting them to the five-gallon tank, Rich Chronister wired the whole system. Bernie then built a false floor from MDF to hide the relays and solenoids.

Extra care was taken installing the rear bags. Sean Ramage removed the lower control arms to eliminate the nipple on the arm. He then removed the metal supports on top and refitted 0.25" supports to give the bags more room to operate.

Because the car would enjoy a low life, Bernie added a Neuspeed upper rear tie-bar, Stern lower subframe brace plus Euro Sport Accessories upper and lower stress bars. “When you lower the car, these reinforce the struts and distribute the stress. With air-ride, I can do three-wheel motion and the bars stiffen the chassis to deal with it,” Bernie explained.

Tucking under the fenders is the first set of orange fifteen52 Tarmac wheels in a stout 18x8.5" dimension. The retro-styled motorsport design gives the car a stocky appearance,. Bernie went the extra mile by visiting a SoCal hot rod shop to find color-matched wheel weights and 90˚ valve stems with spade caps.

The new wheels were secured over slotted AR Sport II rotors from Adam’s Rotors. There’s no need for a big brake kit yet: “With a TDI, there aren’t a whole lot of mods you can do right now,” Bernie said. However, good friend Aaron Neumann provided a Neuspeed P-Chip, P-Flo intake and power pulley upgrades to coax more performance from the oil-burner.

The final mod was a Borla exhaust with 4" turndown tip, which gives a pronounced rumble to the four-cylinder motor.

This isn’t the last we’ve seen of Bernie’s Project Mk6. There will be a second installment when his plans come together next year. This will involve a rear valance to incorporate a hitch for his custom trailer as well as a new trunk build and repainted wheels. Stay tuned for an update.