Matthew Balls tucked a 1641cc air-cooled engine in the trunk of HIS ’92 VW Golf. 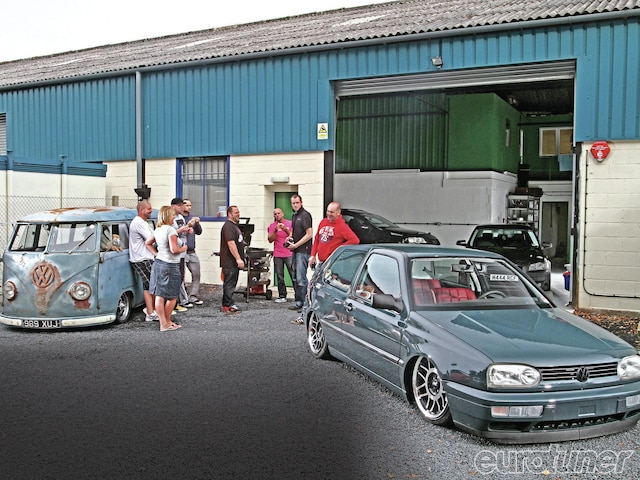 Matthew Balls figured if VW had kept building air-cooled cars, this is how they would’ve done it…

He’s a huge VW fan and has always owned them; in fact, he told us the best car he ever owned was a ’72 Beetle he worked on with his dad. Years later he became Workshop Manager at Type 3 Detectives in Cambridgeshire, England, where he and shop owner Paul Medhurst shave-n-slam pre-70s VW Buses.

In search of a modern-day VW that could be converted to an air-cooled set-up, Matthew stumbled upon an unlikely candidate. The Mk3 Golf they chose was under another car in a local junkyard.

With its dented roof and all, the Mk3 went under the knife. Matthew removed the transmission tunnel and cut out the rear floor. He then removed the body from a Type 3 chassis, leaving the frame head, tunnel and engine supports.

The Mk3 shell went up on blocks to help Matthew align the Type 3 running gear under it. The rear was set first, using adjustable rear spring plates on the torsion beam, paired with Bugpack lower struts to get the right amount of tuck.

Up front, the floorpan needed extending 4.5" to fit the wheels in the Mk3 fenders properly. This was achieved by swapping the Type 3 frame head for a newer Beetle part to gain the additional length.

A narrower ball-joint front beam from CB Performance was then added, complete with drop spindles and Bugpack lowered shocks.

Matthew started the project three weeks before the Volkswagen Players 4.0 show, working most nights and weekends on his own time. With little done to address the engine in the back, they decided to take the Mk3 to the show anyway, along with a few other Type 3 Detective cars.

“We flipped everything on its head at the Players show,” Matthew laughed. “It had the Type 3 steering coming through the bulkhead, two seats, and you could see the engine and gearbox through the windows. As we drove it in, people started following us!”

Surprised by the car’s reception, he was more amazed to receive the “Car of the Show” award among four other trophies that day, especially since it wasn’t even entered in the main show.

After returning to the T3D workshop, Matt used his spare time to finalize the transformation: the dented roof was replaced, while the antenna and gas filler were shaved.

The front bulkhead and luggage compartment were then fabricated after the air-cooled family, giving the car a timeless feel. A spare 18” Snowflake wheel from fifteen52 went in the front along with the gas tank. Below it, a Beetle steering box with a custom rod and U-joints were mated to the Golf’s steering wheel.

With the front-end finished, Matthew constructed a new floor behind the front seats to mount a bench seat. This also combined new wheel wells and a dual-purpose firewall that scoops air from below to the rear of the air-cooled engine.

He then sealed off the engine bay from the cabin with a custom-made lid that was hinged on BMW E36 hood struts. The lid comes flush to the top of the rear seats and has a factory rear shelf to keep the interior looking relatively stock. 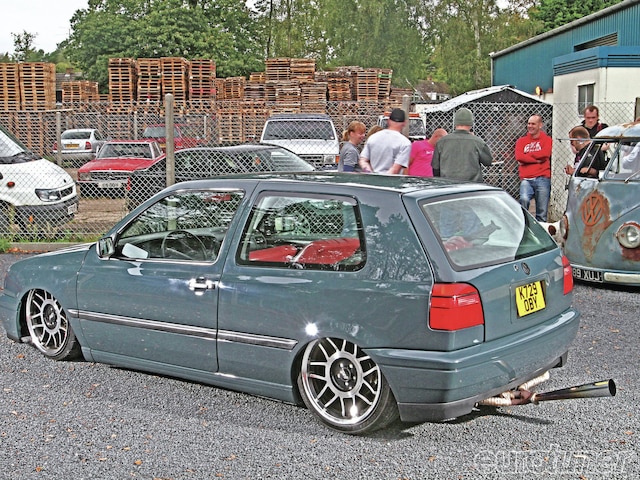 With only one week until Players 5.0, the Golf and its new skeleton was sent to Iain Strachan at iKustoms in Northamptonshire to be painted Audi TT Nimbus gray. When it left the booth, the color was a tad darker than originally imagined, but Matthew liked how it turned out.

With the Mk3 reassembled, a 1641cc air-cooled engine was built with lightened pistons and rods plus a Engle 110 cam fed by dual Weber 40 IDF carb. Once it slid into the trunk, a Stinger exhaust tip rifled below the rear bumper.

The throttle was controlled by a linkage designed by Andy Mariot, connected to a Beetle pedal assembly.

Ian “The Stitch” from P&M Taylor then re-trimmed the front and rear seats plus door cards in red vinyl, using a “fat biscuit” pattern for the stitching and removing the headrests for a retro feel.

As we alluded to earlier, the Golf has 18" fifteen52 RML Snowflake wheels all round. These are 8.5" wide and bolted to late-model Beetle disc brakes up front. The rear drums, meanwhile, were drilled to the 5x100mm bolt pattern to accept the same size rear wheels.

“The Golf drives like a lowered Beetle, and looks even better than one!” Matthew smiled as he proudly gazed upon his unique creation that combines some of the most iconic VW engineering ever produced. And after seeing lots of Beetles with modern water-cooled engine upgrades, it’s great to finally see a Golf with VW’s traditional air-cooled power.