You might not have heard of Arkym, but these carbon fiber-kitted, supercharged BMW M3s mean you shouldn’t forget them in a hurry. 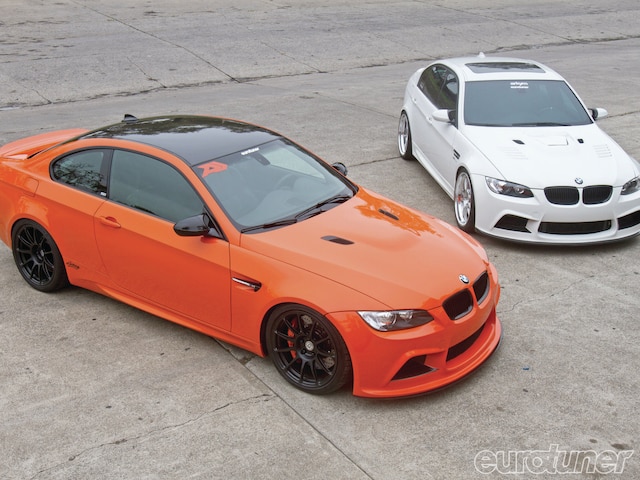 You might not have heard of Arkym before, but that’s because it only recently came out from the shadows of top-secret private-label production runs. For the past 15 years, Kevin Kade at Arkym has built many products for other companies, but finally decided to create designs of his own. So two years ago he began with the E9X BMW M3, designing sleek styling while also looking to increase the V8’s performance.

Needing a development car, Kevin picked up a brand-new Alpine white E90 sedan from the dealer and drove it straight to the Arkym shop. Removing the hood, bumpers and trunk, his team input the measurement data into CAD software to begin the design process. The program allowed them to experiment with the geometry of each piece and analyze airflow characteristics.

The CAD designs were then used as a template for 3D modeling using clay, styrofoam, bondo and a laundry list of products to conform to the original metal parts. The lower vents in the front bumper, for example, were molded to form an aggressive slant, while the bumpers themselves were made slightly wider to give the car more mass. The original hood was cut to create a vent layout, the side skirts where squared off and a new spoiler fashioned for the trunk.

The clay-splattered parts became plugs to create molds for the carbon fiber production parts. And while the molds were being fabricated, the stripped M3 was shipped to Pyspeed in San Jose, CA for performance upgrades that would emulate the new styling.

Pyspeed’s team of techs then installed the Vortech V3Si supercharger that’s part of Arkym’s VT2-575 liquid-cooled supercharger system. Pulling air through a new intake system, it passes through the chargecooler into a distinctive-looking Arkym carbon/kevlar plenum. The E90’s growl was then enhanced with an Akrapovic titanium exhaust.

To handle the additional power, the M3 was fitted with 380mm front and 365mm rear drilled Brembo rotors with six-piston calipers at all four corner. And with KW Variant 3 coilovers installed, a set of staggered 20” ADV.1 TrakFunction wheels were positioned under the fenders.

The E90 was next shipped to Roman Zepeda at ESS Tuning in Chandler, AZ to have the M3 Performance Package software installed to upgrade the traction control along with new DCT software.

The stripped-down but fully-loaded E90 was finally returned to Arkym’s headquarters for the final fitment. The new carbon hood, front bumper with splitter, side skirts, trunk and lower diffuser were less than half the weight of the parts they replaced. 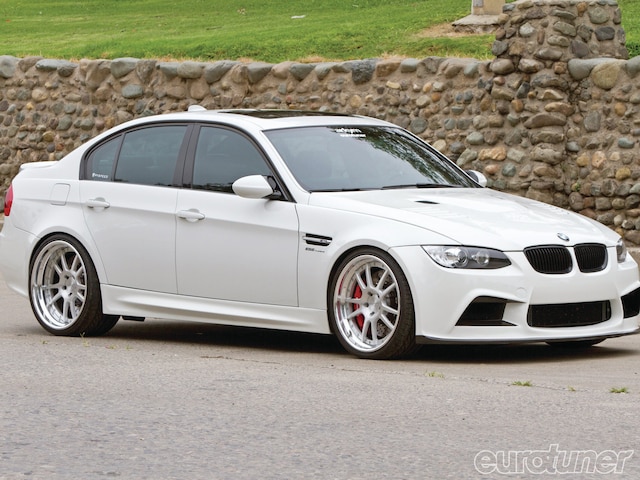 During the ten-month development, Kevin Kade also wanted to develop carbon parts for the E92 M3 Coupe. For this he located one of the first Fire orange M3s in the country and again teamed up with Pyspeed’s owner Eric Yang to further develop the supercharger kits.

They planned to début both projects together at Bimmerfest 2011 but the show was only three weeks away. So Eric flew down to Arkym and mirrored the original E90 build by adding KW Clubsport coilovers plus six-piston Brembo brakes behind 19” HRE P43 wheels.

As this was going on, Arkym’s team fitted the now off-the-shelf lightweight carbon front bumper with splitter, trunk and lower diffuser that had been painted the factory Fire orange by Santini Paint & Bodyshop in Westminster, CA.

With only one week until the big show, the E92 two-door arrived at ESS Tuning, where it was fitted with a prototype supercharger kit, software and revised DCT programming. The kit would subsequently become the Arkym VT-650 liquid-intercooled supercharger system, using the same Vortech V3Si supercharger and uni-belt drive system, but it has a smaller pulley to increase boost. It again used an Arkym intake manifold with internal velocity stacks, Maxflow Race bypass and larger Bosch injectors.

On the dyno, the set-up delivered 604hp with 386 lb-ft before it had to take the six-hour journey to Pasadena, CA for Bimmerfest, where it met up with the E90.

After the show, the E92 bounced around enjoying several photo shoots, while the E90 was taken to Spring Mountain Motorsport Ranch for a test day alongside several exotics. Piloted by Betim Berisha from bbi Autosport in Huntington Beach, CA, he was able to overhaul a handful of cars on the track. To see the two cars perform on the track and dyno, check out arkym.com 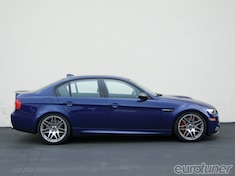 Check out the Project M3 Makeover Part 8 with MFest around the corner and Bimmerfest a short way off, we decided to make more visual and performance enhancing mods to the M3 in order to have something new too look at. - Eurotuner Magazine 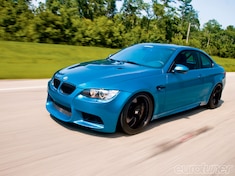 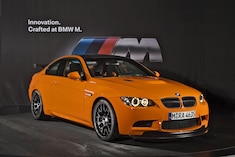 Check out the 2010 BMW M3 GTS that will features a 4.4 Liter V8 engine that will produce 450hp, M double-clutch gearbox with Drivelogic, and more. -Eurotuner Magazine