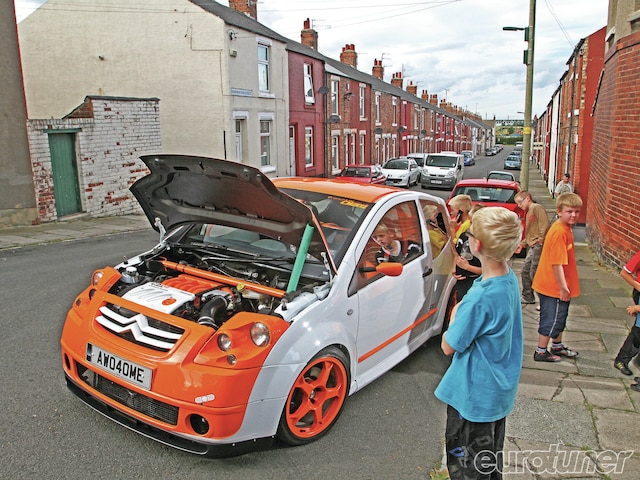 Picture this: you’re working under your car late at night, welding away and smiling at the prospect of wowing the crowds at next year’s shows. Then a spark from your welding rod ignites an oily rag on the floor, and within seconds you’re engulfed in flames...

That’s exactly what happened to Gary Stone, when a freak accident brought his dreams crashing around his ears. Literally. “I was so close to calling it a day,” Gary winced. “I wanted to forget about building cars altogether. But I’d already bought my tickets to the French Car Show and my fiancée Sam insisted we still go. I’m glad I did, because the support was overwhelming and I came away determined to create an even better twin-engined C2.”

Before we continue, we should perhaps backtrack slightly. Gary lives in Middlesborough, England, and the French Car Show takes place at Rockingham Motor Speedway in the same country. It’s a celebration of all the Renault, Citroën and Peugeot motor cars (among others) that have such a strong following among a loyal band of Brits.

Gary’s weapon of choice is the Citroën C2 – a French supermini that boasts decent performance from its lightweight construction, plenty of Gallic style, a cheap purchase price and affordable insurance. All this makes them very popular among younger European drivers looking for a little flair.

Photo 3/10   |   Shifter operates both transmissions, upright e-brake is alongside it plus brake bias knob

As luck would have it, following the fire, Gary already had a spare car tucked away. It was going to be the basis of the next project but got moved up: “It was a C2 1.4L Furio, which had been totaled. It was a complete car, but with some rear damage. So I cut out the boot floor, which I was going to do anyway. When I put the car on a body jig it was only 15mm out of alignment after it’s crash. Since the shell had only cost me $700 I was quite pleased that it wasn’t worse.

“Before the fire, the car was intended to be my next project, with a Honda VTEC engine, but after the disaster it was pressed into service as the twin-engined C2 version 2! In the end, it’s a better car than the first one, so I’m pleased with how it turned out.”

Looking at the finished project, it’s one hell of an achievement. It’s not finished, as Gary quickly points out, with wires needing to be tidied and some cleaning to be done inside. But the attention to detail is impressive, nonetheless. If Citroën ever decided to recreate its infamous twin-engined 2CV Sahara, it could do worse than nip up to Middlesbrough to have a chat with Gary.

Only 694 Saharas were ever built between 1960-71. They used a pair of 425cc air-cooled boxer engines, one at either end to created a rudimentary four-wheel drive system for use by the military, police and farmers. However, there’s only one C2 V12…

Photo 4/10   |   Buttons on either side arm and start each engine separately to allow front-, rear- or all-wheel drive options

Gary’s car uses a pair of 3.0-litre V6 24v engines from the Peugeot 406 Coupe. These developed 194hp and 197 lb-ft each in stock form but Gary carried out additional work, port-matching the throttle bodies and inlet manifolds to the heads, for example. He also built custom side-exit exhaust systems for both engines before adjusting the cam timing.

The front engine sits on custom mounts, while the rear is in a 406 V6 Coupe front subframe, that’s been reversed and welded into place. For relative simplicity, the car uses two tranmissions; both are the five-speed manual from the same 406 V6 model, using custom driveshafts plus a locked diff in the rear. By reversing the selector rods on the rear unit, Gary is able to drive the car without much compromise.

“It’s definitely a one-off,” he smiled. “It’s caused more than a few sleepless nights and I’ve paid a very high price for it, but I’m proud of it. Not bad for a car built in the garage!”

Garage? At home? “Yep. What you see here was built without the aid of a four-post lift, modern tools or computers,” Gary laughed. “It’s pure grit and determination that built this. I lost all my tools in the fire, as well as the space I needed to work, so the challenge of putting this thing together with nothing has been monumental.”

The C2 looks superb, its orange and white color scheme marking it out as one-of-a-kind. “It’s certainly unique to drive,” Gary admitted. “It’s got so much power but isn’t properly tuned. I’ve not had the chance to drive it too far; maybe about 100 miles to make sure nothing would fall off!

“The first real drive I did was into the live arena at this year’s French Car Show. I drove it onto the trailer at home, drove it off at the show and parked up. So the donuts I did were totally spontaneous. But it’s a C2 with two V6 engines! Of course it’s going to be mental!”

Gary isn’t a man to let the grass grow under his feet, and while the car caused a stir, he’s on a quest for more power. “I built it to be used, not parked in a museum. I’ve always wanted to take it to the Nürburgring, and that’s my plan for this year. By then, I’m hoping to have had both engines turbocharged and professionally mapped.”

The engines work separately from each other, with independent ignition systems, giving Gary the option of either front, rear or four-wheel drive. “I tend to use both engines together because I love the grip,” he grinned, “although the tires don’t!

“I get through front tires in no time. The power is great though. I can hold it in a slide and direct it wherever I want to go. I’ve never driven anything like it.”

With all that power from two engines, life in the cockpit can get a tad warm. Engine cooling is a rather rudimentary, with holes cut into the tailgate and rear bumper, but Gary is hatching a plan to direct more air through the side windows. “I realized cooling will become a big issue the more I push the car, especially if I do track days in it. So I have a few things to address. By the time you see it at next year’s FCS (scheduled for Donington Park circuit on 6/17) it will probably have totally changed...”

So from the raw development phase you see here, to the car that Gary intends to cause a stir with around the Nordschleife, you can see how far he’s come in such a short space of time. For now, he deserves huge congratulations for building what people said was the impossible dream.

To see this amazing little car in action for yourself, search for “Gary Stone’s C2 V12” on youtube.com