Alex Villacres has put together this sweet VW GTI on air that has so much poke the car sits on its wheels! 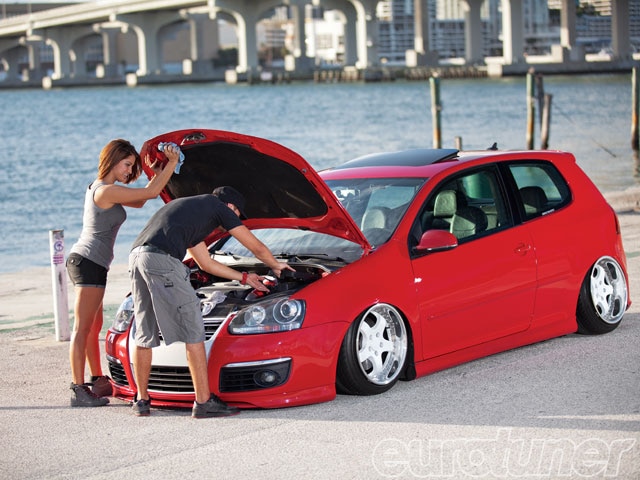 We often come across fascinating routes people take to reach their current project car, but few are as bizarre as Alex Villacres’ story. The 23 year-old store manager from Plantation, FL bought a ’08 VW GTI but the engine blew when a nut and bolt fell into two of the combustion chambers. There was a dispute with the VW dealership over responsibility and Alex eventually walked away empty-handed. He was forced to cut his losses and buy this ’09 GTI, but every cloud… 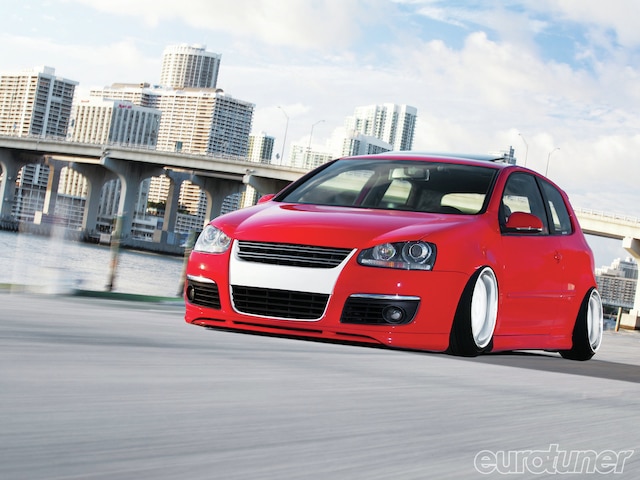 The parts on his old car were the perfect fit for the new one, so within a week of buying it, and with only 300 miles on the clock, the red GTI was under the knife.

All at once it was sporting Axis wheels, FK coilovers, Votex lip kit, downpipe and exhaust.

With the coilovers set low, the fenders were pulled slightly to give a little more clearance and a lot less rubbing. However, a set of Borbet Type A wheels soon had Alex reaching for the fender roller again. And he went at it a third time when the current Work wheels were bolted on.

Eventually the fenders were “All jacked up!” as Alex described them, so he turned to Steve Justin at Rick Case Hyundai. The man is renowned locally for his bodywork and painting skills, so was entrusted with the task of rectifying the wheels arches and painting the car. Somehow, Steve managed to extend the stock metal even further, almost covering the aggressive offset on the wheels, but more of that later…

With the Votex front spoiler and side skirts in place, Alex added an FK badgeless grille from ECS Tuning as well as Jetta lower vents with projector foglamps. He also got a Speedtech böser hood kit, for which Steve went the extra mile by welding the corner pieces to the fenders to make it look OEM.

The side markers and washer jets were shaved from the front bumper, while a European R32 rear bumper was fitted. Alex then smoothed the rear diffuser to remove the central exhaust cut-out because a local firm had created turndown tips for his GReddy exhaust. 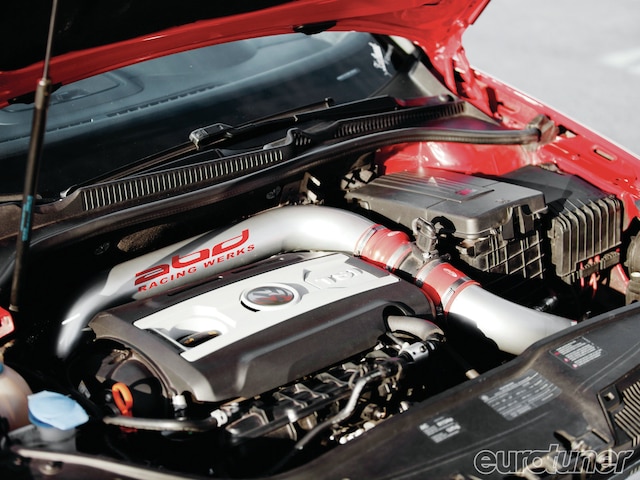 With R32 rear clusters installed and the reflectors tinted to match, Steve repainted the car in its original Tornado red, covering everything but the roof. He was then asked to match the grille surround to the white powdercoating Alex had done to the Work wheels. Initially, the painter suggested it was impossible but subsequently nailed it with a custom mix. These white highlights really makes the car stand out, contrasting the red paint that gave rise to the GTI’s Kool-AiD nickname.

Shortly before preparing the GTI for Southern Wörthersee 2010, Alex installed an Air Lift suspension kit to create the stance he desired. However, he found the rear was tucking too much, so would later fit Re5 Specialty rear bags. Unfortunately, these wouldn’t go low enough, so the owner spent hours trimming and trial-fitting Dorbritz Designs brackets before he got the ride height where he wanted – right on top of the wheels. In fact, as our photos show, the rear fenders were pulled so they could sit between the rims and the very stretched 205/45 Falken tires!

Motor
It’s not all cosmetics. The 2.0L TSI motor has basic upgrades, including Revo stage 2 software to accompany the ATP downpipe and GReddy exhaust upgrade. It also has an ABD intake, with plans for a FMIC and eventually a bigger turbo in the pipeline.

Since it’s not a track car, Alex makes do with around 250hp to the wheels but is saving to increase that number.

The extra boost is monitored by a New South gauge in a neat Osir vent pod. It’s one of a number of interior additions that started with leather seats and door cards after somebody he met at SoWo was willing to swap his hide for Alex’s original plaid seats.

Adding to the luxury is a suede headliner, pillars, boots and rear deck by American Auto Trim. The material gives the car a sumptuous feel and was carried over to the custom trunk setup with false floor Alex built himself. He used a CNC machine to cut the MDF board to precisely accommodate the five-gallon air tank that was subsequently powdercoated to match the wheels.

Other interior mods include a shortened manual shifter, Euro cupholder and light switch as well as a double-DIN Pioneer head unit that was fitted by the owner. He was able to mount it so its flush with the dash in the space originally occupied by the VW screen.

You might also notice the Air Lift control unit in the ashtray. It was painted black to match the console and disassembled to change the lighting from green to red.

Alex is proud to claim he did all the work on his GTI with the exception of the major bodywork and painting. He’s also built a Cosmic green ’00 Mk4 GTI VR6 that sits on bags, and is in the process of working on his girlfriend Marcela’s VW CC.

Having worked on his own cars for years, and helping out local Euro enthusiasts in the area, Alex has decided to start his own business after being frustrated when trying to find local shops to help him. Called Air by Kool-AiD, the new business should be in place by the time you read this. You can find it at airbykoolaid.com if you live in the Florida area.

And don’t forget to check out Alex’s work when the car appears at Southern Wörthersee and other East Coast events. By then it could have the Sparco seats and engine bay wire tuck he’s been promising.