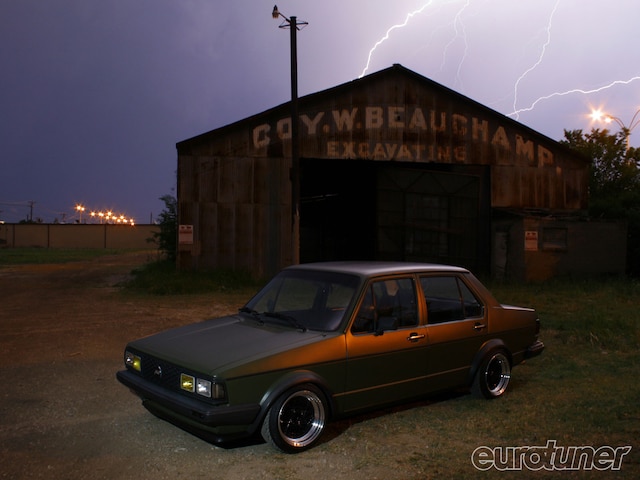 Yeah, you know me... OPP - Other People's Projects - is one of those terms we car enthusiasts use and requires no explanation for those in-the-know. Once mentioned, it's likely to elicit head nods as much as anything else.

To really qualify as OPP, we're talking about a real project: not one from the more liberal definition of bags and wheels. A real OPP has an engine swap, serious wiring challenges, and usually a host of cosmetic issues that will require almost immediate attention.

Bedford, TX resident William Villegas knows all about OPP. You see, his '84 VW Jetta was owned and built by a buddy named Pete, with William buying the car (he traded a Corrado G60 for it) after the Jetta qualified for true project status. But if you're expecting the usual OPP nightmare, you're going to be pleasantly surprised.

"Pete (and his dad) did an amazing job building this car," William explained, "and it's been pretty reliable. I've been lucky enough to focus on the things I want to change versus messing around too much with other issues."

Besides its flat-green exterior, the buzz-box is mostly defined by what's under the hood. The stock 9A block was massaged to fit 83.5mm JE 11:1 pistons, and a ported and polished PL head with a Euro intake cam was bolted on top - but not before being shaved to raise the compression to an eye-opening 12.3:1.

Even running race fuel 24/7 it would be a lot to ask VW's Motronic management to keep things from blowing up, so a Megasquirt standalone system was used. "When I bought the car it was running well," said William, "but there was room to tweak the management. My buddy, Jon Eberle, is a genius with Megasquirt and helped get the car running perfectly."

Getting all those high-comp ponies to the ground is an 020 five-speed transmission beefed-up with a Quaife limited-slip differential and a 0.71:1 diesel fifth gear swap.

The combination of a torquey 16v and effective gearing in a lightweight car still manages to tickle William in all the right places; "Don't think that because it's a 28 year-old VW it won't sneak up on you. I've given more than a few 'fast' cars a run for their money in this beater."

One of the requirements for buying an OPP is to quickly make it your own, and what better place to start than wheels and tires? William told us the car was in his possession for a few hours before the Jetta was wearing a set of 14x7" Epsilon mesh with 155/55 Nankang NS2 tires.

Getting the car to sit properly over that setup was also on the quick list. So he bolted in a set of H&R Ultra-low coilovers.

Cosmetic changes are an equally effective way of putting your own stamp on an OPP, and to that end William changed the lighting with yellow LaminX film, smoked/red tail lights, plus smoked turn and corners.

Already part of the package when he bought the car was a Euro front bumper, "tucked" rear bumper and, of course, the previously mentioned hot rod flat olive paint. "The paint isn't my style," William admitted, "I prefer more subtle colors and a standard base/clearcoat finish. But that's something I can change, so it doesn't bother me much."

Interior mods are minimal but effective: Recaro Trophy seats, Momo steering wheel and hub, as well as an assortment of gauges.

It's possible we've dwelt too much on the OPP nature of William's car. Sure, his buddy built most of it, but William is clearly dedicated to keeping the things he likes - of which there are many. He's simply adding his own personality to the project over time.

At the end of the day, we all have somebody (or something) to thank for building at least a portion of the cars we drive, but once they're in our hands, it's what we do with them that really counts.

With this rowdy Mk1 Jetta, William has plenty to look forward to in the modding process, and he gets to enjoy driving the piss out of a badass car in the process. Sounds good to us. 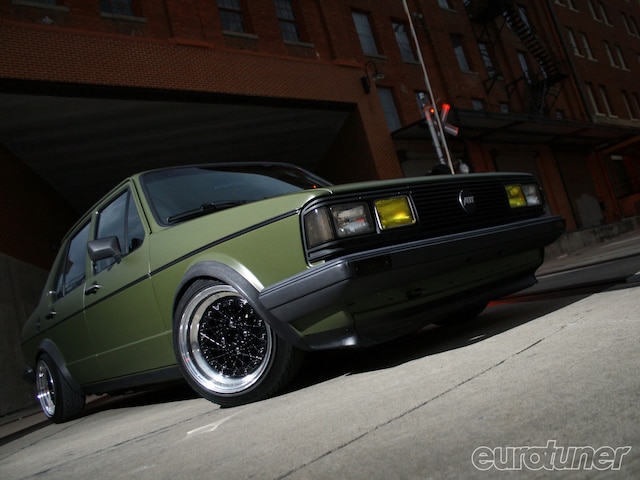 Thanks:
Everybody who helped, Jakeb Miller, Lauren McCauley