Most of us were just happy to simply have our first car, let alone one that looked as good as this Mk1 Cabrio. 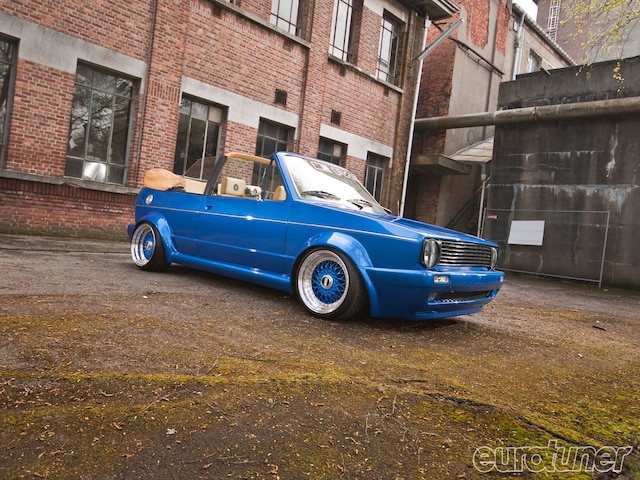 The major reward to buying a car is sitting your ass into the driver's seat, embracing the steering wheel and staring into the rearview mirror to see yourself in the car. Finally you fire it up and drive off into the sunset as if you just conquered Rome itself.

So it would be a real bummer to buy the car you want, go through the emotions of owning it, but not be able to seal the deal by getting it into motion - not legally, anyway.

That pretty much summed up the first car buying experience for then 17 year-old Belgian teen Tim Lepez. It was made worse, no doubt, because the car in question was a mint 1983 Mk1 Golf Cabriolet with plenty of project potential.

"I'd never had a car before. I got around on minibikes," said Tim, now 23 and chief stock administrator at a Mercedes-Benz dealership. "Actually, I was in search for a decent Mk2 GTI, but came across this one in amazingly good condition, so I bought it," he said. "The car was fully original, but had to be repainted. And that turned out to be more extreme than planned," he laughed.

"What was the first thing I did when I picked up the car? Nothing. I couldn't. I didn't have a driving licence, so all I could do was think about what I could change," Tim chuckled.

As it turned out, the time spent thinking, scouring websites and reading magazines helped formulate his master plan.

Color by numbers
With the car finally at home, Tim started sourcing parts and finalising his plans while biding his time before he could drive it.

His first obsession was finding a new color, as the paint job was old and pretty much shot. There were a few colors from the ubiquitous VAG color range he considered, but he eventually decided to look outside the Volkswagen Group for exactly what he wanted.

It was no easy choice, but it seems Subaru was at the top of his shortlist. The iconic Subaru blue was a perfect match for his plans.

In the end, Tim didn't go with the traditional and somewhat darker Monte Carlo Blue, affectionately known as '555' blue thanks to its WRC success, but rather a lighter and striking Subaru WR Blue mica, as it's known in the European market.

With the choice made Tim handed the car to have it painted. Long story short, they didn't achieve the high standard Tim was after. After some phoning around he found another shop with experience at producing show cars. JEM Design in Belgium (www.jemdesign.be) has displayed supreme quality in many aspects of car building and Tim wanted to tap into that.

What a JEM
Having hauled the car down to JEM at Brakel, Belgium, JEM stripped the car and prepared it for a bare-metal respray. The panels and chassis were straight, so they got on with priming and spraying two coats of WR Blue and three coats of clear. Tim, meanwhile, shipped all the interior bits to DECA in Drongen for a complete makeover.

While JEM was working on the car they added their own widebody kit based on Mk2 Golf GTI bumpers. The shop also shaved the trunk and fitted Audi 80 door handles. Other additions included chrome mirrors and door trim as well as clear indicators and tinted tail lights.

Under the hood, virtually everything was cleaned and smoothed. The chassis rails, strut towers and firewall were smoothed and painted in preparation for the 1.8L 8v motor.

Behind the eight-ball
While the original 8v engine was out, Tim devised some performance enhancements that would include a double Weber carb set-up with an upgraded cam and lightened flywheel linked to a five-speed transission.

Of course, there had to be some visual improvements too, so the transmission casing was sprayed Subaru WR Blue, while items like the rocker cover, radiator, cam gear and alternator were polished, with blue hoses adding the final pop.

The motor might not be a powerhouse, but it now looks and sounds eminently more suitable for this Cabrio. However, he doesn't rely on the exhaust for the soundtrack. Tim went to DTF in Brakel, a shop with a long history in making high decibel show cars. They added a Pioneer head unit and Rockford Fosgate component speakers up front, with 6x9s in the rear and a subwoofer in a custom trunk install, all powered by a pair of amps.

Interior design
It took coordination with different companies to time everything right, so that as the custom door speaker pods were ready at the same time as the rest of the interior was re-trimmed and painted.

At that time, JEM didn't do interiors so the task was given to Deca, which has been around since 1969. They totally revamped the interior, trimming the pods, laying new tan carpet, adding electric windows, painting the dash and fitting a tan-colored roof.

The final flourishes would include an Iron Cross shift knob and similar-shaped rearview mirror, plus an Isotta Vallelunga 'boat-range' steering wheel.

Stance
Imbuing this Mk1 with the proper stance is a set of BBS RS wheels and KW Variant 3 coilovers. "I started on 14" Schmidt TH Lines, then 16" DZ Exclusive wheels before I realized that the BBS RS was a timeless design and wheel the perfect wheel for the car," Tim told us.

The RS didn't escape the JEM treatment, though. The barrels on the 16x8.5" front and 10" rears were painted Subaru WR blue before 195/45 and 215/35 Dunlop tires were stretched over the rims.

"I've owned the car since I was 17 and it's been through several stages over the years but now that it's done, nothing will change any more," explained Tim, elated with the results.

With that said, he did confess to contemplating a leather-covered dash, rear disc conversion and an Audi TT engine upgrade. So this probably won't be the last we hear of Tim Lepez and his Mk1 Golf Cabriolet. 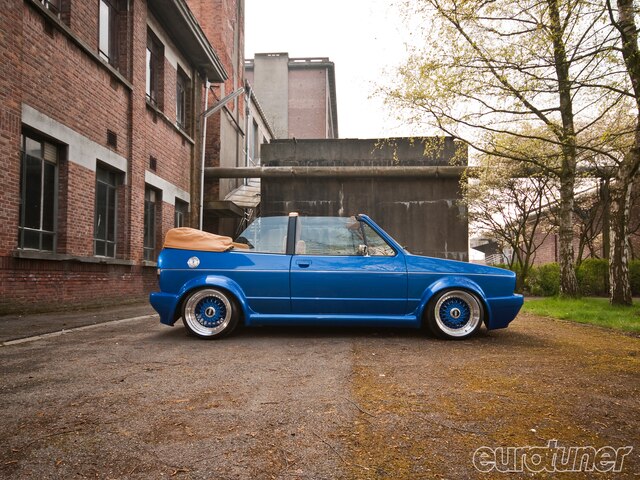