Fun to drive, reliable to own, and cheap to run, the Toyota MR2 is the everyman's mid-engine exotic sports car. 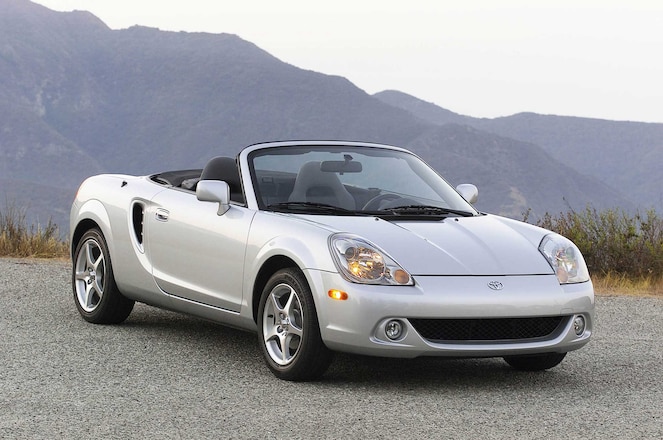 Edited by Super Street, 5/7/2020 - The Toyota MR2 is definitely an outlier when it comes to platform popularity, but we'd be lying if we didn't admit to seeing the numbers of modified W20 (or second gen.) grow over the years. Regardless of which generation floats your boat, the MR2 will be forever remembered through its history as a great handling machine, which is why we think it deserves a second look as a starting point for a project. You'll find some nice customized examples in this story's gallery and linked out below to get your creative juices flowing.

Following the success of small, relatively affordable mid-engine sports cars such as the Porsche 914, Fiat X1/9, Lancia Scorpion, and even the Pontiac Fiero, Toyota presented a new mid-engine concept of its own at the 1983 Tokyo auto show. Dubbed SV-3, the prototype was well enough thought-out that very few changes were made before the production Toyota MR2 (MR2 = Midship Rear-drive 2-seater) debuted a year later. Though "Mister Two" was a bit of a parts bin special, with the engine, some MacPherson strut suspension components and plenty of switchgear coming from Corolla models, it was also an excellent driver's car right from the start. Suspension tuning was widely reported to have been finalized at Lotus and prototypes were shaken down by none other than American Formula 1 and sports car racer and manufacturer, Dan Gurney.

With a 112-hp, 16-valve, twin-cam 1.6-liter inline-four mounted ahead of the rear axle, disc brakes all around, a five-speed manual gearbox (a four-speed automatic was optional) and an optional (yet functional) rear spoiler, the MR2 was essentially a budget exotic car. Curb weight was approximately 2,300 lbs. and 0 to 60 mph came about in 8.4 seconds, roughly on-par with the contemporary Porsche 944. Handling was the little Toyota's strong suit, posting strong skid pad figures and benign handling traits that could keep a well-driven MR2 on the heels of far more powerful and expensive cars down winding backroads. 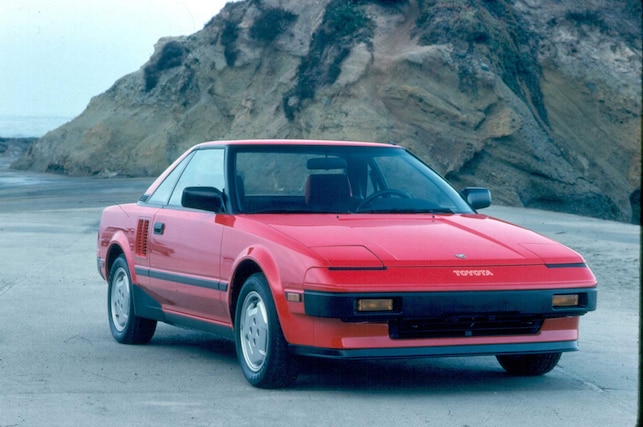 Removable T-top glass roof panels were made optional for 1986, but larger changes were in store for 1987. That model year, all MR2s received larger brakes, new taillights, a revised passenger-side vent, refreshed interior and seats, and a new supercharged MR2 became available. This new intercooled, Roots-type supercharged model used a stronger version of the 4A-GE engine block and transmission (which would also be adopted by 1987 and onward naturally-aspirated models) and developed 145 hp and 140-lb-ft of torque. Unfortunately, supercharged models also tended to be fully-optioned with mandatory T-tops and other extras, increasing weight to 2,500 lbs. Nevertheless, 0 to 60 mph times fell to roughly 7.0-seconds. These Supercharged MR2s are distinguished from standard variants by their raised engine lid vents and "Supercharged" badging on the rear and sides. The Mk1 MR2 ended production after the 1989 model year, with 96,666 sold in the U.S. and Canada. 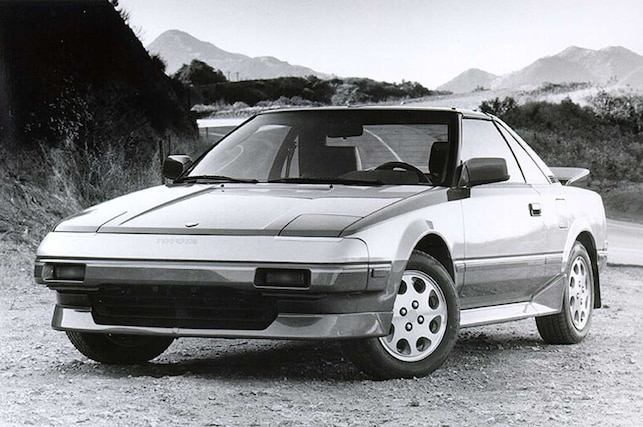 The Mk2 Toyota MR2 arrived in the U.S. in 1990 for the '91 model year, and like many Japanese sports cars of the decade, such as the Toyota Supra and Mazda RX-7, the MR2 moved significantly upscale, becoming more expensive in the process. The Mk2 MR2 was larger, heavier (ranging from roughly 2,600 to 3,000 lbs.) and more curvaceous than its predecessor, looking nearly as exotic as Ferrari's then-new 348. Its powertrains increased in power to cope, with the standard car making 130 hp from a 2.2-liter, 16-valve inline-four borrowed from the Camry, while the MR2 Turbo made 200 hp with its 2.0-liter turbocharged 3S-GTE engine, as used in the rally-homologated Celica All-Trac Turbo. Naturally aspirated Mk2 MR2s stuck with a five-speed manual or four-speed automatic, while all Turbo models came with the five-speed manual. Similar to the Mk1 MR2, Turbo models had raised engine lid vents and "Turbo" badging on the rear of the car to distinguish them from the standard model. Zero-to-60 mph times for Mk2 MR2s were roughly 8.0 seconds for the naturally aspirated version and 5.8 seconds for the MR2 Turbo. 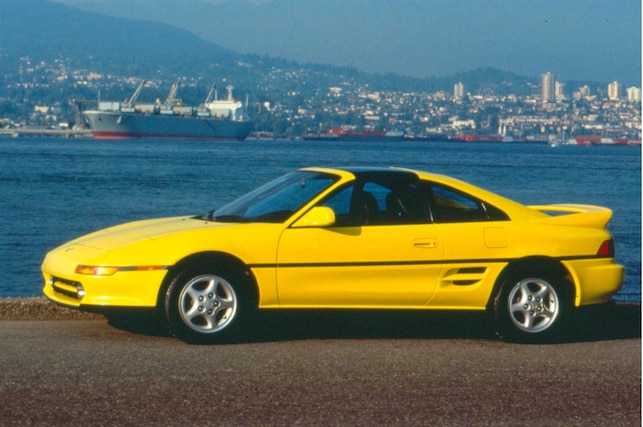 Revisions to the U.S.-market Mk2 MR2 began for the 1993 model year, with all cars receiving suspension changes to dial out lift-throttle oversteer, which plagued drivers inexperienced with mid-engine car behavior. Turbos also received larger brakes, an optional limited-slip differential, and were only available with the previously optional T-top roof style. Tires were wider for all MR2 models as well. For 1994, naturally aspirated MR2s were bumped to 135 hp and the taillights were restyled. In Japan, Turbo engine development continued with these models now making over 240 hp, but emissions requirements in the U.S. didn't allow these changes. As it was, Mk2 MR2 Turbo sales ended in California-emissions states after 1994, and the MR2 was discontinued for the U.S. market altogether for 1995, with 33,111 sold in the U.S. and Canada. Production continued in Japan until 1997. 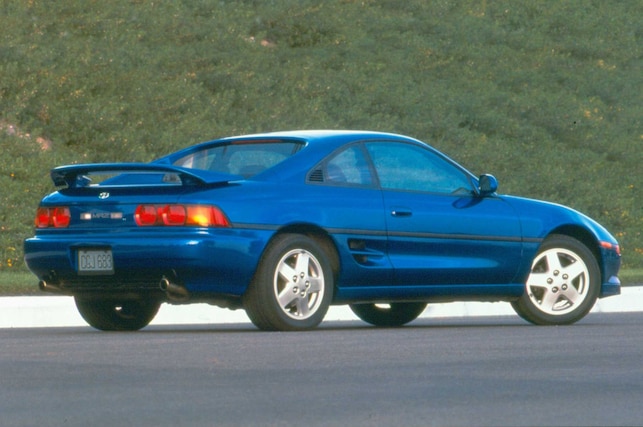 For the third iteration of the MR2, launched for the 2000 model year, Toyota went back to basics with the MR2 Spyder. Offered only as a full convertible, the MR2 Spyder's overall size wasn't significantly larger than the first MR2s, resulting in lighter weight (2,200 lbs.) and a return to more modest power levels. Unfortunately, that small size meant less storage space than either MR2 that had come before it: just under 2.0 cubic feet in total, mostly in two storage boxes behind the seats. For the first time, no forced-induction variant was offered, with a 138-hp, 126-lb-ft 1ZZ-FED 1.8-liter all-aluminum inline-four engine being the only one offered. A five-speed manual transmission was the only gearbox available until 2001, when a five-sped "Sequential Manual Transmission" (SMT) offered automated shifting, but lower performance. Zero-to-60-mph times for the conventional manual were roughly 6.8 seconds, while it took SMT cars nearly 9.0 seconds. For 2002, the MR2 Spyder was given a light refresh, with new seats, 16-inch staggered rear wheels, an extra gear for the SMT transmission, revised suspension tuning, and a new underbody brace for structural rigidity. In 2003, a Torsen limited-slip differential was optional, while ride height went up slightly. Model year 2005 was the last for the MR2 Spyder in the U.S., with cars being sold into 2006 in other markets. Just 27,941 MR2 Spyders were sold Stateside, making it the rarest version of all MR2s. 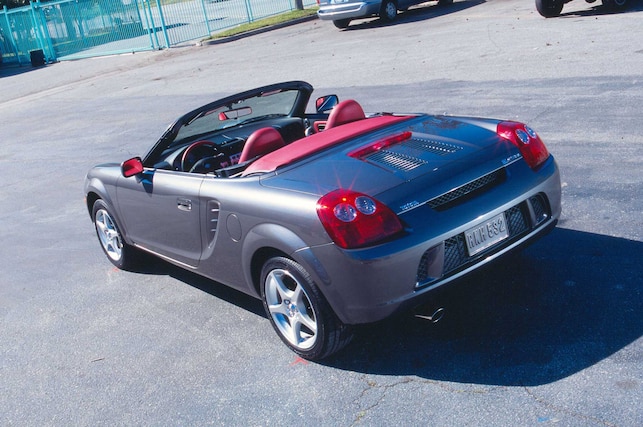 Special performance variants of the MR2 are rare. A single all-wheel-drive Group B rally prototype of the Mark 1 MR2 dubbed "222D" began development in Japan but was left unfinished with the demise of the race class in 1986. Today, the car resides in the Japanese Toyota factory collection. Mark II MR2s, for a time, could be factory-converted to look like the widebody TRD2000GT race cars that ran in Japan's GT-C series, but high cost meant that just 35 were ever built by Toyota Technocraft Ltd. Limited numbers of turbocharged Mark III MR2s were built for the U.K. market, while Japanese buyers could order a version restyled by Italian design house Zagato.

While Mark I MR2s are most plentiful in the U.S., they are also the oldest, and years of low second-hand values mean that many have been abused past the point of rescue. The best of these cars, especially rarer supercharged versions, have recently started coming up in value. Mark II MR2s were unfortunately popular with tuners in the 1990s and 2000s, again making it difficult to find a stock, unmolested example in solid condition. Mark III MR2 Spyders are the newest and thus the easiest models to find in respectable shape, and also never really caught on with the aftermarket crowd, leaving many original examples. With any MR2, values will be strongest for those equipped with manual transmissions, which most were built with.

How Much Is a Toyota MR2?

Toyota MR2s vary in price from generation to generation depending on condition, miles and options. Generally speaking, a low-mileage Mk1 MR2 in excellent condition is roughly a $8,000 car, while supercharged models can add up to 50 percent to the value. Similar condition Mk2 MR2s start around $10,000, and Turbocharged models are again worth roughly 50 percent more. An excellent, low miles Mk3 MR2 start at roughly $12,000.

How Fast Does a Toyota MR2 Go?

Why Did Toyota Stop Making the MR2?

As demand for small sports cars waned, Toyota pulled out of the marketplace. Toyota MR2 sales declined in the U.S. with each new generation of vehicle. Mark I MR2s outsold both Mk2 and Mk3 versions by some 300 percent.

Will Toyota Bring Back the MR2?

Toyota as a brand is now more focused on practical, fuel-efficient commuter models. There are no current plans to bring a new mid-engine MR2 model to market. Toyota's current sports cars are the front-engine Toyota 86 and Supra, co-developed with Subaru and BMW, respectively.