The thin, often blurred line that separates street cars from full-fledged track cars is a slippery slope, and one that this 2018 Civic Type R seems to have settled comfortable upon. Its owner, Mary Valdez, made a calculated approach to the build - a process that's slowly and steadily continued to enhance her FK8's track ability while simultaneously allowing her skills behind the wheel to improve. 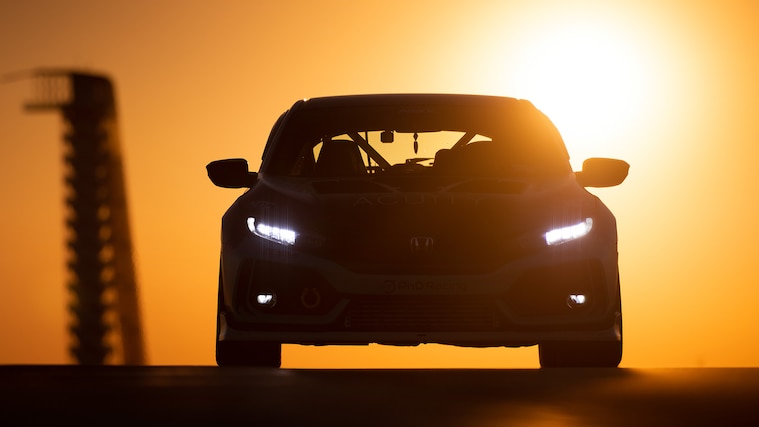 When most people think of a dedicated track car, they conjure up thoughts of a high-powered, stripped down chassis that gulps race fuel and is all but intolerable on the street. The truth is, depending on your outlook, something as simple as a full bolt-on affair and stiff enough suspension can end your car's daily workhorse duties. For Mary, her car remains street-friendly and fiercely competitive and, sans the decorated livery, would blend right in with any other modified CTR on the street.

A lifelong Honda enthusiast, it was no surprise when Mary found her way to this Type R. "I purchased my Civic Type R in 2018 and had no idea what I wanted to do with it, I just knew I wanted the first Civic Type R to come to the North American Market. I drove it to work and back occasionally, and on Sundays for a few months - keeping it bone stock." You already knew that some sort of modification was mandatory and for Mary, it started with a set of TE37, Swift springs and a simple shift knob. Nothing too serious, but the new additions would serve as a gateway of sorts as she embarked on her very first track day. "It was something I'd always wanted to do but never felt I had the right car to do it with. It was an eye-opening experience, but I was definitely hooked." 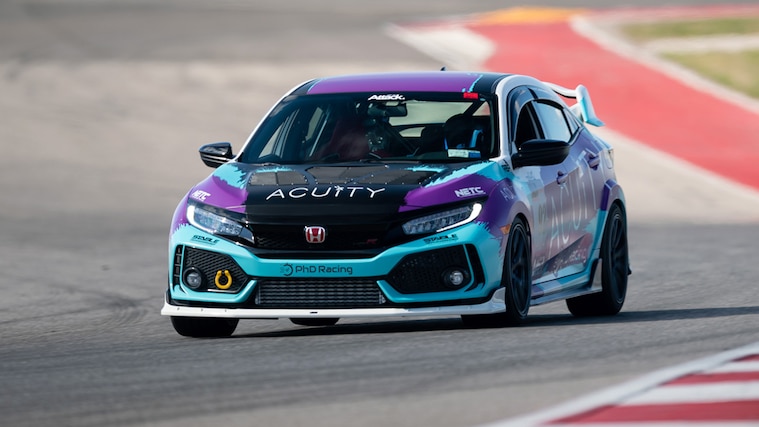 The winter months would put a halt to her street and track endeavors and while the car was in hibernation, she began researching more parts online, which led her to Acuity Instruments, a brand we've worked with on multiple occasions, including our Project 10th gen. Si. "When I discovered the amazing parts catalog Acuity Instruments had developed for the car, I ordered their adjustable short shifter and ESCO T6 Shift Knob, and very shortly thereafter, added the rest of the catalog to my car, including the Throttle Pedal Spacer, which has been a game changer for me."

The positive changes made to the car, along with the long winter break resulted in Mary using it as her daily driver, stacking miles quickly with her 145-mile round trip each day. Due to her desire to maintain its reliability and street-friendly nature, she avoided any major power upgrades, but she increased her track days significantly, almost weekly, and continued her development behind the wheel. Her parts collection kept building as well, at one point arming the car with Mugen, Varis, and Voltex parts while swapping out multiple sets of TEs. "I was so addicted to driving it that I bought a set of Gram Lights with snow tires and drove it through many brutal NY snowstorms during the winter of 2019-2020."

The days spent on track weren't just about having a good time, but also focused sessions that saw Mary working with professional coaches to help her and the Type R continue improvement. An effort that paid off in October of last year when she captured the Overall FWD lap record at New York Safety Track. "One thing I'm especially proud of - throughout all the abuse on track and many miles of commuting, the car remained fantastically reliable in every aspect." To drive that point home, with over 70K on the clock, the only thing Mary has needed to replace, other than tires and brake pads, are the front calipers. 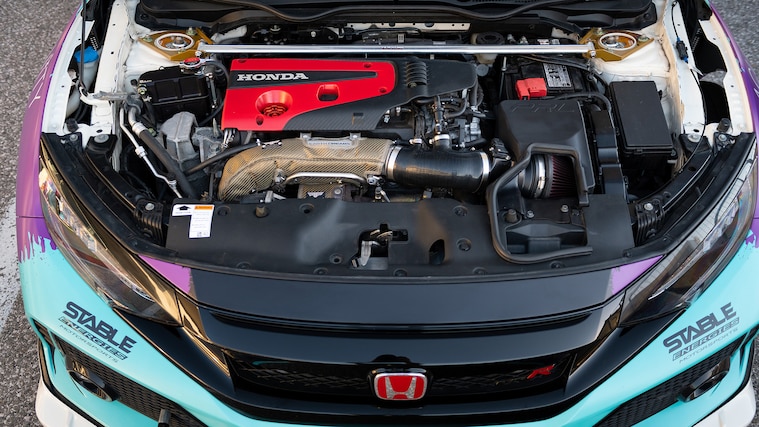 There's an abundance of aftermarket goods available for the 10th gen. Civic and that goes for the Type R especially. From questionable blow-off valves to complete turbo kits, there's no shortage of options. Much like her approach to self-development behind the wheel, Mary's performance upgrade choices have been calculated. Up front, PRL Motorsports' intercooler with charge pipe kit and high-volume intake bring in some fresh air, while a J's Racing cat-back exhaust expels the waste. A Radium engineering overflow tank relieves that factory chunk of plastic of its duties, and the same brand was called upon for their PCV catch can. That's really it. She's not trying to hit big peak numbers to post on IG and this combination of parts, along with her long list of Acuity upgrades has made a significant impact on her track experience. "I've taken the quality-over-quantity approach with modifying it and focused on keeping it extremely well maintained."

With a few years of track experience now under her belt and having found success, Mary felt it was time to take a step up in competition. "Time Attack is a sport that I have followed as a car enthusiast (especially JDM) for many years, and it was always a dream to be able to participate myself. In 2020, despite the ups and downs of Covid-19, I gained enough seat time to start competing. After lots of research to determine which class would be best, I thus began the process of converting my car from a clean, JDM-parts-clad daily driver, to a purpose-built and spec'd-to-class-rules track car." Off came the fancy Voltex rear wing and lightweight Varis hood to avoid being bumped out of her respective class choice, and today you'll find a factory wing out back and a heavily vented OEM hood in place. Those hood louvers, along with a 2021 CTR grill swap on the outside, as well as Acuity's reverse-flow cooling hoses, Koyo radiator, HKS oil cooler and PTP turbo blankets on the inside, help combat heat soak issues that have plagued many 10th gen. Civic chassis Type Rs on the track. Anticipating increased intensity with her dive into time attack, Mary increased her level of safety with an OMP HRC-R halo bucket seat laced with a Schroth 6-pt. harness. An EVS Tuning roll bar was also bolted in but being that class rules dictate an absolutely complete interior, Mary picked up a base model rear seat and trimmed it in order to fit the roll bar in place and still meet her intended class requirements. 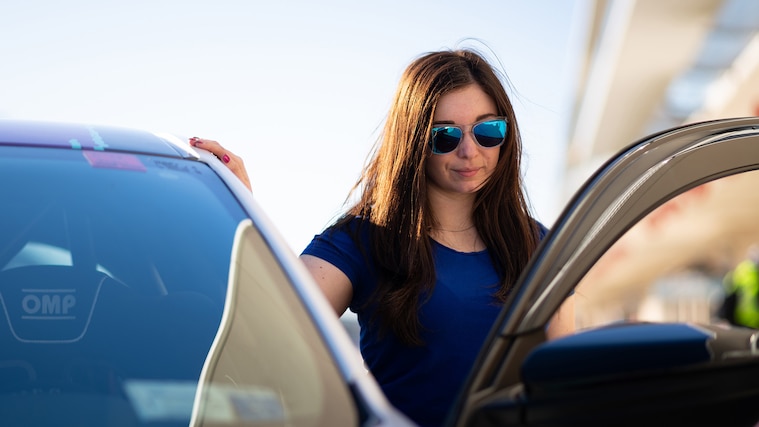 The hard work and perseverance have certainly proven worthwhile and Mary's infatuation with Honda's modern day golden child is stronger than ever. She adds, "It's awesome having a racecar that I can still totally drive and enjoy on the street whenever I want. So far, all of our changes have paid off, thanks to the help of my sponsors, supporters, and my boyfriend's tireless work in the garage with me this winter getting my car ready. I was able to get on the podium at my first ever Time Attack event, Super Lap Battle, and I set the FWD record for my class. Future goals for the build include adding some power gradually and developing the chassis from every angle with Jackie and Alex over at PhD Racing to get the most out of it. We will be competing in Gridlife Street Class and Global Time Attack Enthusiast Class for the 2021 season."

Side note: So, how did Mary end up with a sponsorship deal with Acuity Instruments, the brand that she discovered early on and who she ended up purchasing an entire catalog of well-designed parts from?

Acuity's Russell Garehan states: "We reached out to Mary about sponsorship in late 2020 as part of an effort to broaden our support of up-and-coming grassroots racers. We saw Mary had an excellent, positive attitude and a very genuine drive to learn, grow and succeed - all attributes that we believe are critical to success. Our goal with Mary and other racers we sponsor is to do something more productive with our advertising budget, particularly in a way that allows them to have a chance to succeed at a level that may not have been accessible to them without support. We feel very blessed to have the opportunity to work with Mary and are excited to see what 2021 and beyond holds for her." 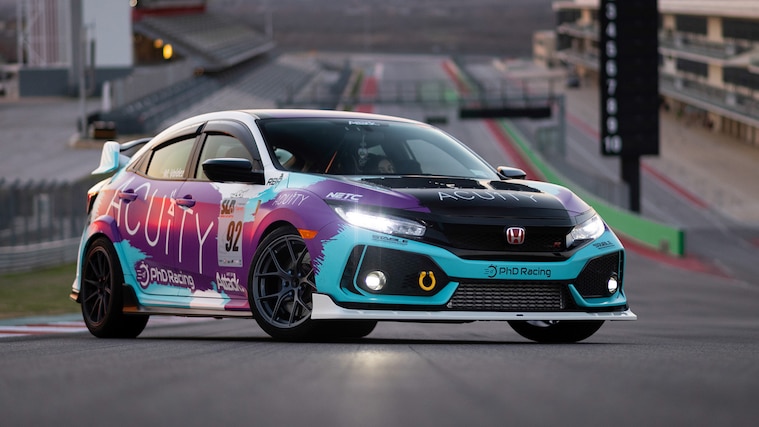