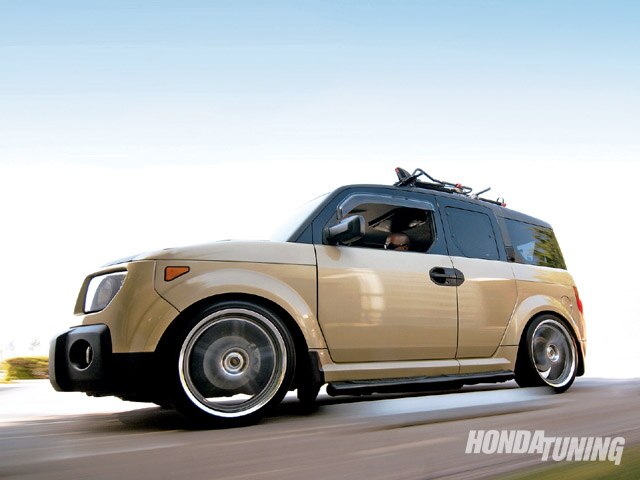 No one can deny the popularity of cars like the Civic, Integra, or even the S2000, but let us not forget about those chassis that reside among the outskirts of the cool crowd. The aftermarket and, admittedly, the media have long neglected cars like the Prelude, Accord, and Civic wagon. Make no mistake about it though, cool crowd acceptance isn't limited to the big three but memberships are steep. Even in import-rich Southern California, tastefully modified, well-balanced versions of less-than-popular models are a rare sight. It isn't easy embarking on a build that's not fully supported by the aftermarket. Careful planning, a bit of ingenuity, and a whole lot of creativity are crucial to ensuring the project will actually draw some positive attention rather than fall off the map. Introduced in 2003, the Honda Element is a car that doesn't really fit into any specific category. It's not really a car at all and, by all definitions, isn't really a truck either. It's really just a big box with a ton of interior space and unmatched flexibility, as well as a quirky outward appearance. Add to that a hefty curb weight and an absence of cutting-edge aerodynamics and it's easy to see why the Element hasn't infiltrated into the cool crowd yet.

Carson, Calif.'s, Ojay Bayang is a guy who's been through a few generations of Civics and even spent some time working on an older Accord, but eventually landed in an '05 Element's driver seat. "I originally bought this to get away from the car scene. I had too many tickets with my Civic, and I just wanted something to cruise, maybe upgrade the audio in, and throw on some wheels," Ojay says. After the audio and rolling stock had been replaced, a failed attempt at color matching the factory plastic panels resulted in a trip to his local body shop to start from scratch. After some serious contemplation, the decision was made to paint the body Spectra Master Gold Pearl with Blackhawk Night Pearl applied to the body's upper half and roof skin. A '07 front bumper and grille were also used to give the '05 model a face lift; the black-housed headlights and cleared-out amber turn signals add just enough contrast to sneak past the average guy, yet turn the heads of those in the know. 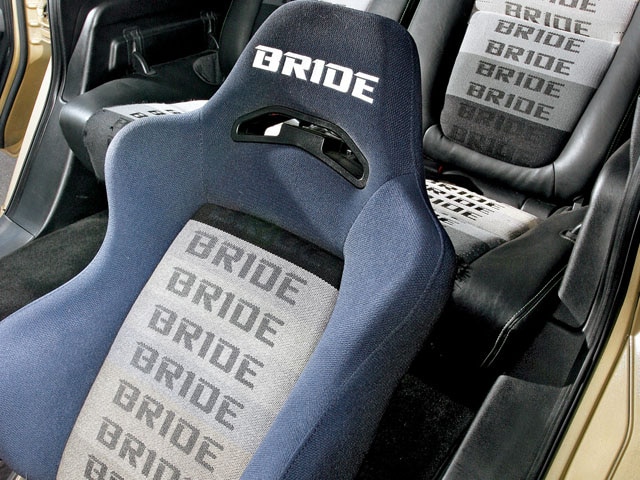 Perhaps the Element's most noticeable mod is its massive drop and high-end rollers. The suspension setup consists of TEIN Basic coilovers paired with an SPC alignment kit and rear lower control arms, and Suspension Techniques antiroll bars. For added security, the rear subframe welds were reinforced to help handle the newfound ride height and prevent separation. Today, 20x8.5 Volk GT-C wheels wrapped in 245/35-20 Falken tires hit the pavement, but that may change very soon because Ojay's been known to swap wheels on even the smallest of whims.

With nothing more than the paint and suspension completed, Ojay's Element was arguably ahead of the competition. Not one to leave well enough alone, he began to add the fine details that would take his build one step further. Bride Ergo seats were bolted in with matching fabric covering the rear seats and various interior panels. An Alpine CVA 1005 in-dash unit paired with a 17-inch Planet Audio roof-mounted, flip-down monitor add a bit of style and entertainment for his passengers, as does the Sony PlayStation 2. Underhood the engine was gently massaged with a carbon-Kevlar, Password:JDM intake with a matching spark plug cover and relocated battery. Ojay also assured us that he has much more in store for the virgin K-series.

Ojay's project is a standout but not just among fellow Element enthusiasts-it'll hold its own among most any Honda enthusiast. He took a chance with a chassis shunned by many and produced a masterpiece that's taken home trophies at Los Angeles' Nisei and Chinatown Showoff events, JDM Theory, and nearby www.nwp4life.com/Eibach events, proving that being different isn't always a bad thing. When asked what's in store for the golden box, he simply says: "Probably more custom work, since there's not much aftermarket help. I'll still daily drive it and continue to use it for more road trips, vacations, and snowboard weekends." Now that's thinking inside the box.

A Photoshopped black Element from way back when