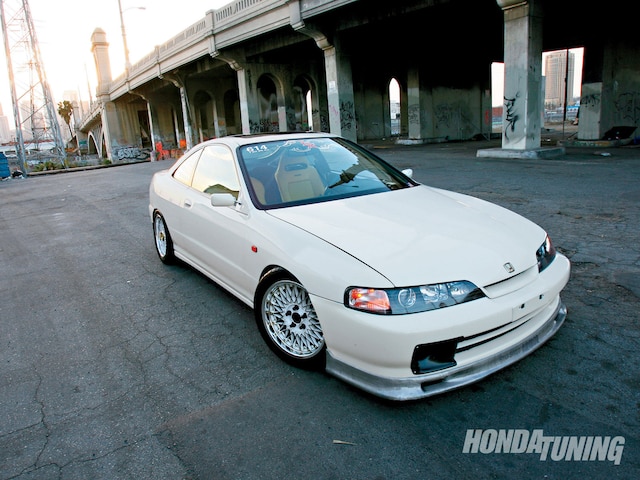 When your wardrobe consisted of nothing more than a box of Huggies, Arn Reyes was changing his own oil. When your diet and your mother's teet were one in the same, Arn Reyes was street racing. And when the closest you got to rockin' a Civic was your stroller, Arn Reyes stood at the forefront of the Honda movement, waiting for things to blow up.

Many taut themselves as old school Honda enthusiasts, but Arn makes no such claim. Such is often the case when considering those who've truly been around the block and lived to humbly tell about it. Arn's journey began sometime in 1993--not behind the keyboard or on a forum--but on the streets of Los Angeles. "Trends were set on the streets, not on the Internet, like today," Arn says. Modifications were made in secrecy, and the idea of digital "build threads" would have been the stuff of comedy. You did your own thing, hit the streets, and either got noticed or didn't. "Respect was earned at the races," Arn says, "not on a forum; if you got it, you were the shit."

Parts were sourced, bought, and traded with the help of weekly publications like Southern California's infamous Recycler Classifieds, new products were discovered and sought after at one of the many race shops, and trends were set at car shows and late-night street races. There were no "Mugen threads" for guys like Arn to "subscribe" to, which makes his history and passion for the brand as well as the fact that he's owned nearly every wheel the company's ever made--multiple times over--all the more impressive. "I didn't fall in love with Mugen after reading one of those Hyper Rev Civic bibles," Arn says. "I discovered the brand first-hand after seeing my older brother's friends' cars from team Sokudo." Arn reminisces of the first set of M7s he'd ever laid eyes on, at a time when such rims could still be purchased brand new, mind you. Mugen goods were neither rare nor old, but well-trained enthusiasts with an eye for quality recognized the brand's respectable traits early on. Arn also recalls "one of Sokudo's white, '92-'95 Civics that had a set of RnRs," at a time when RnRs were considered neither old school nor sought after. Ah, and while the phrase "'92-'95 Civic" may sound somewhat cumbersome, understand that chassis code monikers like "EG" and "EF" were still several years from being coined as was the term "JDM." If you had an '88 CRX back then, you simply called it an '88 CRX.

Time passed, Arn grew up, and he eventually acquired his '97 Integra GS-R. Shortly before that he started his own car club--Abunai Racing--and later amassed more rare parts for himself than most could ever dream of, and managed to supercharge the DC2 along the way. Although turbochargers have long trumped superchargers in the eyes of the Honda enthusiast, Arn's decision to fit the Integra with a Jackson Racing blower was an easy one. "The supercharger was an impulse buy. I love boost!" he says. And why shouldn't he? It wasn't long ago that Arn ruled the streets with a 623hp Civic. "My friend threw me a deal on the supercharger and I just couldn't pass it up." Understood.

Despite Arn's legacy, he remains approachable and faces the same problems any enthusiast does. "I had my front lip jacked from my driveway once and from then on I've been paranoid," he says. "When I take the car out, every two minutes or so I have to look out the window or step out the door to make sure it's still there. When I went to college, if I didn't find a good parking spot, I'd drive 25 miles back home, consequently failing or being forced to drop the class." It's a price not unfamiliar to SoCal Honda lovers and is one many are forced to pay for residing in the Honda theft capital of the world. Lucky for Arn, the theft stopped with that front lip, and he's been fortunate enough to hang onto each part and car he's owned until he's found himself ready to let them go on his terms.

Aside from the supercharger, Arn's GS-R comes to life with a Mugen header and exhaust, and a Comptech intake. The package has been fine-tuned with a Crome engine management system, re-geared with an Integra Type R 4.7:1 ring and pinion, and put to the ground with Work Ewing rims pushed inside Nitto Neo Gen tires. The combination is good for 215 hp and a 13.7-second pass at the drag strip in street trim. Not too shabby considering Arn can finish his pass, make a U-turn for the nearest car show, and throw a First place trophy in his trunk, which he's done on more than one occasion.

Arn may be set in his ways, but make no mistake, the man is willing to adapt. For as much as he insists that the Internet needn't be prerequisite to building a quality car, he won't deny its usefulness, such as the time he logged on to find out about the Integra Type Rx. In an effort to stand out, Arn sourced his interior from the rarest Integra of all--the Type Rx, which includes, among other things, a sought-after pair of signature-yellow Recaro seats. But such Honda rarities are nothing new for Arn, a guy who's owned everything from hard-to-find Rays Garcia Tuned Speed Choppy rims and Mugen "teardrop" mufflers to SSR and BBS wheels you're likely to never see in person.

Arn's been around the block, but he'll be the last person to tell you about his journey. It's one that most likely started before you were born, continues today, and is ever-changing. Think you're old school? Think again.

Building cars for how long:
14 years

Some have never heard of it, others don't believe in it, but rest assured, the Integra Type Rx is no fable. Built primarily for the Japanese consumer who isn't ashamed of letting performance take a back seat to amenities, the Type Rx--unlike the standard Japanese Integra Type R--features novelty luxuries like retractable mirrors, remote keyless entry, tinted windows, and a beefed-up Pioneer sound system. But performance hasn't been left out of the picture entirely--Honda did go all out by fitting each Rx with aluminum pedals. And the stuff we really care about isn't any different than other Japanese-spec Integra Type Rs. The engines are the same...1.8-liter, DOHC VTEC, B-series powerplants. And so are the gearboxes. And the brakes. And the suspension. And, well, you get the picture. But inside, it's a slightly different story--select Integra Type Rx models were sold with yellow Recaros, right from Honda. Now if a pair of bright-yellow Recaros doesn't stink of performance, what does? 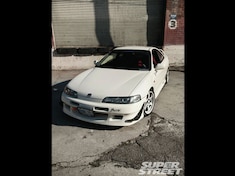 While filtering through the run-of-the-mill submissions, I stumbled upon what appeared to be a pretty serious Integra Type R. What set this car apart was the photos of Henry Ng's 1997 Acura Integra Type-R on the racetrack. 2500 miles later, Henry is ready to compete in the 2011 FF Battle 3. This is his story. - Super Street Magazine 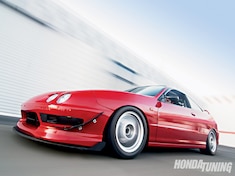 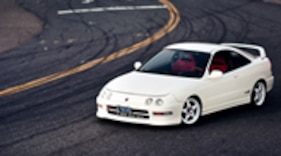 This 1997 Acura Integra Type R doesn't have a heavy mod list, but it's everything a Type R should be and it's immaculate. - Super Street Magazine

Check out the SCCA and NASA Championship race results! Sport Compact Car Magazine has all the information on the results of these events and more.