The CRX That Never Should Have Been 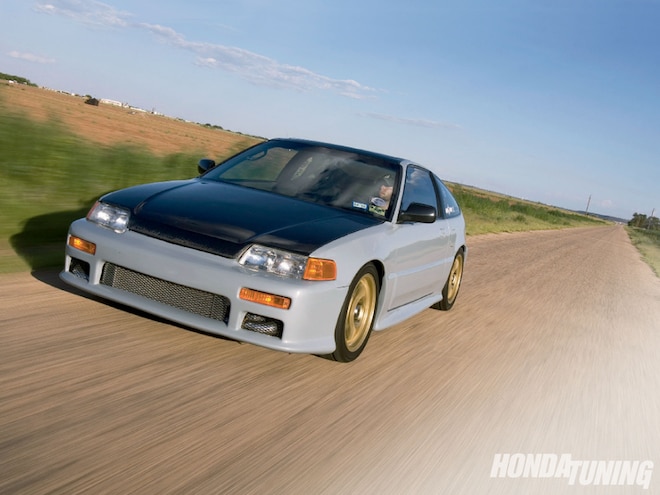 Ramon Briones shouldn't own a CRX. And he never should have built the one he's got. Chances are you wouldn't if your first one was left to collectively rot in body shops for nearly two years, was broken into, and was finally stolen. But you're not Ramon. 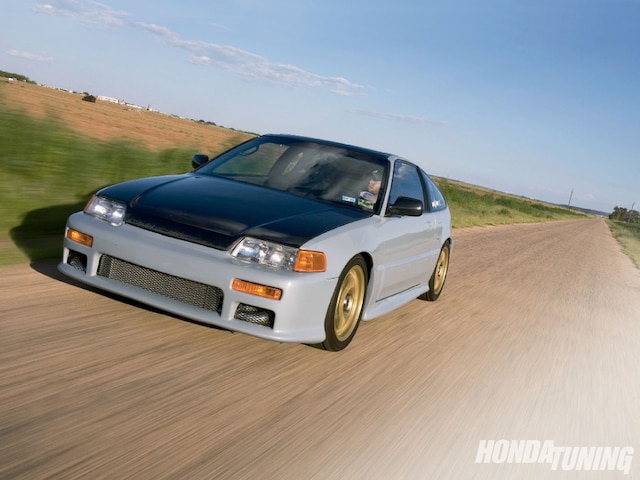 El Paso, Texas, wasn't a hotbed for Honda performance in 1996. Uni-wipers, racing stripes, and fog lights were the extent of it. Even so, Ramon-then a two-time Volkswagen owner-migrated toward the Honda camp. "It was instantly my life," he says. Ramon picked up his first 1991 CRX Si for $2000-a steal considering the car was only five years old and in relatively decent shape. Sure, its door was dented and its fender was pushed-in, but that was nothing a little body work couldn't remedy. Ramon did those things to his CRX that most are too embarrassed to admit. Supra taillight conversion? Yep. Chrome rims? Uh-huh. Kawasaki green paint covering up a molded-in Shogun-style body kit and rice-tastic ghost flames, all of which cost him $400 and was brought to fruition in "some dude's backyard"? You bet. To be fair though, Ramon's an innovator. A mover. A shaker. It was the mid-'90s, and The Fast & Furious franchise had yet to be conceptualized.

But Toyota body pieces and motorcycle paint schemes soon became all too much for Ramon, which prompted him to consult with his local performance shop for a full-blown makeover. Twelve months later and with nothing to show for its days stuffed in the depths of a warehouse save for cobwebs and Ramon trailered his CRX home. He tried again elsewhere; this time the shop owner allegedly broke into his own building-and Ramon's car-and left town. Again, Ramon tried, only to have a third shop owner play the disappearing act. Out of shops and out of patience, Ramon parked the car for a bit until a friend offered to store the CRX in his backyard free of charge. Understand Ramon's luck and it should go without saying; that friend would also disappear along with Ramon's CRX. Neither were seen again.

Right now is about the time you'd give up. But you're not Ramon. Months passed but Ramon never forgot. He combed through the classifieds for replacement candidates, but between the money he'd lost in shop deposits and parts he'd bought for his departed CRX, the funds for a hatchback substitute simply weren't there. Little did he know that his dad had been combing those same classifieds-until the day he invited Ramon on a little drive. They pulled up to a house with a '91 CRX Si parked out front, "for sale" sign and all, even black like Ramon's first, before the silly paint job. "Get in it," his dad says. "Here are the keys. I'll see you at home." You could say Ramon was surprised, even floored, but you'd be understating the situation more than you could ever know.

Ramon didn't have that second CRX for long before he lowered it, covered the engine with a ZC hood, swapped on some JDM taillights, and added a few other knickknacks. But then the modifications stopped. "I didn't want to do anything more to this car in fear that what had happened to my last CRX would happen to this one," he says. And so the CRX sat. And sat-a first for Ramon, who'd done nothing but modify just about every car he'd ever owned. He even went so far as to buy a Nissan 350Z, hoping that would keep him from modifying the Honda, which he was all but convinced was destined for the same bad luck as the former. As you'd expect, despite the brand-new Z, Ramon soon ended up looking for excuses to drive the CRX. Those excuses later turned into a mantra. In Ramon's words: "I realized that my heart belonged to Honda, and that I'd never get over my old 'Rex until I built another one." Consider the fire re-ignited.

Ramon partnered up with his dad this time around, following his lead as to which body shop to trust. The lead proved worthwhile but the man behind the good idea was soon diagnosed with cancer. "The one who got me back into the game and gave me a second chance was now fighting for his life," Ramon says. The level of intensity Ramon displayed in finishing his CRX to both his and his father's standards should go without saying. Fortunately, Ramon's dad's story ends just as well as the CRX's. Despite a tank-green paint job that had recently been applied, the chassis was completely gutted, including its glass, steering column, and carpet. Everything. Fresh paint was applied, a Peak Boost-fed B18C was dropped in, and the chassis was set on TEIN Super Street coilovers perched behind Rays Gram Lights. All of this is good for 382 whp at only 11 psi of boost. Impressive, but not nearly as impressive as the 500-plus hp Ramon's said to be looking for later this year. Maybe his dad can point him in the right direction again.

Lofty horsepower goals aside, Ramon's CRX never should have been. Enthusiasts with enough passion to overcome multiple thieves, years of waiting, and a parent who's been diagnosed with a life-threatening disease are few. But, then again, none of them are Ramon.

Building Hondas For How Long:
13 years

Greatest Movie Of All Time:
Scarface...or Dumb and Dumber

OMG, It's Got A B Swap!
B-series engine swaps into '88-'91 Civic chassis are no longer exciting. Everyone knows what's involved. Aftermarket swap components are relatively inexpensive. The skill level is minimal. But it wasn't always that way. Those who had the wherewithal to mate their Civic or CRX bodies with B16 or B18 brawn 15 years ago ruled the Honda world. Few knew what was involved. There were no aftermarket swap components, and the skill level was high. What's now regarded as an entry-level Honda engine transplant was once a collaboration of fabrication skills, electrical know-how, and good ol' trial and error. Since companies like HASport had yet to exist, welding skills were prerequisite to B-series swaps. The right-side chassis mount was first lopped off before welding on that from a '90-'93 Integra, which would also serve as a donor for parts like the rear engine bracket and left-side engine mount. And the front mount-if you wanted one-was a custom deal altogether. ECU wiring was equally as difficult, especially when two extra fuel injectors had to be hooked up or important things like VTEC or knock sensors had to be added. Axles were pieced together, shift linkages were cut and welded, throttle cables were ordered, installed, and returned until the right one was found. Those who figured out the process first ruled the Honda world, and they did so in their own right, without internet forum consultation, without guidebooks, without step-by-step procedures outlined in magazines. B-series engine swaps are no longer exciting... if you continue to ignore how it all began.