Anything Is Possible With A Positive Attitude And Mindset

Updated April 2020 - We love builds like this K20A2-powered EM2 Civic - simple and decisive yet speaking volumes with the select top-notch parts it employs. Read on to learn about the cost of quality that endures the test of time.

Purchasing a specific car involves a lot of external factors. Sometimes the price is right, sometimes credit is approved, and sometimes people grow tired of certain vehicles and their doomed fate. It made sense that Mike Reid, out of Wilton, Connecticut, purchased a Honda, which he has always liked for their light weight and body styles. His previously used VW Golf consumed three transmissions, one exhaust, and had multiple wiring issues in the six months he owned the car. To rid the nightmares, Mike purchased a brand new 2005 Honda Civic LX (EM2) and began a four-year journey that he would share with his family and close friends. He also threw $30,000 down along the path in case he needed to find his way back.

Mike's superb taste and keen eye for detail have evolved over the years. He explains that he got caught up in The Fast and The Furious movement. "I bought some underglow lights and my exhaust sounded like a weed whacker" he says in a monotone voice. He then moved on to building a decent looking Civic that didn't have the power behind it. "People used to say, 'Looks good, man, but it's still slow,' and now people just say 'wow. '" Mike began to mature as a car builder through personal experiences, other cars, magazines, and the good ol' Internet.

As the EM2 build evolved, so did his friendships with main contributors Doug Dunleavy and Steve Peters. Mike, along with his two friends, performed almost every install on the Honda. "I do it for myself more or less to learn and I have fun doing it. The hobby is not just how it looks, but working on it as well," he says.

The K20A2 was originally installed by a shop, but Mike and his friends decided to pull the engine and add some extra pizzazz in the form of a wire tuck and a crazy custom green-painted valve cover. "I've always been a fan of flashy valve covers," he openly admits. As long as it's not a company-made valve cover, Mike likes it. Doug assisted with the cosmetics, brakes, and suspension, while Steve helped with the engine and wiring. Mike's younger brother, Colin, also helped as a garage hand by holding parts and tools when needed. 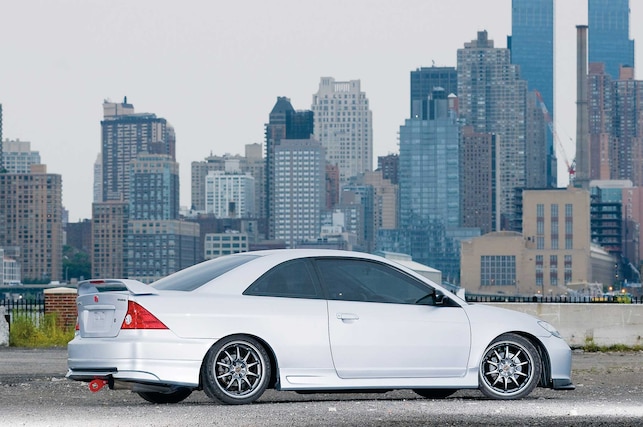 Not only did Mike receive help from his friends and family, but his girlfriend even chipped in and bought him some parts. If this were an intervention reality TV show, she'd be the enabler. At first, Mike calmly explains some of the parts on his EM2 were gifts. Upon further prodding, he opens up like a flea market on Sundays. "She got me the JDM black housing headlights, ARC parts in the engine bay, Takata pads..." and he just keeps going, and going, and going. "I know there's more, hold on," he says.

Mike purchased the majority of parts. However, the Civic build lasted four years because he bought parts when he had extra cash. "I just kind of did it as I got the money," as he explains he didn't set a timeframe for the project. No, he didn't use credit cards. Yes, he only used cash. Mike bucked the traditional system of consuming massive debt for a car build. He modded his Honda at a leisurely and steady pace.

Despite his unorthodox approach, Mike still suffered from the normal tendencies of building a neck-breaking machine. Or as rapper Dorrough would say, "Clean on the inside, cream on the outside, ice cream, ice cream paint job." One day Mike left his home in Connecticut to pick up his EM2 after the first engine install. On the way back home, the throttle cable snapped. He drove back to the shop with a pair of vice grips holding the severed cable together. With the problem solved, Mike jetted to tuner Eric Yosolo in New Jersey. Eric didn't have the right equipment and asked Mike if he'd like to go to Queens, New York. Mike reluctantly agreed and rolled into the DRT NYC dyno shop around midnight. "It's not the safest place for a fixed-up car at that time of night," he says. 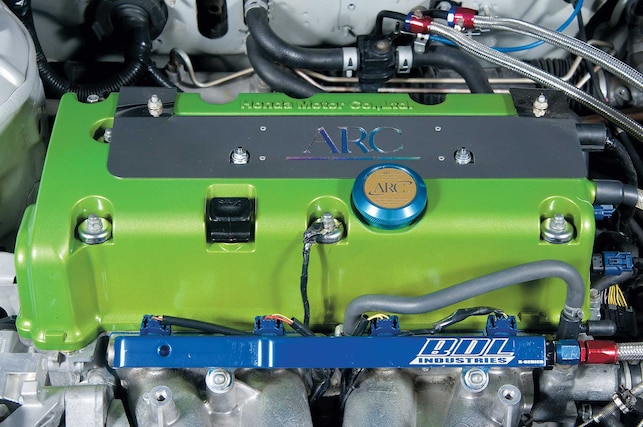 He had his Honda tuned at 3 a.m. He enjoyed the drive home under the rising sun with a freshly tuned Hondata K-Pro ECU to the drumbeat of 223 wheel horsepower. He arrived home exactly 24 hours later from the time he left the previous morning, without a wink of sleep. It's taxing days like these coupled with Mike's focus that kept the build in constant motion.

Disaster also struck three days before the photo shoot. The Honda gods really had it in for Mike this time. Doug had come back to Connecticut to see Mike's finished EM2. Mike was more than eager to take Doug for a spin. The drive came to an abrupt end as the serpentine belt snapped. The car overheated and Mike had to drop the car off at his mother's house that happened to be nearby...and she had no tools. The parts arrived in three days. Mike and Steve stayed up for another straight 24 hours without even a nap to arrive an hour late to the photo shoot. "I couldn't even blink my eyes," he recalls.

Mike has decided to change the status of his silver EM2 Honda to show car. "I rarely bring out the Civic, only on pretty summer days. It's a show car that sits in the garage and collects dust," he says with a slight tone of disgust. He scooped up a '90 CRX with an LS swap to get the groceries. However, Mike is continuing the build. He intends to pull everything off the car and shave every unnecessary hole and hide more wires in the engine bay. "I kind of feel like I have accomplished something," he timidly admits. And he has.

The Price of Quality

There are reasons why dudes like Mike Reid drop two grand on authentic JDM Honda ITR Recaro seats and three Gs on Volk rims for his EM2 Civic. The answer: quality. It's that simple. Companies offering legit products invest a lot in the research and development of their products. These companies are amongst a handful of companies that uphold their products to the highest of standards. They test and retest their products. They do this so the consumer can spend confidently on a worthy product. It's far too easy for a shady knock-off company to duplicate the product such as a JDM ITR Recaro seat. Not only do they copy a company's product, they typically create the stolen design with subpar materials. So that's the math side of the industry. The similarly styled product is cheaper because it has been copied and is usually made with inferior materials. 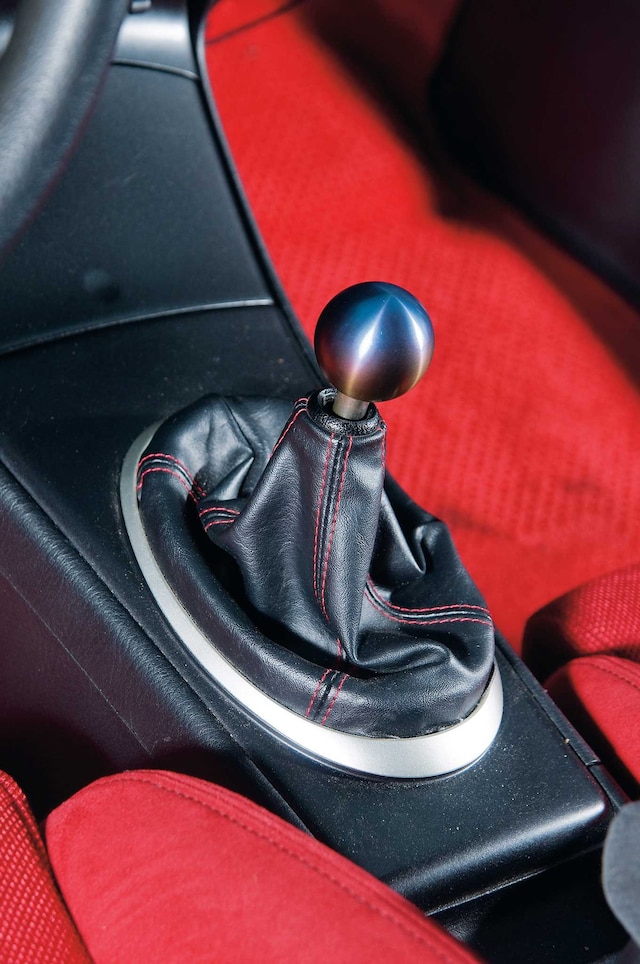 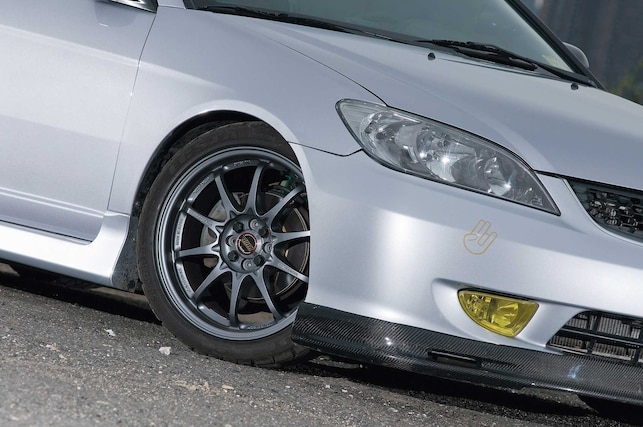 We take a look at 2 special 2005 Honda Civic Sis and their owners: Joe Pham and Jeremiah Santos, 2 EP3 loyalist who have seen it all over the last 12 years

As the overseas marketing manager for J's Racing Japan, Kazuo has some hooks and it shows in his 2005 Honda Civic which has just about every imaginable EP3 part that J's Racing makes on it. - Honda Tuning Magazine