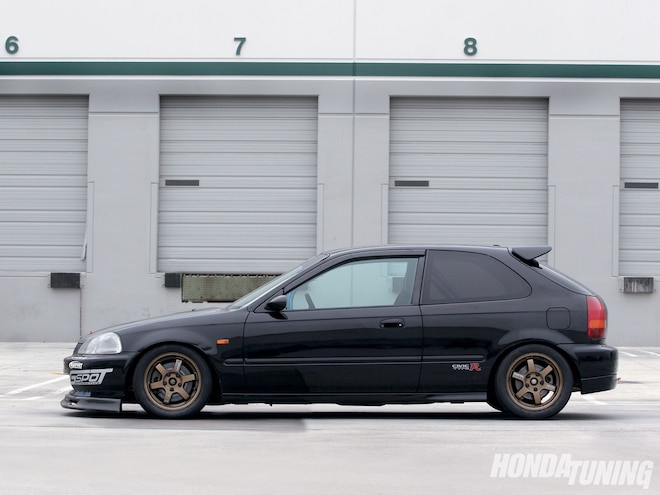 Ryan Novak's 1996 Civic Type R
Two weeks is a short time frame in and of itself. Toss in work, family, friends, school, and that pesky little thing called sleep, and time literally flies by in the blink of an eye. It's always Mom's birthday again or the dreaded tax day. This is precisely why the majority of builds take months, sometimes years, to complete. There is so much to do, so little time, not enough help, and too many parts to purchase during a build. However, being a decade-devoted Honda-head has its perks. Ryan Novak of Torrance, CA, was able to switch up his newly purchased EK9 into a track warrior faster than you can say C-T-R. 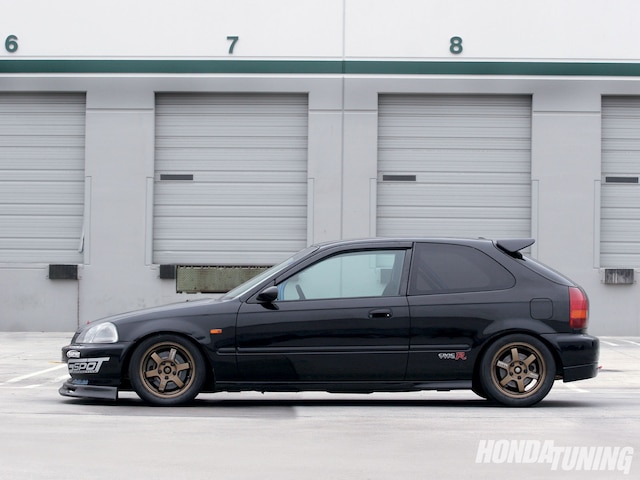 Ryan is an avid track fan. He's owned an extensive list of race-inspired whips. "I don't know how many in total I've had...it has been a lot though," he says. Before Ryan exhausts himself rambling off countless vehicles he's owned or currently owns, he brings up his '05 Subaru STI that he built specifically for the time attack events. The STI had 500 AWD horsepower and was a blast to drive. "I'm just now kicking myself in the ass for getting rid of it," he says. His garage is also home to a '95 Skyline GTR that produces 640 AWD horsepower on plain ol' 91 octane pump gas.

After the Subaru, Ryan purchased an S2000 as another time chasing racecar that he still owns today. He was racing the S2K at a track event when the power-plant threw a rod through the block. This wasn't the first, second, third, or even fourth time that Ryan had experienced a blown motor in his white roadster. In fact, if you read about his S2K in the June '09 issue of Honda Tuning, you might remember that he went through about seven motors before that article was written. West End Alignment owner Darren Nishimura offered to let Ryan drive his track-prepped EF for the remainder of the race session. "At the end of the day, I could not get that car out of my head. I woke up the next morning and started looking for a hatch immediately," he recalls.

Only an hour passed before Ryan's friend Katman found him a potential Civic. He informed Ryan that his homie Frankie just so happened to have one for sale. Ryan met with Frankie later that night and was surprised at what he found. "He had the car blocked in by a bunch of old school cars. When he pulled them out of the way, there it was...a bone stock CTR. I had to have this car," he remembers thinking to himself. Ryan would end up with more than a CTR shell before the ink splashed on the dotted line.

Frankie informed Ryan of his shop, Gspot Automotive in Los Angeles, and Ryan headed there the following day. At the shop Frankie told Ryan that he had a slew of hard-to-find parts. Ryan couldn't help himself. He was at an adult Toys "R" Us. He left Frankie's shop on Monday with a legit JDM K20A, a set of Volk TE37s, and a trunk full of Mugen parts.

On Tuesday, Ryan headed to JHP USA to visit his friends so they could help him secure even more parts. The JHP crew has always helped with Ryan's previous project cars, including his road race S2K. Naturally, the company assisted Ryan with his new EK9 build. "They helped me bring in sponsors for the Hatch, which was a big help," he claims.

The UPS and FedEx delivery men bombarded Ryan's house with new goodies. By Friday, Ryan had everything he needed for the project. He went straight to work and began playing with the wiring setup. "I started getting lost-so who else to call but Katman?" he chuckles. His good friend zipped over in the Kat-mobile, and got busy fabricating a usable wire harness. "He made it look like child's play," he says. Ryan continued working on the Civic and was finished later that week. In sum, two short weeks lapsed between the purchase of the shell and the first day Ryan took the K-infused EK9 out for a cruise.

Ryan mainly tracks the hatch, however, he does occasionally take the burly beast out for some canyon runs. Cruises make for interesting rides as the CTR is equipped with an R-Crew header attached to a Buddy Club Spec-II exhaust system. On one particular spirited run Ryan's friend admitted "he couldn't hear his own radio and he was five car lengths behind me," he laughs. He also says his gnarly exhaust setup is "a big no-no in Southern California."

The simple yet aggressive CTR tears up local road courses, and Ryan's parts selection philosophy aligns with the track-oriented theme of his build. He even chose a knock-off lip because he didn't want to blow $500 on an exterior piece that will most likely make contact with the pavement on a tight corner. What's even more interesting is his engine management selection. "The AEM EMS is so much more adjustable than everything else. It's just a great unit all around. It takes longer to tune...there's just so much more you can do with it I don't even know where to begin," he says.

One specific moment really sticks out in Ryan's mind upon reflecting on previous track days. The showdown between his EK9 and a Porsche 911 occurred at Buttonwillow Raceway. Ryan managed to put the beat down on the Porsche with each passing lap. After the Civic whooped the Porsche, the two speed junkies began talking. "The guy came over and asked a bunch of questions, like how much it cost, and how did it give him such a hard time...I'm sure that guy is out there now looking for a Hatchback," he laughs.

Ryan built the Civic to be simple, fast, and reliable. He recently had M.O.B. Works apply fresh OEM black paint and installed a Blue Print Racing-built K24A2. He admits that out of all of the vehicles he has owned or owns, this is still his favorite one. His only other plans are to "track it until I crash it," he says. Then again, in two weeks he'd be right back at it again.

Building Hondas for how long
10 years

G-Spot automotive
Frankie Gonzalez owns and operates G-Spot Automotive in Los Angeles, CA. Frankie sat on Ryan's black CTR for almost a year before Ryan purchased it. Frankie began importing JDM cars to the U.S. in 2000 from scratch. In 2004, he'd outgrown his home where he originally conducted business, and moved his business into an actual shop. G-Spot serves diehard race fans throughout the U.S. and even abroad. They perform a wide range of services including engine swaps, paint and body work, right-hand-drive conversions, and they specialize in stocking the rarest of JDM goodies. "We have the rarest of the rare bro," asserts Frankie.

The shop is filled with some of todays most sought after merchandise, and walking through their doors is like a Japanese parts collector's dream. Dozens of Mugen exhausts dangling from the ceiling, rows of Mugen wings, and enough yellow and red JDM Recaro seats to accommodate a small village. Hit up the company's website; www.gspotauto.com and take a look for yourself.