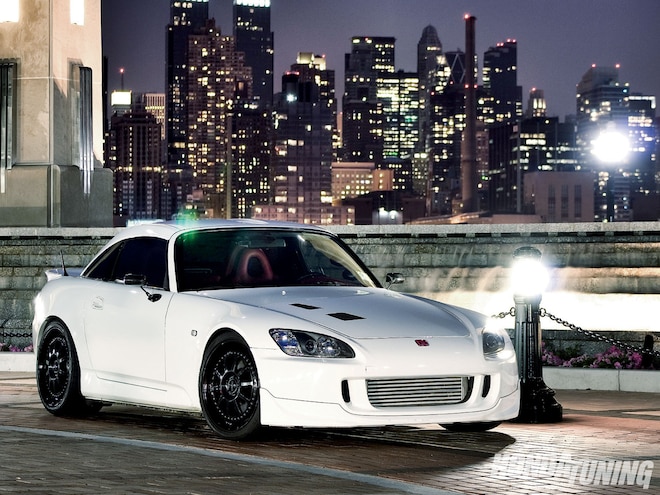 Jeff Devos's 2002 S2000
When Honda released the iconic S2000 roadster in 1999 for their 50th anniversary, hundreds of thousands flocked to local dealers, cash in hand, in frantic attempts to own one of Honda's most enticing cars ever. Production was limited, so it was impossible for every potential buyer to receive one, but regardless, names were placed on waiting lists, bribes were offered-it was clear that people were willing to do whatever it took to own one. 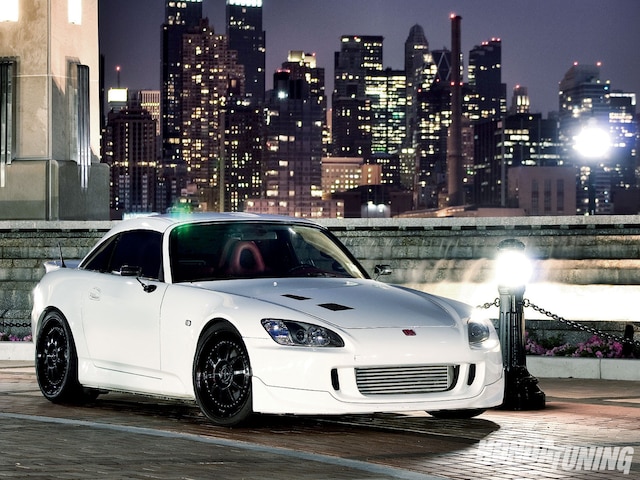 After parting out his '95 Accord in early 2002, Jeff was finally in a financial position to pick up an S2K of his own. "When Honda released the S2000, I had to have one. What Honda enthusiast doesn't want to own Honda's pride and joy roadster?"

Speeding down to the local New Jersey dealership, Jeff threw down a thick wad of cash as a deposit, and placed his order for an '02 Grand Prix White model with red interior. "Rear wheel drive, high revving motor and Honda's racing color combo of white on red is what drew me to it," Jeff said. Everything seemed to be coming together nicely, and he just had to be patient as he anxiously awaited his order.

But after three long months of waiting, Jeff had still heard nothing back from the dealership. "No call, no car...only a feeling that this dream wasn't going to be fulfilled any time soon," Jeff said. A few weeks later Jeff stumbled on an S2000 exactly like the one he had ordered. Same color, same interior, different dealership. As quick as possible, Jeff was on the phone demanding his deposit back for the first car, simultaneously boarding a train bound for Maryland, where his new car was located. "I had purchased it via phone and had no idea what I was getting into," Jeff said. Yet that same day, he signed the papers, threw down some cash, and drove off the lot in the car he'd dreamed of for so long.

Jeff began his relationship with his S2000 the same way so many do: by driving the hell out of it. "The car started out as my daily driver for two years before it became my weekend fun car," he said. All in all, Jeff managed to accumulate 30,000 miles on the car in two short years before he picked up an RSX as a daily driver. From that point on the S2000 was transformed from king of the road, to queen of the garage.

In 2005, with the car paid off, Jeff came down with a moderate case of modification fever. "Like any kid in a candy store, I couldn't resist. I installed a supercharger kit, cold air intake, and exhaust, and really enjoyed the thrill of being boosted for about a year." All in all, the car was built up to Jeff's specifications, including a full suspension setup, stereo, and a pair of Volk 18-inch polished GTPs. He also came upon a Mugen hardtop, Mugen three-piece rear spoiler, and an ACT 6-puck sprung disc clutch.

Unfortunately after all the work done, Jeff was forced to put down his keys and take a long break from driving due to complications resulting from surgery. "I couldn't drive for about six months, and the hope of one day driving the S2000 again seemed unrealistic," Jeff recalled. "At that point, I had my mind set on selling the car."

All hope was not lost when Jeff made a full recovery, and was able to climb back in the driver seat. He hooked up with a local chapter of S2000 owners-and after becoming close to some of the members, he decided to keep the car. "This is exactly what I needed," Jeff said. "A spark to reignite the same passion I had for the car back in 1999!"

His new club membership earned him the right to get behind the wheel of other S2000s, including one member's turbocharged S2K. "I fell in love with the power all over again, and ended up ordering a turbo kit within a week of driving this car," Jeff said.

What started out as a stock S2K has now become a track beast, running a 12.2-second quarter-mile at 133 mph. "I've always had the urge to go fast and had fun with quarter mile events. Making the car a track car was the safest thing," Jeff said.

These days, Jeff is back in full force with his S2000 hobby, spending his time working on other S2Ks along with his own. "The S2K is a limited production car, so most dealerships aren't trained to fix them. From going to meets and events, others have seen the work I've done on my car and asked me for help with theirs," Jeff said. With all the demand for his labor, he decided to start his own company: JDV Motorsports, where he does everything from simple fluid changes to engine swaps to custom engine builds. All the work he's put in on other's cars made Jeff want a little more for his own. Currently, Jeff's got plans to throw a 2.5L stroked motor in his car, with his own built head with Supertech parts.

It's been four years since Jeff began the second phase of his build, and he's poured his heart and mind, not to mention his time and money, into the car to make it what it is today. With a little stroke of luck and a lot of mechanical expertise, Jeff has come full circle from nearly giving up his dream, to making it his life's work-and he couldn't be happier. "Working on my car and other S2000s is not only my passion," Jeff said, "It's my full time job."

Building Hondas for how long
13 years

Turbo vs Supercharger
What's really the difference between a supercharger and a turbocharger you may ask? The differences are minimal; both are advanced air pumps that cram more air into the engine's intake than the motor can take in on its own. Though you'll experience a bit of lag in acceleration with a turbocharger, referred to as "turbo lag" (the amount of lag revolves around turbo sizing), they typically produce higher boost levels, which in turn provides more power. The biggest difference between the two is how each makes boost. While turbochargers use a spinning fan-like turbine pushed by exhaust gasses, traditional superchargers operate using a belt and pulley system.