What do you do when your employers give you the boot? Build a boosted S2000, of course! 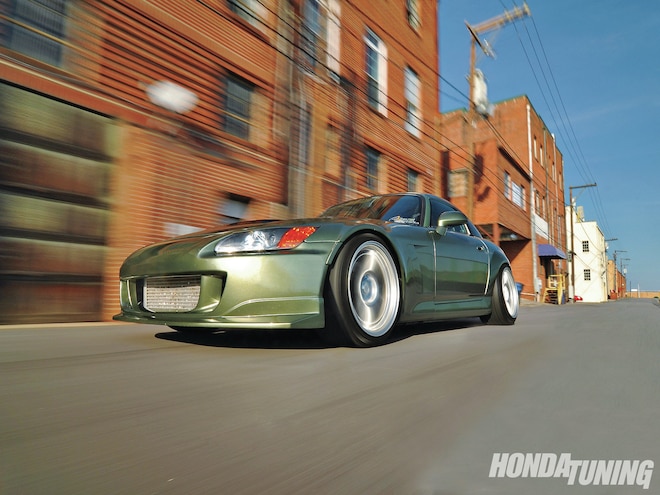 In the last couple of years, it’s become very apparent that our country has been gravely affected by the struggling economy. The dollar has depreciated and companies are slashing jobs on a regular basis, causing the unemployment rate to climb. Things are not good, and that’s putting the situation in the nicest of terms. Within the import automotive community, these struggles are affecting us as enthusiasts. Building and modifying Hondas (and other makes) is a hobby after all, and if there’s no money coming in, then the less important things, like a beloved build, take a back seat to more pressing issues, like keeping a roof over our heads and whether or not we have food on our table. Enthusiasts are still churning out great builds, but there’s no doubt they’re taking longer than usual to reach their completed state. You can, of course, factor in the tendency to be indecisive and the now-more-than-ever competitive nature of the community that no doubt adds to the build time. But money, or lack thereof, is most certainly a major player in all of this. There are still those that just throw caution to the wind and put everything on their credit cards, but like actual dollar bills, they will eventually run out as well. The almighty debt and minimum balance payment will undoubtedly weigh heavy on a builder’s mind. Creditors will then come knocking on the door and all projects will have to be put on hold, or in a worst case scenario, sold off for much needed cash. 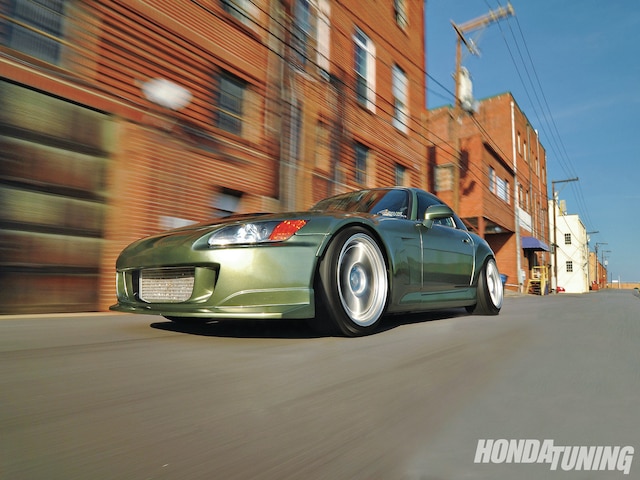 There’s nothing wrong with using a credit card to fund a build, and we’re not here to judge. We are merely bringing to light the fact that the economy is hurting right now and relying on that pesky plastic can sometimes come back to bite you. With that said, there are people out there who have faced these adverse times and made due with what they have—and then there are guys like Blake Minton, who built a turbocharged, widebody, mean-green S2000 at the worst possible time.

“I was laid off in 2003 after working 11 years in the R&D department of a local textile factory,” Blake says. “Thanks to NAFTA (North American Free Trade Agreement), my job was outsourced to China and I was left without employment. At that point I had been modifying Hondas for about nine years and was in the middle of a ’02 Civic Si build. I took the free time to attend a local community college to learn a new trade and chose to try my hand at autobody repair. Long story short, I really loved doing the work but I just couldn’t see myself having a career in that field. During my time in school, I met a guy I became great friends with, and he ended up being a huge part of my S2000 build.”

It would take another four years of work and school before Minton was able to purchase his dream car: an ’02 Honda S2000. He sold his beloved EP3 he had been building and quickly dove into his new roadster. “I added some parts here and there just to make it ‘my’ car. I never really had any intentions to make the car any more than a daily driver. I would attend some meets with friends, but it was definitely no show car. My friends and I decided to attend a local event by the beach, and people were starting to notice my car more and asked me questions about it, which really motivated me,” Blake explains.

Minton had come to the conclusion that he wanted to extract more power from his stock F20C engine, and boost was his power-adder of choice. Unfortunately, his home state of North Carolina had adopted strict OBD-II inspection laws around that same time, which limited his turbo kit options greatly. The GReddy bolt-on kit seemed to be the likely option since it was CARB approved, and Minton placed a call to Vivid Racing to order one. “After the kit arrived, I called Tommy Faw, an old buddy of mine from my textile factory days, and he helped me install the turbo kit. He had become an ASE-certified technician after his days at the factory, so he knew his way around an engine. It was also around that time when I ran into another old friend, Tyrell Francis. Francis was taking autobody repair classes at the same community college I was at, and he eventually started his own business. He offered to give me shop space and autobody expertise so that I could completely redo my S2000. It was an offer I couldn’t refuse. If it weren’t for these two, there’s really no telling where this build would be right now.”

With friends willing to lend a hand and plenty of shop space to use, Blake began collecting parts to give his AP1 a complete makeover. Once parts from APR, Back Yard Special, Seibon, and Shine arrived, Minton and friends started the teardown. Over 200 man-hours were spent on prep work, fitting the new aero components, and molding the ASM rear over-fenders before a new coat of Honda CR-V Green Tea Metallic was applied. The Shine front fenders and ASM rear flares add an additional 25mm all the way around, so the sunken-in Rota wheels were quickly replaced with more aggressive, concave, 18-inch Enkei rolling stock. The look is as aggressive as it is subtle. An unorthodox combination that wows those in the know, and scoots right by bystanders, who merely note its silver wheels and strange whoosh sound.

“This S2000 was and continues to be a true labor of love for not only me, but for my crew and my family,” Blake says. “I had some setbacks along the way, but I think those tough times helped make me stronger and made me appreciate the simple things that much more. I built my dream car, met some great people; what more could a guy ask for?”

Beer, Man
You’re probably curious as to what Blake Minton does for a living now since he was laid off from his job at a textile factory years ago, and the autobody repair career didn’t quite pan out. Well, he eventually did find employment and is happily working for Miller Brewing Company. He serves as a Miller pre-salesman; whose duties involve creating and managing accounts for businesses like bars and restaurants. His daily duties (to put it simply) consist of making sure his business accounts are always supplied with ample amounts of Miller beer. Yeah, it’s absolutely unrelated to his jobs in the past, but life has a way of making people adapt very quickly to new things. You’d be surprised by what people are willing to do to have an S2000 like Blake’s.