The proper procedure for double dipping. 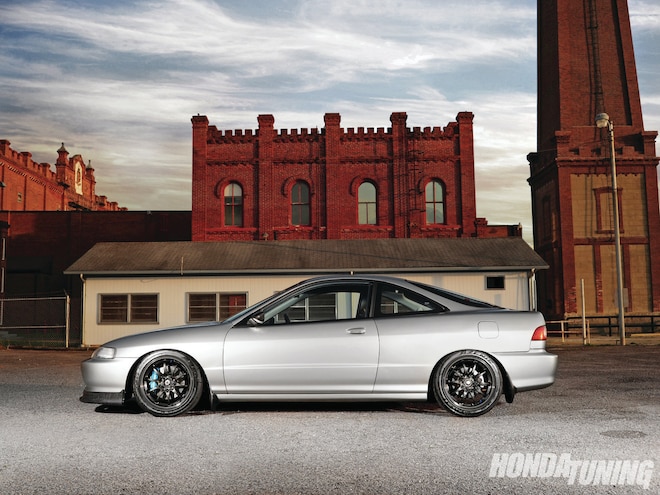 Landing a feature in an import magazine isn’t as easy as it seems. While some assume it’s “who you know” or how much money you’ve spent, the truth is there’s an internal checklist that most editors rely on when choosing a car for print. Some may look for a certain style, impressive power numbers or a unique story, and meeting all of the necessary criteria, without actually knowing what that entails, is always a tough proposition. Meeting all of the criteria twice in the same year is even tougher. 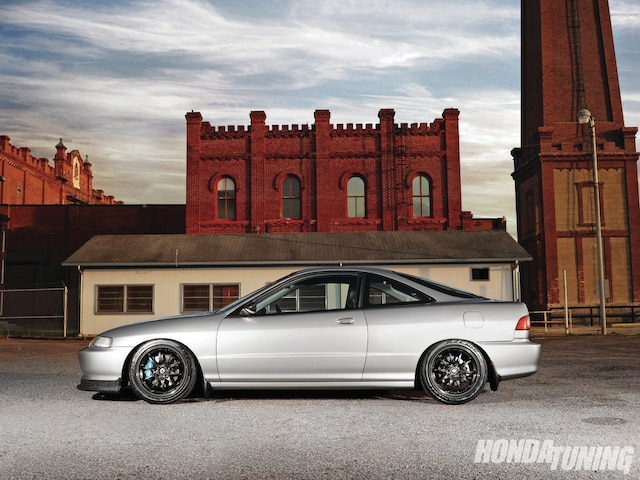 If the name Tuan Chau sounds even mildly familiar to you, there’s very good reason for it. His name was attached to a slick green K-powered hatchback that appeared in the pages of HT earlier this year (April 2011), and though it was gorgeous, we think he has outdone his previous build with his latest creation.

Chau’s had a longing for an Integra for years and already had experience with a few USDM front fascia-equipped versions but felt it was high time he tried a different approach. He adds, “I’ve always wanted a JDM front Integra since I was about 15 years old. Always having U.S.-spec versions, I decided it was time for a change in my life.” The basis for Chau’s newest build was located in Seattle, quickly purchased and then shipped to his hometown of Columbia, South Carolina. Once it arrived, there were a healthy number of pros and cons that would have to be taken into consideration before moving forward. “It already had a K20 swap, but there was a big mess in the bay. There were brake lines everywhere, the wiring was like a rat’s nest; it didn’t look so great. I tried to ignore all of that since I’d already had big plans for the car.” Aesthetics aside, an impromptu test of the car was in order to gauge overall performance and condition of the vehicle on the road. A hard run through the gears resulted in a rather obnoxious knock that was anything but normal. Rather than limp the car back to the shop with crossed fingers, a truck and trailer was used to transport the injured Integra just minutes after its maiden voyage no less. The very next day a full investigation took place, and Chau found that the source of the grim tone was in actuality a spun rod bearing. Rather than sulk and replay the “shoulda, woulda, coulda” scenarios, he had the engine removed, and the new build was officially underway.

When referring to project cars, the term “ground up” is often used casually, and without merit. This wasn’t going to be the case with Chau’s latest build, and a full teardown began almost immediately in anticipation of a proper color change. Out came all of the interior plastic and factory fibers, every inch of convoluted brake line, both doors and all of the factory glass. The naked chassis was then turned over to the local paint shop, where a few cans of Toyota’s sultry Quicksilver paint was set to be fired at the GS-R. Not wanting to waste any precious second, Chau used the free time gained by the separation of car and builder to create an almost comical list of necessary factory parts that would no doubt overwhelm even the most savvy parts counter employee. “I went to Acura and ordered all-new exterior seals, grommets, roof rails, door seals, even new quarter glass for both sides.”

Once the freshly painted chassis arrived at the shop, Chau jumped into the engineless bay and began mapping a path for the brake lines that he would painstakingly bend by hand in search of functional and visual perfection. On the heels of the intricate hard-line work, a serious wire tuck accompanied by relocating the under hood fuse box inside the cabin took place, and attention could finally be turned to putting the car back together. “I reinstalled the doors, all of the glass and new seals, and it started to look like a car again. But even after all of the hours I’d already put into it, I knew I still had plenty to do.” Chau ditched the stock 4x100 suspension setup in favor of a more efficient ITR five-lug conversion complete with Spoon calipers, installed his beloved JDM front end, and made his way inside the cabin to put the finishing touches on the interior seals, panels and dash.

Satisfied with the cars interior and exterior, the most important factor was yet to be accounted for: the powerplant. “I was focused on doing another K motor, and since I’d already planned on doing a new K24/K20 combo on my green Civic (previous feature car), I pulled its current K20 and installed it into the DC.” To round out the build, a set of blue DC5 Recaros and Volk CE28 wheels were installed during a lengthy wait for an authentic Spoon front lip and side mirrors.

As good as the factory K20 is, there’s always a desire for more power, and a Jackson Racing supercharger would provide a substantial bump in torque—perfect for a daily driver.

After 10 years of building, a number of past project cars and an obvious knack for piecing together some serious neck breakers, Tuan Chau is earning a well-deserved reputation for his hard work. “After all was said and done, I daily drive the Integra, attend events like ImportAlliance, and I even auto-X the car where it does great! Next up are a few runs down the quarter-mile to see how it does.” Is this the last we’ll see from this legitimate double dipper? Don’t count on it…

What do you mean by “proper color change”?

Like most things automotive, there’s more than one way to go about something. When talking about paintwork and color changes, some tend to skimp on the details to save time and money. A good paint shop can tape off moldings and plastics, then prep and paint the entire car a new color. A great paint shop won’t even bother. That is, they’ll insist on having the windows, moldings, lights, etc. removed from the body to properly apply paint to every nook and cranny—a truly complete color change. Yes, there’s far more work involved, but the results, like Tuan Chau’s Integra, speak for themselves. 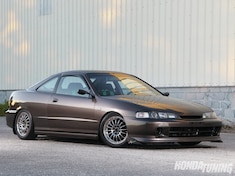 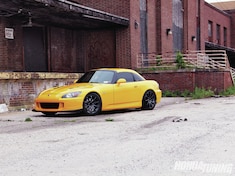 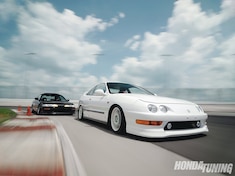 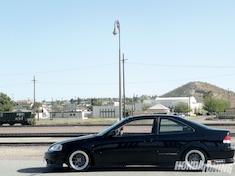 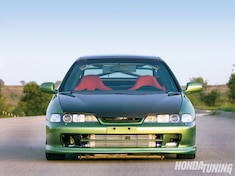 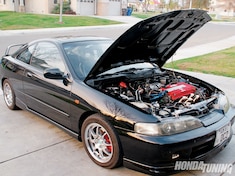 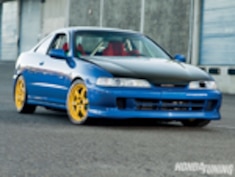