The results of owning and driving the same type of car for over 20 years. 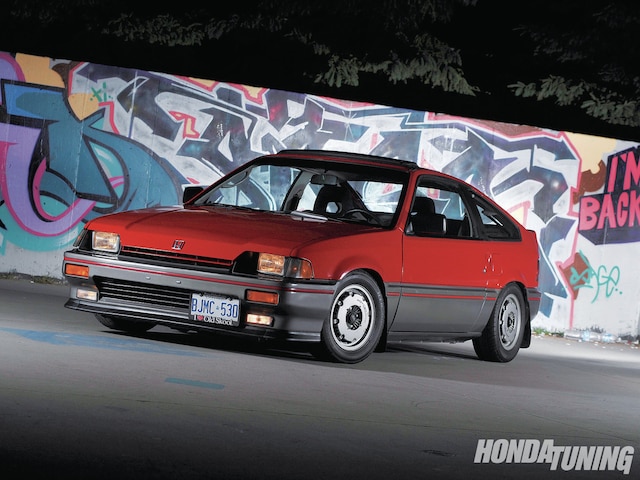 The ’84–87 or “first gen” CRX is a rare breed indeed. Roughly 25 years old, they’ve become somewhat of a collector’s item for those with a soft spot for the sporty, ’80s-era two-seater. And to be quite frank, there aren’t a whole lot of them running around in pristine condition. In fact, you’d be hard pressed to find one without a cracked nose panel, rusted arches, or paint so faded that it could double as a chalkboard. Mark Wanzel of Ontario, Canada, is no stranger to this era of Honda lineage. He’s owned CRXs since he first started driving at the ripe young age of 18. Now 38, he’s had over two decades of seat and wrench time on this particular chassis. The CRX you see pictured wasn’t hibernating in a time capsule, Mark just knows a thing or two about maintaining these micro machines and this happens to be his third.

For this build, Mark wanted to make sure he selected “period-correct” parts, as he refers to them. “When you build a car this old, you follow a different set of rules.” If the part doesn’t come from the CRX’s time period or doesn’t seem to fit the overall subtle theme of that era, it’s simply not considered.

Finding parts for this car is a constant challenge, and Mark never stops searching. Parts on this project have come from all over the globe, including Canada, the U.S., Japan, and even Australia. The web forum Red Pepper Racing (www.redpepperracing.com) was heavily utilized for research and part sourcing. In the end, Mark was able to complete this build for under $10,000—a major feat compared to more modern bank-busting projects. “If you’re smart, building a car like this doesn’t have to cost you the farm. Patience will save you money,” he says from experience. One of the more precious items found along the way was the Mugen EDM rear spoiler. Mark caught wind of a guy online who owned one of these coveted relics, a true treasure to first-gen aficionados. Even better, the spoiler was still in its original packaging, and contained the original hardware along with the original installation instructions. The box was sitting in this guy’s closet and had been for quite some time. Given that the part was so rare and in immaculate condition, naturally, the owner didn’t want to let it go. Mark had to have the spoiler, and over the period of a few weeks was able to convince the owner through financial incentives ($800) and intense persuasion that it was a moral obligation to the greater Honda collective.

Although the majority of the parts on this CRX are associated with the mid-’80s time period, purists are quick to note the newer powerplant. “Some gurus say I should have the original engine, and I kind of agree with them. But taking this car on cross-country trips, I had to have more reliability and, to be honest, the additional horsepower is just fun!” Mark selected a B16A mated to a JDM S1 transmission. A ’91 Integra LS fifth gear was chosen to calm the 1.6L on the freeway. Mark and his friend Tyler Noseworthy installed the engine using custom axles, while engine mounts were ordered from HaSport. A Rywire OBDI engine harness was sourced along with a chipped P06 ECU. The most challenging aspect of the swap was a mental hurdle. In order to make room for the new powerplant’s alternator, Mark had to modify the driver-side frame…with a hammer. This modification would permanently alter the Rex’s physical integrity forever. There was no turning back after this was done.

There are no major changes planned for this ’85—again, another deviation from most builds. If Mark could be granted one wish, he’d throw down some serious stacks on a JDM ZC hood. This OEM hood has a slight bulge in it for timing belt clearance, making it slightly more aggressive than his current OEM hood line. For now, Mark wants to simply enjoy seat time with the car. He logs serious long-distance miles when he’s not driving to and from photograph gigs on the daily grind. “I’m a firm believer that if you have a nice car, you should drive it.” The CRX recently returned from a 10-day, 6,000-mile cross-country trip. He left Canada and headed south to the U.S., through Tennessee, Louisiana, Texas, New Mexico, Arizona, then across the Midwest before returning to Canada. It was in Utah that the CRX experienced its first snowstorm. Mark’s friend Tyler had to calm the 20-year Rex vet down. “Don’t worry, there’s no salt,” Tyler reassured. “When we got back, although we couldn’t do the trip again, we felt like the Rex was ready for another one,” he laughs. The car performed flawlessly throughout the entire journey.

Now at 38 years of age, things like family are becoming more important to Mark. “I’ve noticed my 5-year-old son taking a shine to the car lately which might keep me twisting wrenches on my CRX for a few years to come,” he says. It’s highly likely this old but gold project may have a new legacy down the road. Until then, Mark is simply going to keep enjoying his pristine CRX, one mile at a time.

Red Pepper Racing
Red Pepper Racing is an online forum devoted to the first-generation Honda CRX and the third-generation Honda Civic—Hondas built between 1984 and 1987. Tom Lichiti created and maintains the website that serves as a second home to over 7,000 registered users. That may not seem like a big number compared to some of the more popular Honda forums, but considering the main focus of the website is a niche segment within Honda’s product offering, it’s quite significant.

If an ’84–’87 Civic/CRX enthusiast is looking for OEM, aftermarket, or custom parts, expert advice, wrenching tips, build threads, etc., there’s no question that this is the place. Remember, these Hondas are roughly 25 years old and parts are becoming increasingly difficult to source. “Users enjoy that the forum is laid-back—I leave it up to people to behave themselves. And if they don’t, the community will self-correct,” Lichiti says.

Check it out for yourself by visiting www.redpepperracing.com.

Honda Tuning
Saying Goodbye to the Lexus GS F (Until We Can Afford One...)
After more than 30 years and four generations, it's finally time to say sayonara to the once-popular, midsize luxury sedan, known as the Lexus GS.
Sam Du – Sep 24, 2020

Honda Tuning
Cute & Smart: 2020 Honda e is a Modern EV Version of the Original Civic
Ever since the late '80s, Honda has dabbled in electrified vehicles, but the 2020 Honda e—their all new, fully electric offering—is a deep dive into increasingly crowded EV waters.
Rodrez – Sep 24, 2020